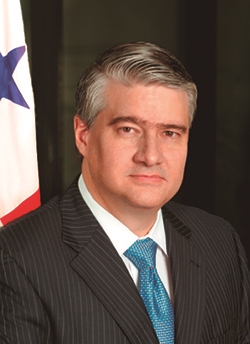 A graduate of Florida State University with a degree in Business Administration (1984), Dulcidio De La Guardia holds a Master of Business Administration from Loyola University (1986), New Orleans, and received his Charter Financial Analyst (CFA) from the CFA Institute Charlottesville Virginia in December 2000. In 1990, he joined the Panama Stock Exchange as Development Manager. In July 2002, he joined Primer Banco del Istmo (Banistmo), as Vice-President of Investment Banking responsible for corporate finance, M&A, fiduciary services and brokerage operations. In 2005, he was promoted to Executive Vice-President and Head of the regional banking unit. In 2006, he oversaw the merger of HSBC (Panama) and Banistmo banks, and was appointed Director of Corporate Banking and Markets. In September 2007, he was appointed Director of the Private Bank. On July 1, 2009, he was appointed Deputy Minister of Finance of Panama.

What is the general financial strategy planned by the Ministry for the next five years to maintain the sustainable and solid growth of Panama’s economy?

A document known as the Medium-Term Fiscal Framework provides estimates about the performance of the economy. The government is aware that in a market economy, state intervention aims best to ensure the stability of public finance, debt sustainability, and the implementation of policies that support private sector decisions in accordance with national growth objectives, social inclusion, and a strong society. To achieve these objectives, we are currently hiring a high-level consulting firm to set the roadmap for the government over the next five years. This work is called the Government Strategic Plan (PEG), where we will bring together structural and long-term analyses to develop best practices and policies.

What are the advantages of investing in the Panamanian banking sector, and what is the role of the Ministry of Economy and Finance in attracting foreign investment to the International Banking Center?

Given the economic structure of the country, the Banking Center is an essential pillar in national policy. The strong momentum in the expansion of aggregate demand is largely due to the Banking Center funding provided to economic agents in the country. Investing in Panama presents the financial sector with important advantages, among which are the absence of exchange rate problems, and the integration of banking with other segments of the financial services segment, which are currently expanding and to which we are devoting our attention in order to support their sustained development. These financial services include business insurance, reinsurance, and bonds, among others such as a reasonable tax structure, inter-industry links developed with other international sectors within the service industry, and the governmental commitment to ensure conditions of social harmony. If we analyze the composition of FDI, we can see that 28% of the $4.65 billion that came in 2013 were reinvestments and the investment earnings of the banks located in Panama.

What are the main challenges facing the financial sector at present, and what kind of regulatory improvements are being made?

The financial sector here faces the impact of problems in developed financial markets that have yet to be solved. In addition, we do not have the same regulatory pressures that developed countries put on their financial systems. The concerns related to these regulations on the flow of activities, in terms of additional, explicit, and implicit costs, and their impact on the rest of the world are widely known. Panama has been included on some grey lists for presenting some weaknesses in our economic systems as compared to the standards that the OECD and FATF promote. In this regard, Panama is aware that its leading role in regional business, its international financial community membership, and its integration into the global trade and finance markets are highly sensitive issues when it comes to these perceptions. As long as the country does its best to improve perceptions of our systems, which is something we are already doing, we are confident that the economic ratings our systems have received should not have an impact in the medium to long term.

What is your general outlook for the finance sector in the medium term, as well as your expectations for economic growth over the coming 12 months?

The IMF expects Panama to grow 7.2% in 2014, and 6.9% for 2015 according to the World Economic Forum, although those forecasts are likely to be revised downward given global uncertainty, especially resulting from the recalibration of the Chinese economy and its impact on the commodity-exporting countries of the region and international geopolitical tensions in the Middle East and Russia. In this regard, our growth expectations are in the order of 6.5%, based on our budget estimates. Locally, the financial sector will continue its upward trend in view of the expectations of the Latin American region in the country. In fact, in March 2014 the local national banking system’s loan portfolio increased by 9.4%. However, there are complications in the industrial portfolio and the FTA, and this has reduced the commercial and industrial loan portfolio.

Which strategic sectors besides mining and construction will lead growth going forward?

We believe that the sectors to highlight for future economic growth are tourism and financial services, as both industries have increased their GDP share contribution over the past decade. We are also in the process of revitalizing the agro-industrial sector (as shown in the strategic plan of the new administration), a key element of plans to revitalize the economy. This sector’s contribution to GDP has declined over this timeframe. Transport, storage, and communications today represent 20% of our GDP, and the logistics sector is composed of a variety of industries that have strengthened and transformed our country into a logistics platform of interconnectivity for the Americas. The cluster includes the Panama Canal, the nation’s ports, and air and land transport infrastructure. In recent years, the growth rates of these segments have been in the double digits. In 2014, the sector has been growing at a rate higher than 15%, and although it is a sector that is sensitive to developments in international trade, it has proven to be capable of withstanding adversity thanks to a diversified approach to services and customers, as was shown during the international crisis. These are the factors that encourage us to conclude that growth will continue steadily with the implementation of the expansion of the canal, and that the continuity of developments in port infrastructure and the construction of new airport terminals. Panama will continue to develop its vision and to leverage its natural competitive advantage, and its unique natural location.