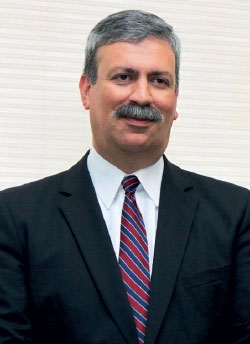 Since his appointment as CEO of ProMéxico on June 10, 2013, Francisco N. González has overseen Mexico’s efforts to promote exports, secure FDI and internationalize Mexican businesses. He holds a Bachelor’s degree in Business Administration from Instituto Tecnológico Autónomo de México and a Master’s degree in Business Administration from Instituto Tecnológico y de Estudios Superiores de Monterrey and a second Master’s degree from the University of Texas at Austin. His pedigree in promoting Mexico abroad is reflected in his numerous instrumental roles since 2002, among which were Commercial Counselor for Germany, Central and Eastern Europe for BANCOMEXT; Regional Director for Europe, the Middle East and Africa for ProMéxico; and Ambassador of Mexico to the Federal Republic of Germany.

Share on:
What is your overall strategy to strengthen your services and increase the number of trade offices abroad? The strategy we follow at ProMéxico aligns with the goals set by the […]

What is your overall strategy to strengthen your services and increase the number of trade offices abroad?

The strategy we follow at ProMéxico aligns with the goals set by the National Development Plan and the Innovative Development Program 2013-2018, and responds to the cross-cutting themes of the current government: democratization of productivity, gender equality, and the government’s closeness to the people. Hence, ProMéxico contributes to the creation of an inclusive, prosperous, and globally responsible Mexico. Our role is to drive Mexico into the business arena as a leading global player.

One of ProMéxico’s key tasks is to capture productive projects from abroad; projects that create jobs and encourage national development. In addition, we have designed and implemented different business models and services aimed at attracting investment both from foreign companies looking to venture into the country and from companies already established here seeking to invest in new projects. ProMéxico is recognized worldwide as a government entity dedicated to the promotion of international business, the Mexican agency that supports the effective realization of global economic projects. Through 45 overseas offices we have been able to position Mexico as an attractive investment destination. We have a portfolio of support programs and services that enable national and foreign investors to participate in business summits to promote Mexico or realize commercial delegations to countries with whom there is interest and opportunities, through travel grants, receive specialized information about Mexico or specific sectors, and connect with companies and government entities abroad. ProMéxico is an agency that generates meetings and encourages successful business between Mexican business owners and entrepreneurs from any country in the world.

How would you assess the current level of FDI in Mexico? What countries are showing an increasing interest in Mexico?

In 2013, FDI rose to $38.2857 billion—according to figures from the Ministry of Economy and the UNCTAD—which was a historic record that placed us among the major recipients of FDI. Furthermore, between January and March 2014, we have received around $5.821 billion in FDI. This figure is 17% higher than the preliminary amount reported for the same period in the previous year of $4.988 billion. In these two years, investment from Germany, Japan and Netherlands has remained steady; last year, investment from Belgium was higher than from the United States, while this year investment from Spain has grown significantly. Some countries are strengthening their presence in the country, such as Luxembourg, have now begun to appear with representative percentages. In recent months we have received interest from China, India, Italy, Korea, Norway, Portugal Saudi Arabia, Taiwan, and United Kingdom, among others.

“There is no doubt we are experiencing Mexico’s moment. The country has seized a key historic opportunity based on the recently adopted structural reforms.”

What are the main investment incentives to attract capital flows to the country?

Some of the main competitive advantages that Mexico presents to foreign investors are: a young talented and skilled workforce, favorable business environment, competitive costs in North America, and modern, world-class infrastructure. We are a leading exporter of high technology and advanced manufacturing; thus, industries that require greater capacity and precision are beginning to locate in Mexico.

Mexico is one of the most competitive countries for productive investment in the world due to its macroeconomic and political stability, low inflation, size and strength of the domestic market, and economic growth rate.

How would you describe the importance of the energy and telecommunication reforms as a tool to promote Mexico as an investment destination?

It is important to highlight that the recent structural reforms implemented by President Enrique Peña Nieto’s government, among which are the two you mention, respond primarily to an urgent need to modernize the legislation relative to a number of national sectors, so that they become more competitive, and as a result, more productive. This, in turn, will translate into greater prosperity for the Mexican society. The reforms were designed and will be implemented, beyond promoting Mexico as an investment destination, to modernize certain sectors in order to continue to respond to the country’s growing needs.

What are the main sectors of the economy that hold particular potential and opportunities for international investments?

Although the first transformative reforms concern certain production sectors, all sectors are a priority for our current government. Some have a prominent history, as is the case with manufacturing in general, and others are just coming into their stride, such as the aerospace sector and the creative industries. The sectors that have recently drawn the greatest attention from foreign investors are agriculture, energy and environmental technologies, health, creative information and communication technologies, knowledge technologies, transport and heavy manufacturing, and infrastructure.

What are the advantages of Mexico as a manufacturing country, but also as a center of innovation and creativity?

Mexico is the foremost Latin American destination for establishing information technologies (IT) service companies. It excels in areas that include government support, costs, cultural affinity, and human resources. Furthermore, Mexico has firmly established its global position in this sector and currently occupies fourth place as a global IT provider.

Over the past decade, the average annual growth rate of engineering graduates in Mexico was 7%. According to National Council of Science and Technology (CONACYT) estimates, 111 thousand engineering and technology students graduated in 2012.

In addition, Mexican creativity is renowned the world over. Aware of its potential and the strategic role of the creative industries, Mexico is determined to position itself as one of the world’s major players and become Latin America’s hub of excellence for the production of audiovisual and interactive content. Mexico has world-class audiovisual production facilities, such as Baja Film Studios, which has the biggest water set in the world, and Estudios Churubusco, whose trajectory is renowned throughout the national and international film world.

Audiovisual production and development costs are very competitive; according to KPMG, Mexico is 37.7% and 38.9% more cost-competitive compared to the US for software development and digital entertainment, respectively.

How would you characterize the importance of Mexico as a logistics hub?

Mexico is a major, global, high value-added logistics center due to its network of free trade agreements; our country has a strategic geographic location, close to the world’s major ports. We have the lowest average of port-to-port days and are connected to Asia, Europe, and South America thanks to our Atlantic and Pacific coastal ports. Our infrastructure and strategic location translate into better overall costs and greater competitiveness for companies. We have 117 sea ports, 64 international airports, more than 26,000 kilometers of railroad, and around 372,000 kilometers of road.

Mexico is a business partner for those companies whose aim is to serve the North American market. We are part of the biggest economic bloc in the world (NAFTA), which represents $18 trillion dollars. We have more than 50 overland border crossings with the United States and logistics corridors that allow us to connect rapidly with the western and eastern parts of the United States and Canada. Mexico is a great option for those companies planning to establish production centers beyond their own territory: in addition to its logistics infrastructure, Mexico has a highly trained workforce with advanced manufacturing expertise and one of the most competitive cost structures in the world.

Our country’s platform of international treaties enables not only the attraction of investment for production, but makes it possible to export from Mexico to anywhere in the world.

Mexico is on an excellent path. During the first half of the year, it received FDI inflows of $5.8 billion, a figure 17% higher than the preliminary amount reported for the same period in 2013. This is evidence of the growing confidence of investors in the economic future of our country.

The most important factor of the investments is not only their amount, but their impact on job creation and their repercussions on national economic development. In this context, it should be emphasized that the country receives investment mainly in advanced manufacturing sectors, which creates better-paid jobs and generates a greater capacity for knowledge transfer. ProMéxico undoubtedly encourages foreign direct investment with a high-technology and innovation content.

We know that Mexico has many strengths. We want to further promote them in the world’s business community. An example of this is Mexico’s leadership in medium- and high-technology production, as well as in the agrifood industry.

There is no doubt we are experiencing Mexico’s moment. The country has seized a key historic opportunity based on the recently adopted structural reforms. These changes and political agreements will trigger unprecedented progress to boost the integrated development of the country in the short and medium term. These structural reforms will allow a more promising future in terms of attracting FDI. ProMéxico will continue to promote the export of products and services to contribute to the country’s economic and social development and the strengthening of Mexico’s image, and to push Mexico’s recognition as one of the best business destinations in the world.