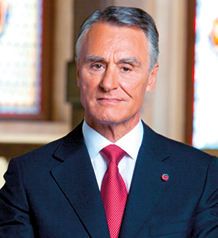 A relationship that unites

Aní­bal Cavaco Silva was the 19th President of the Portuguese Republic. Silva achieved two absolute majorities in legislative elections and exercised office as Prime Minister between 1985 and 1995. In relations with the Portuguese speaking world, Cavaco Silva has promoted changes targeting the democratic stabilization of African regimes, sponsoring Angolan peace negotiations, and supporting similar processes in Mozambique. It was also under his leadership that Portugal spearheaded the creation of the Community of Portuguese Speaking Countries (CPLP). Aní­bal Cavaco Silva earned a Degree in Finance in the Lisbon Higher Institute of Economic and Financial Sciences (ISCEF), and holds a doctorate in economics by York University, in the UK.

Share on:
Aní­bal Cavaco Silva, Former President of Portugal, on political and economic links, the importance of common goals, and the uniqueness of the countries' relationship.

In the year of the 40th Anniversary of Mozambican independence, the relationship between our two countries has acquired a dynamism never before seen, and we now enjoy an undeniable proximity. We have, on both sides, the political will necessary to promote the deepening of our bilateral relationship and to facilitate contact between the various institutes, entrepreneurs, and artistic and cultural leaders, and, above all, between our brother nations. The ties that bind us together have an exceptional character, because they are fundamentally based on friendship and mutual respect.

The visit of His Excellency represents another important contribution to reinforce the political, cultural, and economic links between our nations. I would like to highlight the dedication that we have put into the Portuguese Presidency of G-19 in relation to our support for Mozambique’s State Budget. We will try to contribute to the strengthening of the country’s development as promoted by the Mozambican Government. The Portuguese commitment to remain a trustworthy cooperation partner of Mozambique’s is equally serious.
We live in times marked by a certain level of instability and of serious threats to the rights, values, and freedoms that have represented such a remarkable contribution to the improvement of living standards throughout the world. In the face of challenges such as terrorism, human trafficking, and other brutal demonstrations of intolerance, the example of relationships between countries that search for stability, friendship, mutual respect, and the common good has become increasingly important. These are the relationships that unite Portugal and Mozambique. In this changing world, it is difficult but necessary to reinforce—especially among young people—the values of stability and dialog, as well as the basic principles of peace, democracy, human rights, and economic and social development.

This is also the reason why the relationship between our countries can be considered a unique asset, both from a political perspective and from the perspective of the contacts between our citizens and of world of commerce. The Mozambique-Portugal Business Forum clearly contributes to the encouragement of commercial and investment links between both countries. In a time when Portuguese enterprises have been evidencing their capacity and competitiveness by opening up to new markets and by establishing new partnerships, Mozambique deserves special attention. The economic dynamism foreseen for Mozambique in the coming years, further strengthens the opportunities that tend to emerge from its economy. Most of the Portuguese enterprises had chosen to invest in Mozambique long before the exciting perspectives of natural resources became known. Portuguese entrepreneurs did not wait for the coal and gas discoveries to give proof of their trust in Mozambique as a country that is really worth investing in.

Statistics from the Investment Promotion Centre in Mozambique have allowed us to analyze how the Portuguese community and their investments have contributed to the Mozambican economy. Portuguese direct investment has reached almost $1.745 billion, and Portuguese investors have created the most jobs in Mozambique out of all foreign investors. The number of jobs created by Portuguese investors has reached 42,000 since 2008. I believe that this data is sufficiently expressive and exemplifies our entrepreneurs’ faith in Mozambique. We are convinced that together, we will go further, with a sense of partnership and mutual advantage. Although the economic dimension is naturally important in the relationship between Portugal and Mozambique, our connections are far from merely commercial in character.

As I have already had the opportunity to mention, Portugal and Mozambique are also united by friendship. This friendship is only possible between nations that know each other well, and which value and respect each other. The relationships between the civil societies of both countries bring, in this matter, an essential benefit. However, it is the cultural and artistic creators that are the ones we have to thank for fostering the knowledge and admiration which we have for one another.