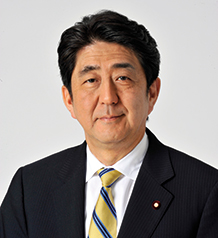 Abe was elected Prime Minister of Japan in 2012, marking his second tenure since the 2005 election. Upon graduation from the Department of Political Science at the Seikei University Faculty of Law, he initially worked at Kobe Steel, Ltd., although his distinguished political career began in 1982 with his appointment as Executive Assistant to the Minister for Foreign Affairs. Other senior positions held have included Director of the Social Affairs Division, President of the Liberal Democratic Party (LDP), and Chief Cabinet Secretary.

Share on:
Shinzo Abe, Prime Minister of Japan, on the importance of the growing partnership between the two countries, especially for energy, construction, and FDI.

Mozambique is a country brimming with dynamism that is now working to transform itself to rest at the very heart of Japan’s business with Africa. Mozambique is home to one of the largest natural gas fields in the world and one of the largest coking coal fields in Africa. I am firmly convinced that cooperation between Mozambique, blessed with an abundance of resources, and Japan, with its highly advanced technological capabilities, will without any doubt result in greater wealth for both nations.

Bountiful resources and the wealth to be acquired through their use are Mozambique’s very own treasure. The benefits must be shared by the Mozambican people and mobilized to engender sustained growth and improvements in the daily lives of the people. Japan’s public and the private sectors can be of assistance in bringing this about. A good example of this is Mozal aluminum smelter, which through the participation of the Mitsubishi Corporation has now become the largest industry in the country. With technical transfers to the smelter site, Mozal has generated direct employment for more than 1,000 people and indirect employment, including in peripheral industries, for more than 10,000, and returns profits to the community through social activities in the local area. This is what occurs when Japanese corporations invest.

Mozambique is able to secure technologies through commercial relations with Japanese corporations. It promotes the development of industries through its own efforts, and a large number of Mozambicans enjoy the benefits of growth. It is for these reasons that the government of Japan makes use of ODA and other types of public finance and makes contributions in cooperation with private companies.

First of all, Japan will contribute to human resources development. In order for the people of Mozambique to develop resources, foster industries utilizing those resources, and take environmental countermeasures through their own efforts, Japan will support human resources development by assisting over 300 people over the next five years, through the African Business Education Initiative for Youth (the “ABE Initiative”) announced at the International Conference on African Development (“TICAD V”) and the “Development Initiative Based on Natural Gas and Coal.”

It is also important that the development of resources does not give rise to economic disparities among local areas, or environmental issues. Japan will provide comprehensive assistance of approximately 70 billion Japanese yen ($585 million) over the next five years, with a view to advancing development centered on the Nacala Corridor region. We will strengthen our support for infrastructure development, including among other areas roads, ports, and electricity, as well as for education, health, and related areas from the perspective of human security.

If we combine Mozambique’s efforts, including further improvements to the investment environment, with the support of Japan’s public and private sectors, we will be certain to build a relationship as partners that contribute to growth in both countries.