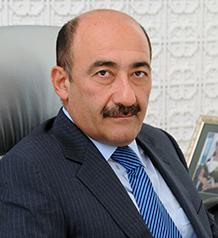 A Weekend in Baku

Abulfas Garayev has been the Minister of Culture and Tourism since 2006. Previously, he held the position of Minister of Youth, Sport, and Tourism from 2001 to 2006 and Minister of Youth and Sport from 1994-2001. He has been the chair of the Organizing Committee of the World Forum on Intercultural Dialogue since 2011, and co-chairman of the Intergovernmental Commission on Cooperation between Azerbaijan and Cuba since 2009. He received his PhD in philosophy and culture from the Academy of Social Sciences, Moscow in 1992, and degree from University of Foreign Languages and Pedagogy, Baku in 1978. He is the author of several books and has been an Associate Professor of the Azerbaijan Tourism Institute since 2006, and is fluent in Azerbaijani, Russian, English, Turkish, and French.

Share on:
TBY talks to Abulfas Garayev, Minister of Culture and Tourism, on hosting major international events, attracting tourists to the country, and how the Ministry promotes the country.

Baku was the inaugural host of the European Games in the summer of 2015 and the Formula One Grand Prix is set to take place in Baku 2016. How will hosting international events like these help to promote Azerbaijan as a tourism destination?

First of all, I would like to highlight the role of mega events in the promotion of tourism destinations. Azerbaijan has hosted a number of international events such as Eurovision 2012, U17 Women Football World Cup, The Crans Montana forum, the European Games in 2015, and many others that could serve as an example of the maturity of our hospitality industry and its capability to host large-scale international events. According to the feedback from the organizers of all previous events, they reported that the events were all organized and implemented successfully. There were many positive opinions about the event-hosting standards in Azerbaijan. Events such as these are considered long-term investments into crafting the country’s image as an emerging tourist destination that is capable of catering to different tastes and expectations. We also expect these events to attract tourists from all over the world. We are hosting many events in the near future, including the Formula One Grand Prix 2016, Islamic Solidarity Games in 2017, matches of Euro 2020, and many other sport and cultural events. Today, we can proudly claim that, thanks to the events mentioned above as well as other events such as the Baku International Humanitarian Forum, World Forum on Intercultural Dialogue, and many other international events, Azerbaijan has earned a positive international reputation and successfully promoted its image around the world.

How does the lowering of travel-related prices and the construction of new inexpensive hotels fit your vision for the future of the tourism sector?

It is clear that lower prices will contribute to an increase in the number of tourists coming to Azerbaijan from all around the world. At the end of 2015, the Central Bank of Azerbaijan introduced the floating exchange rate that immediately devaluated the manat to the US dollar by 47.63%. We believe the devaluation of the manat will undoubtedly affect incoming tourists and further develop tourism in the country, as the prices in foreign currencies will be lower. In addition to the world famous luxury hotels such as Four Seasons Hotel Baku, Hyatt Regency, JW Marriott Absheron Baku Hotel, Jumeirah Bilgah Beach Hotel, Fairmont, Hilton Baku, and Kempinski Hotel Badamdar, there is now a strong and increasing demand for middle class and budget hotels in Baku and the regions of Azerbaijan. As the Ministry of Culture and Tourism of the Republic of Azerbaijan, we do our best to analyze the market, perform the research, and inform all stakeholders about new trends.

What can you tell us about current visa procedures and connectivity in Azerbaijan?

In past years, visa and connectivity issues were the main challenges to overcome for the thorough development of the tourism industry in Azerbaijan. In early 2013, Azerbaijan began a new practice of issuing electronic visas, which became useful for attracting more tourists to our country. Access to this system was granted to the majority of tour-operators and requires only a passport photocopy and an individual photo from the tourist. The visa fee is $20 and it is delivered in five working days. This visa opens a new page in the development of incoming tourism and facilitates the accessibility of travel to the country. Apart from that, starting from February 1, 2016, citizens of Bahrain, China, Kuwait, Israel, Japan, Malaysia, Oman, Qatar, Saudi Arabia, Singapore, South Korea, Turkey, and the UAE have the opportunity to obtain visas upon arrival at international airports in Azerbaijan. Regarding connectivity, every year we see the opening of new direct flights from Baku, as well as from the regions of Azerbaijan, to different destinations. Azerbaijan Airlines, the national airline of the country, makes flights to more than 20 countries, which include flights to Paris, Dubai, Milan, New York, Beijing, Prague, Tel Aviv, Tehran, Kiev, and many other cities of the world. Our Ministry is in permanent contact with Azerbaijan Airlines on exploring new opportunities for development and cooperation. In order to coordinate marketing activities, our Ministry and AZAL decided to establish a joint Working Group. Currently, there are also flights to and from Azerbaijan by Turkish Airlines, Aeroflot, and several other airlines from Russia, Lufthansa, British Airways, Qatar Airways, China Southern Airlines, and many others.

When compared to numbers from the previous year, the hospitality and catering sector proved to be the most dynamic sector of Azerbaijan in 2015. To what can you attribute this impressive rate of growth?

Today, we can proudly say that the number of foreign tourists traveling to Azerbaijan has reached more than 2 million, with their expenditure around $1 billion per year. The direct share of tourism in country’s GDP is 4.1%, and the number of employees in the industry reached 42,000 people. Tourism is one of three non-petroleum economic sectors identified as a priority for the national economic development plans in Azerbaijan. The year of 2011 was proclaimed the Year of Tourism. The industry got strong support from state leadership and personally from HE President Ilham Aliyev as a result. This high level of commitment contributes significantly to the development of tourism and the associated infrastructure, elaboration of new policies and standards, international cooperation programs, development of dialogue between the public and private sector, and the attraction of domestic and international investments. The role of tourism in economic development is indisputable. Understanding the importance of the tourism sector, the government in Azerbaijan aims to achieve further diversification of the economy, balanced and sustainable socio-economic development in the regions, and to reduce unemployment and poverty through the tourism industry. Azerbaijan has all the necessary elements for a tourist destination: hospitality, rich historic and cultural heritage, beautiful natural landscapes, delicious cuisine, and a very favorable geographical location. These unique characteristics make us an all-year round destination and we now have almost all types of tourism activities in our country. We do believe that the tourism sector in Azerbaijan will continue its development in coming years.

How does the Ministry work to promote Azerbaijan as a country of remarkable culture?

The rich historical and cultural heritage of the country attracts visitors from all over the world. Despite of the size of country, the culture and heritage of Azerbaijan is very diverse and colorful. I would like to emphasize that cultural tourism is one of our main tourism products. I believe that increasing international awareness of Azerbaijan owes a lot to its well-maintained culture, traditions, and arts. Today, the culture of Azerbaijan is well recognized at the international level, with masterpieces and cultural and historical monuments included into UNESCO’s lists of World Heritage and Intangible Cultural Heritage. Azerbaijani carpets, mugam, ashugs, the Novruz festival and many other cultural elements received well-deserved recognition and attention as part of many international cultural events worldwide. The Ministry, in the framework of participating in major trade fairs and advertising Azerbaijan via world mass media on CNN, Euronews, and many other international channels, is using the culture of Azerbaijan and cultural tourism in the country as one of its main promotion tools. Among the most important elements of this cultural development and expansion of international links is the special role of the UNWTO Silk Road Program, a significant factor in the development of international cooperation in many fields of economy, transportation, trade, cultural exchange, and tourism. The World Forum on Intercultural Dialogue is also regularly organized in Baku on a biannual basis. There is a special platform dedicated to tourism at this Forum where the main topic was the effect of tourism on the dialogue between cultures and societies. Apart from that, Azerbaijan will host the 7th Global Forum of the United Nations Alliance of Civilizations in April 2016. This Global Forum will become another historic event to ensure peace, understanding, harmony, and dialogue between cultures and civilizations in the modern world.

With a new Parliament elected in November of 2015, what are the Ministry’s priorities for 2016?

As the tourism industry develops, it needs more advanced legal tools to cover the needs of all involved parties and business processes. With kind assistance offered by UNWTO and other international experts, we have developed the Draft Law on Tourism, which is supposed to replace the current Law on Tourism adopted in 1999. This new document is supposed to cover the needs of the industry not only for today, but also for at least the next 10 years, foreseeing its development path and resolving current and future challenges.