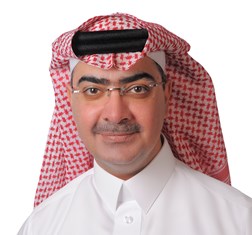 Abdulaziz Alshamsi was appointed CEO of Tabadul in 2017 and has led the efforts to transform the organization into an innovation hub focused on facilitating trade and streamlining electronic transactions. He has 20 years of experience in the IT and communications industry in both the public and private domain, and often in executive capacities. Before Tabadul, he was the operations director at Elm Company and the IT operation and communications director at the Ministry of Foreign Affairs. Furthermore, he worked with STC, GO Telecom, Lucent Technologies, and the Saudi regulator, CITC. He is a graduate of KFUPM and has completed a number of executive programs at Oxford, Stanford University, IMD, and Harvard Law School.

Share on:
A series of widespread reforms have boosted transparency and saved a great deal of time and money for those in the import/export business, adding value to a supply-chain that grows more efficient by the month.

Could you tell us more about the recent launch of Fasah, the platform to improve cross-border trade with a single window?

One of Vision 2030’s main visions is maximizing the value of Saudi Arabia’s great location between three continents by creating a unique logistic platform serving the logistic movement between Europe, Africa, and Asia, which means that facilitating trade across the border is a top priority. Our previous portal, SaudiEDI, had been in place since 2004, though it was only focused on customs services. Traders still needed to follow manual paper submission processes and go to multiple government agencies to receive clearance. The Kingdom recognized that it was necessary to have a single national export/import platform serving the traders via a single window, without the need of manual or redundant document submittal to the different government agencies, in a way that provides full cost transparency and tracking visibility. This is what we started working on in 2017, based on the direction set by Saudi Customs and Saudi Ports Authority. We are building a single window electronic platform that aims to have full interaction with all related government agencies. We are just starting, and what we have launched so far is the first step. We will rollout the integration with SFDA and MEWA in four of Saudi’s major ports, which represent more than 60% of the country’s total import volumes. We already covered the integration with railway operator, air cargo, and express mail companies. We then launched a national import-export platform named Fasah in May 2018, which we plan to integrate with around 27 government agencies. We have support via royal decree to expedite the integration process, which will help fully transforming the clearing of imported and exported shipments. Now we have a custom community system and a port community system that are integrated. By integrating these systems with other government agencies, we are working toward creating a single, fully integrated platform.

How does this new system work within the 24-hour customs clearance initiative?

The 24-hour initiative is the result of combined effort. One of these was the alignment and cooperation between the Saudi customs and ports authorities on the business process re-engineering. We were part of the IT enablement of the new process. Saudi Customs’ acceptance of traders’ electronic filing submittal was a major part of the success of this initiative. Previously, shipments required that traders manually submit documentation at the customs office. This process was extremely time consuming and inefficient. Now, the Saudi Customs and Ports accept electronic copies of documents, which makes doing business much easier, greatly improves transparency, and maximizes the time of those looking to import or export goods, which is a major piece of the puzzle. Another piece is the port operator, which is responsible for organizing container movement. We created a service that allows us to have full visibility of containers’ location, scheduling, and tracking within the port, which creates vast efficiencies and maximizes transparency. The last piece of the puzzle revolves around changing the businesses processes of the Saudi Ports and Customs.

How do you intend to further streamline the ecosystem for imports and exports?

Within ports, we have helped to optimize document submission and container movement. In August 2018, we launched electronic payments, which removed the need for cash in settling invoice payments at the port. We strive to provide our clients with full transparency, which includes providing e-invoices that have a full breakdown of charges. Traders currently have no transparency on their bills, since they are handled by customs brokers, which makes them vulnerable. This electronic payment service will change that. As part of our efforts to fully optimize port activities, we are now working with the Port Authority on the truck scheduling to the ports and getting rid of unnecessary congestion. Our current pilot service in Jeddah Islamic Seaport and King Abdulaziz has greatly improved truck movements in and out of the port.