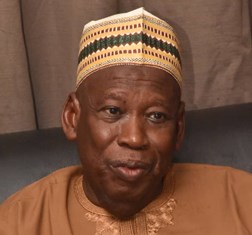 Abdullahi Umar Ganduje’s passion to serve his people was the driver behind his decision to join politics. Between 1984 and 1994, Ganduje held various positions government positions in the Federal Capital Development Authority (F.C.D.A) Abuja, and in 1994 he became the Honorable Commissioner of Ministry of Works, Housing and Transport, Kano. In 1999 he was appointed Deputy Governor of Kano State under Governor Rabiu Kwankwaso, a position he held until 2003. Between 2005 and 2006 he was Special Adviser on Policy to the Hon. Minister of Defence. From 2009 to 2011 he was Executive Secretary at Lake Chad Basin Commission in the Republic of Chad. In 2011 he once again was appointed Deputy Governor of Kano State under Kwankwaso, before becoming Executive Governor himself in 2015. Ganduje holds a PhD in Public Administration from the University of Ibadan, a Master of Public Administration (MPA) from Institute of Administration, Ahmadu Bello University Zaria, a Master of Education (M.ed) in Psychology from Bayero University Kano, and a BS in Education again from Ahmadu Bello University Zaria.

Share on:
“In Kano state we have zero tolerance for corruption.“

What have been some of the measures implemented by the government of Kano to improve the economy since you entered office?

It has been a difficult time for Nigeria due to the low oil prices, and the President was determined to foster agriculture production to reduce food imports. We needed to develop our internal revenue in order to develop our economy, and we had to reform the system by revamping the board of internal revenue, which used to be handled by government officials. That was not efficient enough and suffered from corruption. We created a board for collections that employed young, educated, well-motivated graduates, and we made it independent. We also established an independent tax collection body to expand taxes. As for agriculture, we held various meetings with farmers associations to identify farmers’ main issues. For decades, agriculture was vital to the country’s development; however, with the discovery of oil, people abandoned their farms to earn easy money from oil. In order to entice them back to farming, we want to create the right environment. Most farmers were not producing at a profitable rate, which discouraged them. They imported rice, wheat, and tomato paste, for example, at lower prices than what it took to produce. The federal government had to ban the imports of certain foods to protect them. We provided NGN100 million (USD275,000) for the purchase of improved seeds, which has increased participation. Another issue was with fertilizers, which was imported because of subsidies. It was scarce and, therefore, expensive. We provided new machinery to a local fertilizer company, serviced its old ones, and built up new management. Now, we are home to the largest fertilizer producer in northern Nigeria.

Why are sectors such as manufacturing, power, and infrastructure also attractive for the development of Kano state?

In manufacturing, due to increased farmers’ production and pro-agriculture government policies, we are seeking investors. In particular, we have encouraged the production of tomato, and there is now a need for companies that can process it into tomato paste and puree. For those who produce rice, we need more rice millers who can process it into the end product for consumption. Pertaining to solar energy, the federal government has liberalized electricity generation, and we invite companies to play in this sphere. To attract them, we offer free land to any company that wants to produce solar energy. The government will also pay compensation on the land and provide a certificate of occupancy for the land. However, we have to prove, beyond any reasonable doubt, that the investor is serious. Aliko Dangote is now investing in solar energy through our program, as well as one Chinese company. Another important issue when it comes to attracting foreign investors is security. In Kano state, before the advent of this administration, we had problems pertaining to Boko Haram. Now, with the current President limiting insurgent activities, we only see Boko Haram in a few parts of the country. Kano has benefited immensely from government efforts in containing the effects of Boko Haram. For the last few years, we have witnessed an increase in investor activity. We aim to ensure peace and stability; indeed, it is now a different story for anyone working in Kano state.

As Kano approaches “megacity” status, how will it overcome the associated socio-economic challenges?

A megacity is not only a city with a growing population, but also a city where infrastructure is working and the economy is healthy. In order to make it a true megacity, we have to look into the transportation system and road network. We have identified some areas that see a great deal of traffic jams. First, we have reviewed the master plan of the city; it was last reviewed 50 years ago. We have entered into an agreement with a consulting firm to review the master plan that will hopefully generate a better plan for a well-articulated road network, drainage network, and the type of infrastructure we need to provide. We are now developing flyovers and underpasses. Another problem that a megacity faces is unemployment. Due to a lack of electricity and sometimes the smuggling of cheap imports, many of our companies have shut down. The federal government is taking care of that, and we are also working together to improve systems; however, the problem of youth unemployment remains a severe issue. We have undertaken the collection of data on the number of unemployed and the type of unemployment in the city. In the short term, we provide skills to the youth through institutions. We also offer empowerment through different equipment. We have identified 24 different types of trades where youth can gain automatic employment if they are able to get the correct skills. Correspondingly, we are building a modern skills acquisition center in Kano for which construction is about 90% completed. Also in the short term, we have entered an agreement with Peugeot Nigeria. We lack well-trained auto mechanics, and we offer scholarships to 75 young people for one year. We also enrolled 100 girls and 50 boys to become automotive engineers. All 150 graduated without a single drop out. Peugeot will construct new garages with the latest equipment and technology in Kano, and our students will be qualified to work in those areas. We have even registered people who live on the street and are working on ways to assist them.

What message would you send to the local and international investor community about doing business in Kano state?

In Kano state we have zero tolerance for corruption. Many investors hesitate to invest in Nigeria because of the perception of widespread corruption. In order to enforce that policy, we created an anti-corruption body that is independent. It has a working relationship with the Economic and Financial Crimes Commission (EFCC), and we have trained some of the staff. We are building anti-corruption offices across 44 parts of the state. We want to assure investors that action will be taken in cases of corruption. We also make business transactions easy; we have reformed the system for those who require land or documents and have reduced the amount of time it takes. We have also succeeded in reducing the time it takes to get approvals. We have implemented business-friendly measures and are now among the top in the country for ease of doing business. You can invest in Kano safely and reliably, and doing business here is doing business all over West Africa.