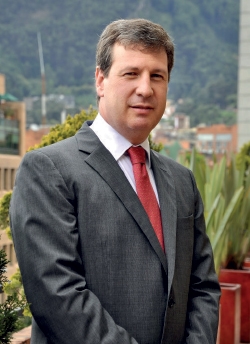 Juan Carlos Archila Cabal obtained a Master’s degree in International Business Studies from the University of South Carolina in 1994. He went on to become the Director and General Manager of Motorola de Mexico in 2002. In 2004, he was appointed Vice-President of the same company. In March 2007, he assumed the position of President of Brightstar Corporation Latin America in Mexico. Archila has been President of Claro for América Móvil in Colombia since 2009.

Share on:
What have been Claro’s milestones over the 2012-2013 period? We have been working toward the integration of systems and networks, both fixed and mobile, in order to be able to […]

We have been working toward the integration of systems and networks, both fixed and mobile, in order to be able to move forward into convergence services. This requires some time, but we will soon see that come to fruition. The other milestone for us is 4G. After much discussion regarding Claro’s participation in the 4G auction, the issue was resolved and we became one of the main players in the ICT arena, offering 4G services to our customers. These are the two emblematic elements in terms of innovation within the ICT industry at the present time.

What is unique about Colombian customers?

Colombia in general has been slow in implementing new technologies, but once it starts, it happens very quickly. With the mobile market, innovation started in 1994, five or six years later than the average Latin American country, but it still reached 100% penetration very quickly, probably faster than other markets in the region. Another good example is represented by computer usage; many companies are looking at Colombia as a growing market at this point in time because it is taking off really fast, and this is not confined to computers alone, but essentially applies to any other service. In addition, I consider Colombian consumers to be highly price sensitive. For example, mobile rates are probably the lowest in the region and perhaps the world. The average price per minute rate in Colombia is about $0.06, while Claro’s is probably about $0.045. Colombians talk a lot, almost twice as much as other Latin Americans. They talk about 210 minutes a month, while an Argentinian speaks closer to 130 minutes per month.

Can you talk about Claro’s Wi-Fi hotspots?

We are expanding our Wi-Fi coverage with the idea of being able to complement the two networks, to funnel traffic from the wireless side into the wired side, and to use that capacity throughout the country. Given the restrictions we have on the deployment of infrastructure, this task is something that is not under our control in terms of managing traffic from the two networks.

Which areas of the IT sector have more potential for growth?

Broadband, as well as data services, remain our growth drivers. Today, for example, we have 250 municipalities covered by cable. About 80% of that is already bi-directional, which allows you to provide not only TV, but also all other services as well. It is clear that huge investments will be necessary, provided that we can resolve the instability that we are seeing today. I believe the cloud will be the engine because I think companies will very quickly start offloading all the things that actually bring down companies—things that are outside of their core business.

What is your outlook for the ICT sector in Colombia for 2014, and for the role of Claro in it?

For the ICT sector, it is clearly a year for investment and 4G will be the key driver of that with many companies testing different business models. In keeping with our present business model of offering mobility to Colombians, Claro’s future plans will be no different from the past. We are reinvesting about 70% of our profits year after year and Claro is a large corporation compared to the size of the country, so the amount of investment is remarkable. The other area of focus will be the customer service area, which we are working to improve. We want to make sure people get the answers and have the services they need. This is a challenge, but we are investing in many new points of sale, customer service centers, and call centers, as well as in diverse channels to become better on that front.