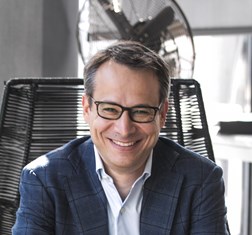 Adrián Neuhauser has more than 20 years of experience in the financial sector with a focus on investment banking as well as extensive experience working with transportation companies, including airlines, railroad, and trucking companies. He was managing director at Credit Suisse covering airlines throughout the Americas in the last three years. Previously, he held senior positions at Deutsche Bank, Bank of America, as well as Merrill Lynch, where he was responsible for M&A and capital markets transaction in Chile and the Andean region. Neuhauser holds an engineering degree from Pontificia Católica de Chile University in Chile.

Share on:
With air travel gradually recovering, Avianca continues to demonstrate the values of resilience that have characterized the brand throughout its history.

Avianca is the world’s oldest continuously operating airline. What is the significance of your 101-year-old brand, and what does it mean in terms of resilience, adaptation, and overcoming difficulties?

It is definitely an honor to lead the world’s second-oldest airline, the world’s longest continuously operating airline, and a company that is critical to Colombia not just because it is a symbol of the country to the world but because it is a natural part of the local economy. Ultimately, there is a reason that Colombia has had an airline for as long as it has. Part of it is due to the company’s ability to adapt, innovate, and address the underlining needs of the market. Part of it is due to Colombia’s geography; it is an extremely decentralized country, and connectivity on the ground is complicated. Therefore, air connectivity is paramount. When we combine the fact that there are numerous big cities with an integrated economy, a large number of people who need to travel from one place to another, and that geographically air travel is the best way to do it, Colombia is the perfect market for airlines to serve. Avianca has proven capable of adapting over time to continue to evolve and adjust its service to the realities of the market and the needs of its customers over time. It is an honor to be doing this, and we expect to continue to evolve and be the leading airline in Colombia at least for another 100 years moving forward.

How is Avianca planning to maintain its competitive edge and market leadership?

The fact that we connect more cities and we connect them often is a critical part of what makes us different. It is a critical part of why we want customers to choose to fly with us consistently and make us their preferred brand. We reinforced that with LifeMiles, the leading loyalty program in the region. We have announced over 50 routes in the short term, and they are a combination of domestic routes as well as many international routes that we are adding, particularly international routes out of cities other than just Bogotá. We are increasingly focused on connecting the rest of Colombia to the world directly. As we restart our network from Colombia between June and July, we will restart links to Fort Lauderdale, Washington DC, Los Angeles, San Juan, Panama City, La Paz, and Santa Cruz de la Sierra. There is more to come; we are adding additional capacity in existing international routes as well. The sharp recovery in international travel, particularly in May and June 2021, is also driving us to serve our customers by adding additional capacity in existing routes such as Miami and New York. We are accordingly expanding capacity there as quickly as we can.

How is Avianca important to the Colombian economy, and what role does it play in helping the country recover after the pandemic slump?

We are an extremely significant direct employer, with about 14,000 employees currently. The indirect employment that we drive is three to 10 times more, depending on how one measures it. We are the largest cargo carrier in the country, with over 50% market share. We are also the largest passenger carrier in the country, with over 50% market share and not just domestically connecting a country whose economy is heavily dependent on air but also connecting Avianca to the world and driving international tourism, which is a major part of the country’s economic plans. There are few countries where air travel is as critical as it is in Colombia. This is something that we owe the country to ensure that economic activity continues to grow, Colombia continues to be accessible, and that air travel continues to be fairly priced. People need to know they can depend on solid, consistent service and can travel from one point to another whenever they need. Avianca is there for them.