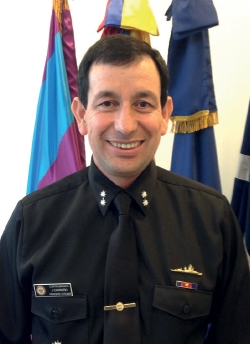 Rear Admiral Jorge Enrique Carreño Moreno is an officer in the Colombian Navy; he graduated from the Colombian Naval Academy as Ensign in 1984. As a Naval Engineer, he served aboard several warships during his first years of duty in the Navy. He holds a Master’s degree in Security and Defense from the Escuela Superior de Guerra, Colombia; and a PhD in Naval Architecture from Universidad Politécnica de Madrid, Spain. His research interests are in the fields of ship dynamics, manoeuvrability in shallow waters and experimental hydrodynamics. He is a former Director of the Colombian Naval Academy “Almirante Padilla.” Since 1998, he has been working in the shipbuilding industry, mainly focused in ship design and shipbuilding projects. Currently, he is the President of The Science and Technology Corporation for the Development of the Shipbuilding Industry in Colombia — COTECMAR.

Share on:
How committed is the Colombian business sector to the peace and reintegration processes? Expectations are high for a lasting peace agreement for the whole country. In this context, the defense […]

How committed is the Colombian business sector to the peace and reintegration processes?

Expectations are high for a lasting peace agreement for the whole country. In this context, the defense industry is highly committed to the peace process and the transition period that will follow it. Such a commitment is palpable not only in the main urban areas of the country, but also in rural Colombia. We are all focused on one common goal; to build a peaceful society in Colombia.

How did the launch of the ARC Golfo de Tribugá, COTECMAR’s first amphibious landing ship, contribute to the country’s security?

This kind of ship is the culmination of a learning process that began over 15 years ago to strengthen the defense of the country. Over the past 10 years, we have been producing different types of maritime and riverine equipment that have taken advantage of, and improved, our level of technology and know-how. This Colombian Navy ship has unique technology and is envisaged to provide support in security and defense activities, as well as humanitarian aid and cargo transportation.

How would you assess the first stage of the implementation of COTECMAR’s methodology and strategy regarding offshore protection?

The first stage of our strategy ended in 2014 and the goals achieved are important; we have provided the support and solutions to all operational activities of the Colombian Navy. For example, we have modernized all warships and boosted their capacities. We have also become an exporter of maritime technology and equipment to other armed forces, in particular to Brazil. We have talked about the Amazon Patrol Ship project to develop vessels to protect the common Amazon rainforest area. The goal is to develop the design of this Patrol Ship in 2014. As for future prospects, we will change our plans to correspond with the new Presidential Cycle starting in August 2014. However, we can presume that the main strategy will target a further level of connectivity within the country through its rivers.

What are the main guidelines of The Colombian Navy Development Plan for 2030 and what is COTECMAR’s role in this?

In our country’s current situation we envisage the incorporation of new capacities in terms of vessels for the Coast Guard, for example Offshore Patrol Vessels (OPV) and Coastal Patrol Vessels (CPV), and also the well known Riverine Support Patrol Vessels (RSPV) and High-Speed Patrol Boats (LPR) for the Colombian Marine Corps. COTECMAR will provide its integrated solutions to complete these projects. We are also focusing on the replacement of Colombia’s current frigate fleet with local technology developed by COTECMAR.

What role does the relationship between universities and COTECMAR play in your overall R&D strategy?

The ARC “Golfo de Tribugá” vessel is the perfect example of collaboration between the higher education sector and ourselves; it was the result of the thesis project of two naval engineering students in a leading maritime academy in Colombia, Escuela Naval de Cadetes Almirante Padilla. This is just an example, because we also collaborate closely with Colciencias and other centers of higher education. There are three universities behind the establishment of COTECMAR; Universidad Nacional de Colombia and two private ones: the Universidad del Norte (Barranquilla) and Universidad Tecnológica de Bolivar (Cartagena).

What is the current size of COTECMAR?

The past few years have been active as we introduced innovation of the highest standards to the Colombian Navy, which has been part of the government’s main strategy. Between 2008 and 2013, we carried out the Orion Plan, which enabled us to double the size of our operations; last year we had more than 1,250 direct employees. Other sectors have also benefited from our increased activity, because the vessels we produce are like small cities and we require many different providers. COTECMAR’s turnover in 2013 reached Ps200 trillion. Right now, we are undergoing a transition process, and while we wait for the government’s new four-year development plan, we are also looking to open new markets.