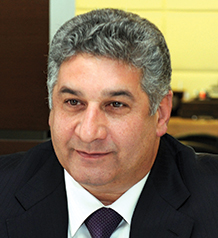 Ahead of the Game

Born in Baku in 1964, HE Azad Rahimov studied at the Azerbaijan Languages University, and began his career as Head of Department of the Khatai district Committee of Youth Union (Komsomol) of Azerbaijan. Two years later, he was named head of the entire organization, and in 1990 became Head of the Youth Organizations Committee of Azerbaijan, a position he occupied until 1993. From 1994 until 2006, he worked in the private sector, firstly spending four years as General Director of the Ros-Imesko, followed by eight years as General Director of the Italdizayn Company. He served as President of the Azerbaijan Dance Sport Federation between 2005 and 2006, and was named as Minister of Youth and Sports of the Republic of Azerbaijan in February of that year. In addition, 2006 saw the Minister named as Vice-President of the National Olympic Committee of Azerbaijan. Since December 2012, he has served as CEO of the Baku 2015 Operations Committee.

Share on:
TBY talks to HE Azad Rahimov, Minister of Youth and Sports & the CEO of the Baku 2015 European Games Operations Committee, on hosting the historic inaugural European Games and the legacy such an event will leave on the country.

The first European Games will be held in 2015 and is a historic landmark in many ways. How significant are the Games in promoting Azerbaijan as a reputable international venue?

This year will be a historic one for Azerbaijan, as well as for European sport. The inaugural European Games were awarded to Azerbaijan in December 2012 based on the European Olympic Committees’ confidence in our ability to stage a Games worthy of the continent. The vote on that occasion was overwhelmingly in favor of the Baku 2015 bid, and we intend to repay that trust with a truly memorable event. The Games are part of President Ilham Aliyev’s vision to cement our country’s position as a dynamic, hospitable, culture and business center in Europe. Azerbaijan is already known as a key provider of energy for the continent, but thanks to events such as the 2012 Eurovision Song Contest, the FIFA Women’s U-17 World Championship, the Baku 2015 European Games, and, in the coming years, the 2016 European Formula One Grand Prix, the Baku 2017 Islamic Solidarity Games, and UEFA Euro 2020 football matches, our profile will be higher than ever.

Azerbaijan’s sporting prowess has increased considerably with improved efforts at the last Olympic Games in London 2012. What opportunities do the Baku Games present to enhance the performance of Azerbaijani athletes?

Azerbaijan is a country with a strong sporting tradition. Although we are not large in terms of population, we are increasingly punching above our weight. We have high hopes for our athletes’ chances at Baku 2015. Recent years have seen Azerbaijan make great strides, from the positive results at the London 2012 Olympic Games where our delegation finished 30th in the medal tally, to the exceptional performances by our young competitors at the Youth Olympic Games last year in China, where we finished among the top ten competing National Olympic Committees. Those results have given us a great springboard from which to achieve another impressive position in the medal table this summer. I truly believe we are entering a golden age for Azerbaijani sport.

It was announced in October 2014 that the 1,000th member of staff had been employed for the First European Games. How important have the Games been in encouraging employment?

The Baku 2015 Operations Committee now has over 1,400 employees, around 70% of whom are Azerbaijani with the remainder drawn from 43 different countries. Working to organize the European Games is a unique experience for these members of staff, who are learning valuable, often highly specialized and technical skills in an international context. This human legacy will play a key role in building on what we are achieving by staging the Games. The Games Academy and Graduate Excellence Programme incorporates 188 ambitious young people—162 from Azerbaijan and 26 from the National Olympic Committees of Europe—into the Baku 2015 team. The program, which enhances career advancement, ensures that these graduates are developing the skills and knowledge required to deliver not only the European Games, but also future sporting events in our country. Baku 2015 has also launched a volunteer program. The Flamekeepers, as the volunteers are known, will take on key roles during the Games, and will play a central role in fostering the spirit of Baku 2015. Part of their human legacy will be to encourage a national interest in volunteering, as well as participation in future major events.

SOCAR became an official partner of the Baku Games in September 2014. How has this partnership strengthened national efforts for the games?

SOCAR is part of a strong team of Official Partners that have joined Baku 2015. We see these relationships to be true partnerships rather than simply sponsorships. Hosting the first European Games is a major step in Azerbaijan’s national development, and Azerbaijani companies such as SOCAR will enjoy lasting benefits from the increasing professionalism and internationalism that the Games’ human legacy aspect will bring, as well as the ongoing transformations in Baku, which will help to make our capital a leading business center. Baku 2015’s eight Official Partners are Azerbaijan Airlines, BP, Coca-Cola, Nar Mobile, P&G, SOCAR, Tissot, and Kapital Bank. The Official Supporters are Azercosmos, NAZ, Néstle, Red Bull, Azersun Holding, Bazarstore, McDonald’s Azerbaijan, Milla, Motorola Solutions, Sitecore, Tickethour, and Unicef as the Official Children’s Rights Organization.

How well has sport developed among the younger generations in Azerbaijan, and what are the challenges in encouraging participation?

With 60% of the population under the age of 35, Azerbaijan has one of the youngest populations in Europe. As mentioned, the government has been undertaking a major program of construction of sporting facilities across the country to encourage our youth to develop interests in active pursuits. Young people are the future of any society, and our country is blessed with great potential in this regard. Sport has been identified by President HE Ilham Aliyev as a key driver of our nation’s economic and social development, and as Minister of Youth and Sports, I have the privilege of ensuring that this policy is carried out to the benefit of our young people. Generating interest and stimulating participation in sport is key in achieving our objective of a healthy, productive population. The new facilities will ensure that the option of taking part in active pursuits is there for all, and the European Games and other major events will provide the spark, which encourages our youngsters to maximize their potential. Part of our vision for engaging young Azerbaijanis to take part in sport and healthy lifestyles is to inspire them though the Games. Baku 2015 Organising Committee Chair First Lady HE Mehriban Aliyeva is leading this initiative personally, through her oversight of the artistic side of the Games, including the Opening and Closing Ceremonies, medal and uniform design, and the Baku 2015 mascots. Her creative vision and the elite-level competitions to be held during the Games will combine to make an unforgettable spectacle. Baku 2015 will be a watershed moment for sport in Azerbaijan, and the current investment in sporting facilities will ensure that our young people will benefit for generations to come.

Once the first European Games have been completed, what are the necessary steps to ensure that the Games continue to have a positive impact?

From the start, the aim of leaving a positive legacy in human and infrastructure terms has been central to Baku 2015. Our commitment has been to stage the Games, which will provide everything necessary for the athletes to shine, while ensuring that the investments made benefit Baku and Azerbaijan as a whole in the long term. An example of this is our Driver Training Programme, which will see more than 2,000 of the city’s professional drivers take a 15-day course designed to bring their skills up to international standards and ensure a safer driving environment in Baku. The city’s sporting infrastructure is being transformed, which is part of the broader nationwide campaign to invest in sporting facilities. For example, the Games will leave the city the world-class Baku Aquatics Center, a legacy item that will encourage people to take part in swimming. The large-scale events to be hosted in the coming years will provide immediate use for much of the infrastructure and human legacy of Baku 2015.