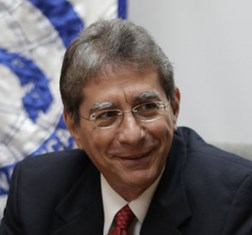 Alfredo Fonseca Mora graduated as an industrial engineer from the University of Panama. He obtained a master’s in management at Clemson University. Since the start of his career, he has worked in companies related to the production and distribution of concrete, until he established his own company in 2000 called Hormigón Express. He was President of the Iberoamerican Federation of Concrete Producers from 2007 to 2010. He obtained his private pilot’s license in 1990 from the US Federal Aviation Administration. In 2014, he was appointed General Director of the Civil Aviation Authority of Panama.

Share on:
Panama's main airport is planning a major expansion as Panama's Civil Aviation Authority opens up new air routes around the world.

What is the importance of the Civil Aviation Authority for Panama?

The Panama Canal is one of the most famous canals in the world. However, Panama has other “canals,” such as the “fire canal,” which refers to the telecommunications highway for the Americas. All the major fiber-optic cables that connect the continents with the world pass through Panama. In addition, the train that connects the Caribbean with the Pacific is an “earth canal.” I am responsible for the “air canal,” which refers to the airspace for all the aircraft that land in Panama and go on to other countries. I am also responsible for those planes that fly over our territory. The Oxford Institute indicated that 14.8% of Panama’s GDP is generated through aviation, which is equivalent to USD7.3 billion. The sector generates over 200,000 direct jobs. In comparison to the rest of the region, the aviation sector in Panama has the highest relative size to GDP. Aviation comprises 2% of GDP in Colombia and 1.4% in Brazil. It is always said that one of Panama’s most valuable resources is its location.

What influence does the authority have to help more companies enter Panama?

We are the authorizing authority for any airline carrier that arrives in Panama. We establish agreements with countries to provide air services, and Panama has an open sky policy. We are not restrictive. Recently, we signed our first agreement with an African country, Morocco. Our idea is to open an “air road” between Panama and Morocco for direct flights. Air transport companies will then request to use this road. All the companies that fly into Panama have been authorized by the authority. We recently authorized the arrival of several companies into Panama, including Lufthansa, Turkish Airlines, and Air China. These companies permit Panama to be an important point of connection. Today, from Panama one can fly to 86 different destinations in the Americas and other continents.

How will the new terminal at Tocumen boost this sector?

Our airspace is finite; it does not grow. Therefore, we are first redesigning the airspace to turn it into a more efficient one. Right now, we have 40 operations per hour in Tocumen, and that number will soon increase. Therefore, we need a third runaway before 2025. In addition, Terminal 2 adds nearly 20 gates; however, that might not be enough in the short run. We are starting to look at the possibility of a third terminal at Tocumen. The distances between the runways does not allow them to operate at the same time. The third runway, when constructed, not only will allow parallel arrivals but will also allow the airport to rebuild the actual runways, which are 80 and 40 years old.

What are you doing to reduce CO2 emissions?

We have a department dedicated to reducing CO2 emissions. Also, with the redesigning of our airspace, there will be continuous descents and continuous ascents for flights, which is the ideal scenario for CO2 reduction. In fact, we have a USD7-million bidding process ongoing to redesign our airspace.