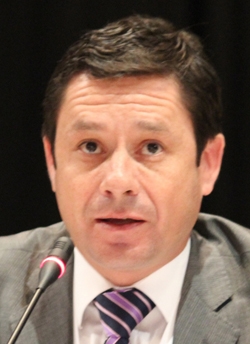 Esteban Albornoz Vintimilla was born in Cuenca in 1967, and has an undergraduate degree in electrical engineering as well as a doctorate from the University of San Juan in Argentina. He has been a professor at Universidad de Cuenca and Universidad Politécnica Salesiana and also served as manager of the Corporación Eléctrica del Ecuaodor (CELEC) and President of the Colegio de Ingenieros Eléctricos y Electrónicos del Ecuador.

Share on:
"We have achieved an increase of almost 1,100 MW in capacity over a very short period of time."

How has the Ministry of Electricity and Renewable Energy contributed to the transformation of Ecuador’s energy matrix since its founding in 2007?

Before 2007, there wasn’t a Ministry of Electricity and Renewable Energy in Ecuador to regulate this strategic sector of the economy. As a result, prior to 2007, the energy sector had experienced a number of complications, and in fact, was on the verge of collapse as a result of inadequate investment. This was exacerbated by the fact that a move toward privatizing the sector was hamstringed by legal uncertainties and internal complications. Therefore, in 2007, the Ministry was created to spearhead sector recovery and growth, which since then has been pronounced. In 2009, we saw a few problems in terms of poor supply, but those were basically related to the prior lack of investment. Starting in 2007, we set out a plan to swiftly reinvigorate the sector. The first idea was to take advantage of the country’s huge water potential, which is why we conducted studies to build hydroelectric projects. Currently, Ecuador has eight large hydroelectric projects under development. At the same time as we developed these projects, it was necessary to invest in conventional thermal power generation using national fossil fuel reserves. Previously, thermal power generation had used imported fuels. We have developed nine thermal plants, with around 600 MW of capacity, as well as four hydroelectric plants of around 460 MW of capacity, in addition to the eight under construction. Finally, we have taken the important, symbolic step of developing a wind farm with a 16.5-MW capacity. Overall, we have achieved an increase of almost 1,100 MW in capacity over a very short period of time.

What is the status of power consumption in the country’s energy strategy?

We have also been focused on improving efficiency in power consumption since 2007. The main segment of energy consumption in Ecuador is domestic; 35% of electricity consumed is residential, and this is where we have focused our attention. The first program involved the replacement of incandescent bulbs with compact florescent lamps and energy saving light bulbs. Today, incandescent light bulbs are no longer available in Ecuador as all bulbs are fluorescent. This is a high-impact project that involves a ban on the importation of incandescent lamps, which is key to managing energy consumption. We have another ambitious project geared at getting people to use electricity for cooking instead of LPG, whereby the public would be both washing and cooking using renewable, domestically generated electricity. We are also working to replace inefficient refrigerators; we plan to replace 330,000 refrigerators in Ecuador. Finally, the other major axis has been to restore and strengthen the management of electricity companies’ distribution and transmission systems. We have had problems in this area, especially relating to network losses and low revenue collection, and we’ve work hard and we can now safely say that one of the great achievements of the national government has been the reduction of loss. When the government took office, the loss of electric power was above 22%, but with the efforts we have made the loss rate is now at 12.6%, and many international eyes are looking at what we have achieved in just a short period of time. Ecuador saves $20 million per year for each percentage point of reduction, which means that the country has saved hundreds of millions of dollars in lost electricity. We have substantially improved the issue of collection as well; we formerly had a recovery rate of 93% and now are at 98% or 99%. That’s a more complex issue because the electrical distribution networks are very large and we have improved the quality of service. That is why we have worked throughout the electrical industry chain, meaning generation, distribution, and transmission, but also in energy efficiency.

“We have achieved an increase of almost 1,100 MW in capacity over a very short period of time.”