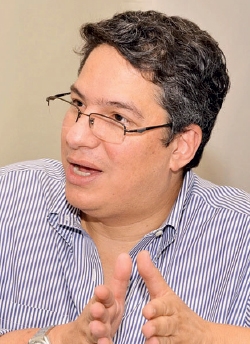 Santiago Rojas Arroyo studied law at Pontificia Universidad Javeriana, and went on to specialize in Negotiations and International Relations at the University of the Andes. In the public sector he has served as General Director of the Directorate of National Taxes and Customs (DIAN), and Deputy Minister of Foreign Trade. He was Technical Director for the Ministry of Foreign Trade and Director General of the Colombian Institute of Foreign Trade (Incomex), and has also served as Commercial Advisor for the mission of Colombia to the World Trade Organization-WTO in Geneva, Switzerland, and as a consultant outside the national government on legal issues of the FTA between Colombia and the US during the negotiation process. He is also co-author of “The Rules of the Game TLC” and other notable publications.

Share on:
What is your outlook for Colombian foreign trade for the near future, and what strategies are you implementing to strengthen the industrial network within the framework of the free trade […]

What is your outlook for Colombian foreign trade for the near future, and what strategies are you implementing to strengthen the industrial network within the framework of the free trade agreements (FTAs) Colombia has signed?

Colombia has developed into a country that generates opportunities; Colombian producers, for example, have access to over 1.4 billion consumers without tariffs and tax barriers. And this is thanks to the several FTAs we have signed over the past few years. Colombia’s economic model is a successful one, based on international integration, stability, and growth. For these and other reasons, Colombia has increased its GDP and reduced poverty levels—over the past three years, more than 2.5 million people in the country have risen out of poverty. In this context, we have expanded the Colombian middle class and considerably reduced unemployment levels nationwide. This environment has encouraged many Colombian companies and entrepreneurs to look abroad for new markets, taking advantage of the internal situation and the continued international integration of our economy. Having said that, the energy and mining sectors still account for a rather large share of the total. Therefore, the challenge is to diversify both exports and destination markets. We plan to achieve this with modern and active industrial policies based on innovative production processes and chains, and the internationalization of our companies. Additionally, we aim to increase the competitiveness of our industry through tax and regulatory frameworks for this purpose.

How is the Ministry targeting a further integration of production chains between sectors and regions of the country?

This undertaking is key to the industrial strengthening of the regions. I truly think that the establishment of sectorial clusters in the regions will bring about industrial development and the integration of production chains, as the areas around those clusters develop industrial activity geared toward them. In this context, such steps will make it easier for the Colombian industrial network to establish links with the main economic sectors, boosting the industrial development of the country without leaving behind the regions. In this context, I think the Pacific Alliance is also set to play a key role in achieving this integration of production chains not only in our country, but also in all markets within the Alliance, making us more competitive at the international level.

How was 2013 for Colombia from an industrial perspective, and what are your expectations for 2014?

In 2013, we saw an overall drop in international demand and must accept that it was not an encouraging year economically at the international level. That led to lost dynamism in our industrial sector. For this reason, the government implemented ambitious plans to reactivate certain sectors like construction and infrastructure. Moreover, the state provided favorable funding tools for the modernization of the industrial sector, and protectionist policies for Colombian producers facing unfair competition. These measures led to an increase in production based on innovation by late 2013 that continued into early 2014. We expect to continue along this line and to close the year with industrial production growth of between 3.5% and 4%.

Public policies must have a long-term vision that contributes to the transformation of the production system in Colombia. Innovation is the key word among our strategies; we allocate 10% of profits from the energy sector to boost innovation, and introduce tax concessions for those investing in R&D, among other incentives. In this context, institutions like Colciencias are set to become more relevant over the next few years. Our main goal from the government’s perspective is to transform Colombia’s production system in order to export more goods and products of higher value-added, which will eventually increase the competitive level of our companies and, by extension, our economy. This is something we have to undertake by uniting the public and private sectors with a common objective.

What role do Colciencias and iNNpulsa Colombia play in this process?

Overall, the government allocates a large part of its budget to the promotion of innovation. In this context, iNNpulsa Colombia aims to promote entrepreneurship among Colombian society, as well as strengthen regional institutionalization supports at work in this field, such as the chambers of commerce and business incubators. Meanwhile, Colciencias focuses on science and the educational development of Colombian citizens within the technological, scientific, and innovative fields. Colciencias is set to boost human capital through closer ties with the higher education network in the country.

How will hosting the international assembly of the World Tourism Organization in Medellí­n in 2015 impact the development of the tourism sector?

The tourism industry is one of the economic sectors set to gain in relevance to the national economy. In fact, our faith in this sector allows us to target the 4 million visitor per year mark. We will implement actions to create unique and differentiated tourism experiences for our visitors and position as many Colombian destinations as possible as top tourism venues in the international arena, such as the Coffee Route, the Caribbean coast, and the Amazon. Nowadays, the tourism industry generates 1.6 million jobs, and through our ambitious strategy we expect to increase this and other metrics within the sector. Colombia is a highly diversified country and has much to offer visitors, and we must now establish the conditions to make a visit thoroughly appealing, such as package offerings, flight connections, and human resources training to strengthen our position in the sector.