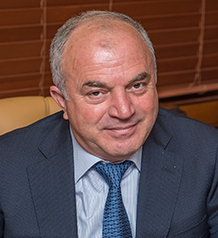 All Roads Lead to Baku

Kamil Aliyev was born in 1961 and studied at the Engineering and Construction Institute of Azerbaijan, before continuing with postgraduate studies and defending his candidate thesis on technical science in 1988. Between 1991 and 1995 he worked as director of the Scientific Research Laboratory at the “Azeravtoyol“ Production Union and later as General Director of AzVirt. He then worked as director of road construction and repair at the Head Production Office under the Engineering Communications Department of Baku City Executive Power. In 2001 he became Executive Director of AzVirt.

Share on:
TBY talks to Kamil Aliyev, Executive Director of AzVirt, on the company's major projects both at home and abroad.

What are some of the ongoing projects for AzVirt in Azerbaijan?

AzVirt is involved in the production of various construction materials. What are the different kinds of materials produced by your company, and what role does production play in your overall business strategy?

One of the fields of activity at AzVirt is the production of road construction materials. This includes different kinds of asphalt-concrete mixtures, crushed stone with various fractions, and activated mineral powder. We do not produce these materials with the intention of selling, but instead to supply our company for the projects that we carry out.

Azvirt has expanded to Romania and Serbia, and the Serbian Prime Minister paid a visit to AzVirt in 2015. What were some of the business points discussed in that meeting regarding your company’s projects in Serbia?

AzVirt is carrying out the construction of highway E763: Belgrade-Juzni Jardan, the Lijig-Prelina section in Serbia, and the reconstruction of the Bucharest ring road in Romania. In April 2015, a delegation led by the Prime Minister of the Republic of Serbia, Alexander Vucic, visited AzVirt. In the meeting, Mr. Vucic was informed about the construction activity of AzVirt in Serbia. We informed him that 20% of the employees on the Serbian project are Azerbaijanis, while the remaining 80% are local specialists. In addition, we mentioned the importance of taking operative measures designed to ensure the completion of the project on time. Mr. Vucic mentioned the government’s support for the project and suggested to establish a working group for solving any problems that may arise during the project. The Prime Minister pointed out that this project is important for his country and he hopes that it will be completed by the end of 2016. This highway in Belgrade stands on the South Adriatic, and acts as a connection point between Serbia and Montenegro. It is the shortest connection between Belgrade and its surroundings in the South. The length of the four-lane highway is 40.4km, and the plan calls for the construction of 65 bridges and four tunnels with a total length of 1.7km on the highway. The Prime Minister expressed his intent to cooperate with AzVirt in the construction of a ring road around Belgrade and roads close to the borders with Macedonia and Greece (Corridor 10). His suggestion was highly appreciated by our company, and we will hold negotiations on this topic.

How does the laboratory at AzVirt help in delivering your company’s high-quality products?

AzVirt has a wide production basis, which includes laboratories equipped with the most modern technologies from Germany, Austria, Italy, and other locations. In these labs, we can control the quality of all materials used during construction and for other tasks. The main job for our employees is to build and put into operation roads of the highest quality. Adhering to quality standards is a priority for us. While we mainly use the level of standards applicable to CIS countries, we also follow international standards

The Formula One Grand Prix is taking place in Baku this summer. How is AzVirt involved in track preparation or other works for this race?

Baku will host the Formula One Grand Prix in 2016, and the track for the race was designed by Tilke’s Architecture Bureau. The track, which has an area of 143,000sqm and a length of 6km, will consist of 20 turns—8 right and 12 left turns. The track, prepared to the specifications of the Baku Grand Prix company, has been designed for speeds up to 340km/h. AzVirt will repair two layers of the asphalt cover for the race in many different areas of Baku. Repair works are being fulfilled according to the specifications for asphalt works submitted by Tilke’s firm. In addition, a new asphalt layer has been paved with high quality control in Khagani, Bul-Bul, Pushkin, Z. Aliyev street, and half of Neftchilar Avenue. Streets are repaired in sections, taking traffic intensity into consideration. We plan to finish all repair work by May 2016.

What are your targets and expectations for 2016?

Our target for 2016 is to complete our ongoing projects on time and in a high-quality manner. We want to make a strong contribution to the development of the transport infrastructure of the country. We are also looking to extend our area of activity within the country, as well as in European and CIS countries by taking part in construction projects. For this purpose, we are looking to participate in tenders for appropriate projects in these countries.