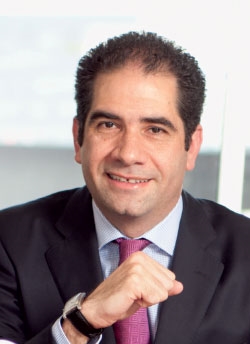 Alberto de la Fuente Piñeirua has two degrees, one in Economics and another in International Relations, both from the Instituto Tecnológico Autónomo de México (ITAM). Later, he completed a Masters of Philosophy in Economics and Social History from Oxford University in the UK and an MBA from the Australian School of Business at the University of New South Wales (UNSW). Within the Mexican public sector, Alberto worked in the Office of the Presidency, in the Ministry of Energy, and in the Energy Regulatory Commission. He joined Shell as Marketing Manager for the North West Shelf Gas Project in Perth, Australia in 2006 and, in late 2008 he moved to the Middle East, where he was appointed by Shell as Shareholder Representative and Business Advisor for Oman LNG and Qalhat LNG. He was named President of Shell in Mexico in July 2012, thereby completing a fully Mexican management team.

What is the significance of the contract that Shell has with the Federal Electricity Commission (CFE) for your operations in the country?

The contract supplies LNG into Mexico through the CFE. This contract became operational in 2006 and is part of a joint venture with Total in which Shell holds a 75% stake, with the remaining 25% belonging to Total. Shell’s aim is to expand the use of LNG in both industry and transport. Indeed, this is an area where Shell has made significant headway in the US and Canada, and I believe that as this evolves and develops in these aforementioned countries, it will also develop and expand in Mexico. There has now been an historic energy reform law put into place. However, there is still a long road ahead with definitions to be made of secondary laws, how they will be implemented, and what the country’s growth model will be. This new law could potentially open up different areas of the Mexican oil and gas industry for companies to participate in and develop the energy sector. It is still early days, but we are hopeful that companies like Shell will help contribute to the growth and development of Mexico’s energy sector.

How far will these new energy reforms impact your operations in Mexico?

I think we have to remain observant. What Mexico has achieved with these reforms is something that has not occurred in the past 75 years; however, we need to understand what the government has in mind for companies in terms of participation, and only then will the major brands and contracts follow. Then will we see the real impact of the energy reforms. Still, we are as committed as we have always been to contributing to the development of the energy sector in Mexico with our expertise, knowledge, and technology. We see ourselves as partnering with Mexico in this phase, just as we have been doing for the past 60 years.

How can Mexico take advantage of its resources and make the most of its strategic position as a supplier for the US market?

That is something we are already addressing in Mexico. We like to work with local suppliers and international companies that are based in Mexico to provide goods and services for our operations in the US and Canada, as well as all around the world. There is a very well-trained workforce here, one that is competitive and well integrated into the international arena, and Mexico is already known as an important supplier.

You are operating a refinery in the US with PEMEX. How is that operation performing?

It is a successful joint venture, which in 2013 celebrated its 20th anniversary. I congratulate those who foresaw the need for this operation 20 years ago and created the right framework in which such a project could succeed. We are looking at how we can make it last another 20 years and beyond. It is a partnership that has worked well for both PEMEX and Shell.

What future investment plans do you have in Mexico?

We expect the energy sector to implement this opening, but are waiting to see the details of the entire energy reform law, along with its implementation, to ascertain how far companies like ours can compete in Mexico not only upstream, but also throughout the full value chain. We will need to wait until later in 2014 when the secondary laws are in place, and in the meantime we will be closely monitoring the process.