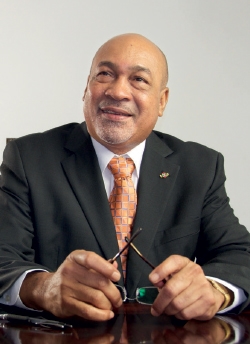 Desiré Delano Bouterse was born in 1945 and became the President of Suriname on August 13, 2010. He is the political leader of the National Democratic Party. His various successes include the transformation of the University of Suriname, the introduction of National Health and free healthcare insurance for children under 16 and people over 60, as well as various other work and social projects.

Share on:
Suriname holds the pro tempore presidency of UNASUR for the 2013-2014 period. Which of UNASUR’s objectives have you made your priorities? Having been isolated on the continent over the past […]

Suriname holds the pro tempore presidency of UNASUR for the 2013-2014 period. Which of UNASUR’s objectives have you made your priorities?

Having been isolated on the continent over the past 400 years because of our colonial history, being a member of UNASUR today means that we are working tirelessly to integrate into the South American community in all sectors, and thereby contributing to the strengthening of its unity. During our pro tempore presidency we continue to encounter challenges in the process of unification. As an organization we try to overcome these by focusing on democratic principles and a shared vision about our joined future, through dialogue. This demonstrates the level of maturity of the integration process. At every UNASUR meeting, it is noticeable how all heads of state are permeated with the significance of their mission. And I am so proud that Suriname was able to not only chair the organization, but also share some of its virtues with the rest of the continent. UNASUR is a young organization and I see a lot of similarities in the stages of development present in our own young country. At this stage it is necessary to reach higher levels of coherence, as well as greater political convergence, in order to build our path to sustainable development in harmony with the environment. Among the strategies we are implementing are a renewed vision on the use of natural resources, the strengthening of our democracies, and the establishment of South America as a nuclear weapons-free zone. Suriname offers the world a unique example of how a multicultural people can live in harmony, by unifying around common interests and adhering to tolerance toward each other’s differences.

Colombia was chosen to head the South American Defense Council (CSD) with Suriname as co-chair for one year. What is the importance of this collaboration between Colombia and Suriname?

Cooperation among UNASUR member states is further implemented through councils. For the first time in the history of the union, Suriname and Colombia hold the chairmanship of the UNASUR Defense Council simultaneously. One of the key issues that the co-chairs have focused on is the protection of natural resources. It is widely known that the South American continent harbors a vast amount of the world’s natural resources. UNASUR has a clear vision about utilizing its natural resources for the well-being and welfare of its peoples and the achievement of national development goals. The co-chairmanship of the Defense Council with Colombia has proven useful already. Through the process of consultation required on a constant basis, which results in frequent communication on a wide range of issues and the sharing of knowledge, more information about Colombia now exists. Insight into the interests and circumstances that are underlying Colombia’s policies is increasing the collaboration between the two nations in other sectors as well, such as health, energy, and finance. The cooperation between Suriname and Colombia within the Defense Council is conducted on the basis of complete parity. As co-chairs, both Ministers of Defense chair the meetings and are very much aligned. It is inspiring and revealing to observe that two countries with such disparities in their histories of national defense—and subsequently, different national security needs—have been able to apply themselves in such a way so as to support and achieve a common security policy for the region. Meetings at the technical level have been concluded, and it is expected that proposals with regard to the protection of natural resources and cyber crime will be presented at the ministerial level by the end of this year. On another note, we have registered some interesting developments in our private sector regarding Colombian investors. A Colombian cement production company has invested in a joint project in Suriname and is now producing quality cement for our booming housing sector. Also, the State Oil Company is on the brink of cooperating with Ecopetrol to explore and exploit oil, one of the main commodities of our economy.