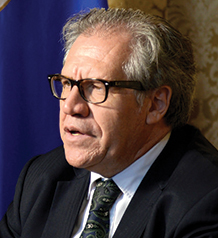 Luis Almagro was elected Secretary General of the Organization of American States on March 18, 2015. A career diplomat, Almagro was Foreign Minister of Uruguay from 2010 to March 1, 2015, and has extensive regional and international experience. In addition, he was elected Senator in the national elections in Uruguay in October 2014. In 2014, Foreign Policy magazine named him a Leading Global Thinker, one of 10 decision-makers in the region granted this international distinction.

Share on:
TBY talks to Luis Almagro, Secretary General of the OAS, about the progress made by the region in education and the importance of the Summit of the Americas.

President Nieto expressed his support for your projects on inclusive development in the region. How can Mexico contribute to greater integration of the region?

Mexico has already played a key role in advancing integration in the hemisphere, and we are sure it will continue to do so. Mexico has led many initiatives that had contributed to greater advancement of the region, mainly in the areas of strengthening security and fostering education. Mexico is supporting the OAS School of Government, which is one of our main projects to expand citizens’ access to their rights. In 2017, Mexico will host the 10th Americas Competitiveness Forum, for which the OAS serves as technical secretariat; within that framework, over the next two years, Mexico will work closely with countries in the region to foster a dialogue on public policies and the exchange of experiences on the key structural reforms needed to drive competitiveness and entrepreneurship in our hemisphere. Mexico and AMEXCID have provided more than 1,200 scholarships for graduate students from more than 25 OAS member states to earn master’s degrees and doctorates in science and engineering in Mexico over the last three years.

The OAS has promoted the creation of an Inter-American System of Education. How can this initiative complement the recent education reforms approved in Mexico?

This initiative is aimed at strengthening country’s capacity to develop policies ensuring that all children and youth of the Americas have access to high quality, inclusive, and relevant education to achieve expected learning outcomes as well as to complete the basic education cycle. The Inter-American Education System will seek to create a mechanism that showcases promising practices in the field carried-out by different institutions and organizations at a national, sub-regional, and regional level, improves their articulation, and fosters international and South-South cooperation. Considering the leadership and capacity of Mexico in the educational field, the Inter-American Education System provides an opportunity for the country to showcase its good practices, all its resources and experiences, and provide technical cooperation to other countries that are interested in adapting those good practices to their own context.

How would you evaluate the country’s progress in terms of government transparency and fighting corruption, and what are OAS’s recommendations for improvement?

Over the last 15 years, Mexico has made progress in areas such as access to public information, the establishment of a system of social comptrollership in public entities, and the adoption of ethical standards of conduct for its public servants, most of which result from its participation in the OAS Mechanism for Follow-Up on the Implementation of the Inter-American Convention against Corruption (MESICIC). Among the areas that the MESICIC has made recommendations for improvement include providing protection for those that report acts of corruption, the prevention of bribery of national and foreign public servants, and the investigation and punishment of acts of corruption.

How do the goals of the Summit of the Americas align with those of OAS, and what is your assessment of the most recent gathering?

The seventh Summit of the Americas was a watershed moment in Inter-American relations and once again provided an example of how relations among the states of the Americas are evolving. The heads of state and governments of the region held frank and open discussions about the common challenges they faced. It marked the first time that the Republic of Cuba was participating in the highest-level dialogue held in our hemisphere. That milestone unquestionably marked a new era in Inter-American relations. The OAS is now working toward the objective to have Cuba back as an active member of the organization. To that end, we have proposed a positive work agenda with Cuba that seeks to reestablish the confidence and start drawing the route for its reintegration. We will continue to strengthen frank dialogue between social actors and governments, with the aim of making this process more participatory, inclusive, and open.