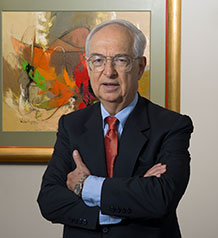 Daniel Schydlowsky was appointed Superintendent of the SBS in 2011 and is serving a five-year term. He also currently serves as President of the Association of Bank Supervisors of the Americas (ASBA) and as Deputy Chair of the Alliance for Financial Inclusion (AFI). He has occupied a number of senior public roles, and has also had a long academic career, including serving as Professor of Economics at Boston University.

Share on:
"We have increased financial inclusion by 47% over the past five years."

How has the downturn in mineral prices and the slowdown in economic growth in Peru affected the strength of the financial sector?

The financial sector remains robust and structurally sound; there is good growth, high liquidity, and ample provisioning and capital. The one place where there is a bit of a hiccup is perhaps debt and we have just a slight weakness in terms of indicators. Because of dynamic provisioning over the years, we have required banks to set aside provisions that they can now use. The quality of lending decisions, and the sophistication of operators, have also risen. Now, in some segments there has been increased competition. For instance, the municipal credit institutions segments are a very important part of our system because they are regional and Peru’s development is moving toward decentralization. One major future development is mobile banking. There are 30 million cell phones in Peru. Despite this high level of mobile penetration, only 2% of Peruvian people use mobile phones to do financial transactions. In this sense, a big commercial project called Modelo Peru is underway in order to facilitate low-cost services to the mass market in collaboration with banks, cajas, and other financial service providers. On this platform, everyone will have access to the same mobile banking system, whether Banco Credito, which is a large institution, or the smallest Caja Rural, or the Caja Municipal. This is a level playing field that we are proud of, and we are probably the first country in the world to implement it in this way in order to provide basic financial services to the majority of Peruvians. Five years from now access will have become much improved. It is hard to even imagine how the nature of transactions and probably the pricing in the market will change.

Going forward, how will you address the lack of competition in the private pension system (AFP) in light of the lack of participation at the previous tender?

We have had seen encouraging participation in the bidding itself. Prices have fallen again, which is how you actually gauge the issue; it doesn’t really matter how many participate. In this case, the goal of the reform was fulfilled in every bidding we have had. In the first bidding there was a new entrant in the market, which made a market of five pension managers. Unfortunately, one of the institutions was sold during this period (due to a global corporate decision), but fortunately that did not generate the degree of concentration it could have generated as it was split into two parts. Despite that, there is probably room for a new entrant in the subsequent rounds. Another issue concerns insurance premiums, which are not part of the same bidding process, but are a part of the cost. The competitive nature of the insurance component has gone sky high through their biddings with many companies entering the market, which is a complete success. The one area where we remain unhappy concerns the coverage of workers remaining excluded. Within two or three years there might be another occasion to see if they can be brought in someway.

Peru lags behind the regional average in insurance coverage. How will regulatory policy assist penetration?

Peru saw a new insurance contract law legislated in 2012. Before then, the insurance industry was regulated under the commercial code of 1902, whereby the law was over a century overdue for reform. When I took office and attended my first meeting of insurance regulators, I met with insurance companies that kept saying they didn’t know how to enter Peru as the legislation seemed rather unusual. That was a polite term for ‘outdated.’ Therefore, we amended it with the latest legislation. We had three to four companies entering the market over the last year. Today, the market is more competitive and offers better products, but remains in development, and will have matured within a year or two. The same is true for micro-insurance. It is all going to change if we can continue growing at 5-6%, then the insurance market will be unrecognizable five years from now. There is no question of its future growth.

What is your outlook for the devaluation of the sol and how are you ensuring that de-dollarization proceeds at a rapid rate up until that point?

The move to the Nuevo Sol will continue and will probably be promoted by those keen to borrow in Nuevos Soles. Others will hold onto dollars in terms of saving. There will probably be some adjustment of interest rates, and there might be more use of foreign markets for hedging purposes. Small fluctuations in foreign exchange are ok because they get absorbed in the natural production in the sales process. Large devaluations tend to distract people from their production and consumption decisions and push them into short-term speculative moves, which in net terms is negative for the economy. Smooth, predictable changes are preferable, and the central bank has done this very well. We have increased financial inclusion by 47% over the past five years (1.8 million people) in what has been a major effort by the industry and its regulator. We effectively determined not to impose any barrier that could curb the development of the market. We, therefore, regard ourselves rather as the guardians of fair play. There is a consumer protection agency in place in the market, but our role is to make sure the financial system is systemically fair.