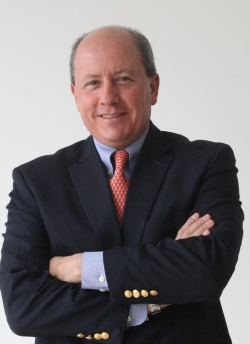 Enrique Vargas Alcázar studied mechanical engineering at the Universidad de los Andes and in Florida, US. He has 33 years in the automotive industry, and has positioned his company as one of the industry leaders in Colombia. Starting as an apprentice mechanic in 1986, he later became manager of Diesel Service Center. His background in after sales services led to his appointment as GM of Dinissan in 2009.

How do you assess the performance of the automotive sector in 2013 and what are your prospects for 2014?

The automotive sector in 2013 had a total volume of 294,000 units. During 2013, it suffered a slowdown of 5.1% compared to the previous year, even though 2013 was historically the third best year for the Colombian industry. We cannot complain about the size of the market, but for many companies, that slowdown brought some commercial stress as the expectation had been for sustained growth of the kind achieved in 2011 and 2012. There were 300,016 units sold in 2012. For 2014 we expect further growth to 305,000 units. We consider the reelection of President Santos positive because a change in government would have brought some stress to the economy.

Which models are you bringing into the Colombian market, and which are more successful?

For non-business use, commercial/passenger vehicles and SUVs are the most popular. We have the Nissan Qashqai, which is the best selling model in Europe. We also have the Nissan X-trail, which is also important for our sales figures. Currently, those two models are receiving a complete makeover. They are brand new to the market, and we rely on them in the SUV segment to boost our sales. These are our volume sectors. In addition, we have the Nissan Pathfinder, which comes from the US. Since the FTA with the US, the Pathfinder has benefited from not incurring import duties.

We are expecting to increase our sales volume by close to 12%. One reason for that is the introduction of new models, and the fact that we have a better supply now compared to 2013. We get most of our cars from Mexico, which is responsible for supplying the US and South American markets. Since the American markets have started to improve, demand has increased, whereby we have experienced difficulty sourcing our cars from Mexico in 2013. The good news is that Nissan has since opened a plant in Mexico—Aguascalientes—a technologically-advanced facility of remarkable efficiency. Another plant was opened in Brazil, which will mean that the Mexican production chains will be freer to supply other South American markets such as Colombia.

What is the importance of medium-sized cities for your Colombian operation?

Bogotá accounts for perhaps 46% of demand. Medellí­n will represent probably 13% and Cali 10%. We really need to focus our attention on smaller cities than that, to achieve a presence in 23 cities of the country. The early models that we sold in those cities in the 1960s and 1970s were 4×4 vehicles, which were ideally suited to the poor condition of the roads at the time. We managed to sell many of those units and now the brand has a good reputation. We have operations in those smaller cities and sell entry-level vehicles there, which are typically smaller sedans and pickups. The demand for 4×4 vehicles has changed more to rural transportation for farmers, with vehicles such as pick up trucks becoming more common. We sell a high volume of pickups in the smaller cities, and are the leader in the sale of pickups in the Colombian market overall.

What is your medium-term forecast for the Colombian automotive sector?

Colombia has huge potential, not only for the automobile sector, but also as a country. The Colombian consumer has gained significant purchasing capacity over time. We have developed, as an economy, strong potential for consumers yet the number of vehicles per 1,000 people is still low compared to many other countries, whereby the potential to sell more cars is high. We think that in the not too distant future, perhaps within four years, the market could grow to between 400,000 to 450,000 units per year, which would make Colombia an attractive market for the automotive business. We are confident that we can reach this level. One thing that will help increase the size of the market will be the government’s 4G projects as we will have more quality roads and cities will become better connected as a result. Nowadays traveling by road is time consuming. Sometimes it is even more efficient time-wise to fly, but once we have better roads, people will have more impetus to drive.