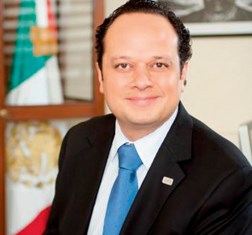 Under which financial and administrative arrangement do you operate?

We operate through a private trust built on municipal land in which tenants have either a definitive transfer lasting 99 years or a temporary one. The trust has just turned 35, meaning in 64 years when it is over, everything returns to the property of the government of Mexico City, though this will likely be adjusted when the time comes. It works through fees charged to participants, the entrance and parking toll, and the monthly rent from public toilets. We do not have public resources, but have two structures, a government one to cover the salaries of those who work here, and a private structure where everything that is collected is distributed and reinvested.

How do you measure the economic spillover that the Central de Abasto generates in the city and wider metropolitan area?

It generates an impact at the national level because it supplies 80% of what is consumed in the Mexico City metropolitan area and 35% nationally. This country has a large territory with different climates, so the products are not from a single region. The Central de Abasto is the second most-important economic unit in the country and generates USD9 billion, as well as 90,000 direct and 500,000 indirect jobs. Another important fact is that we have the highest concentration of SMEs nationwide, some 6,000; it is a cluster of entrepreneurship and an important logistics center. It is also important to highlight that in 35 years it has not closed its doors even once—not even during in the earthquakes of 1985 and 2017—which has been hugely important to protecting the nation’s food supply.

What infrastructure challenges do you face on a day-to-day basis?

There has been no need for a major structural modification; the plant essentially remains the same with the flower and vegetables market and commercial plaza, while the supply, reception, and distribution of food has maintained its structure. This plant is the only one in the world that works 24/7, 365 days a year; thus, our capacity to do maintenance work—due to this and our budget—is limited. The biggest problem we have is in the paving of the maneuver yard where the trailers arrive, which requires a USD23-million investment, not to mention all the time and logistics it would take to not stop the power station. This is why we have urged the federal government to take the issue much more seriously.

What strategy do you have to cushion the urban impact of the Central and make its logistics as fluid as possible?

Generally, the issue of traffic is complicated because 60,000 vehicles enter daily. To cushion this impact, we have an internal transportation system called Cedabús. Concerning logistics, e-commerce is something that will gradually grow and start replacing much of the wholesale visits to Central, which will have a positive impact on pollution and mobility. We have also developed sustainability strategies that are underway, such as the installation of solar panels on the roofs of warehouses. If panels for all the ceilings were developed, we would have the largest solar farm in Latin America. We also have natural gas projects, which account for almost 100% of our supply.

What has been your strategy to put the Central on the tourist map?

As the biggest wholesale market in the world, we ought to be a tourist destination. Not to mention the cultural aspect we bring through our art and murals. We also participate in various world gastronomy forums, since Mexican food is an intangible heritage of all humanity, and are closing a deal to have a tourist bus company include the Central in its tour. In 2017, we made a documentary about the Central and its murals, presented a book, and launched a new logo.