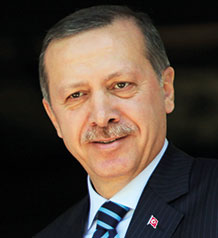 Elected the 12th President on August 10, 2014, Recep Tayyip Erdoğan is the first President of the Republic of Turkey elected by popular vote. Since taking assuming the Prime Minister’s office on March 15, 2003, he has pursued reforms to promote democratization, transparency, and the prevention of corruption. He led country in its bid to join the EU, has taken significant steps toward the resolution of the Cyprus problem, and toward the development of efficient relations with many countries through his rational foreign policy and intense visits and contacts. As the General Chairman of the AK Party, he won a great victory during the parliamentary elections held on July 22, 2007 and established the 60th government of the Republic of Turkey by winning 46.6% of the votes and received the vote of confidence. After winning 49% of the votes, he again triumphed in the parliamentary elections held in 2011 and established the 61st government.

Share on:
"Peru is a strategic hub for our economic cooperation and partnership with the region at large."

You have recently visited Peru to meet with President Humala. Which areas were identified as having the most potential for increased cooperation between the two nations?

Turkey is the 6th most popular tourism destination in the world with 36.8 million visitors and $34.3 billion in revenue as of 2014. Peru offers a wealth of unique touristic attractions. Many Turkish people have heard of and are attracted to Machu Picchu as one of the new Seven Wonders of the World. With adequate investment incentives provided by Peruvian authorities, Turkish firms could engage in tourism projects in this country and share their experience. One of the most important areas of expertise of Turkish companies is construction. There are about 250 the world-class contractors operating around the globe. 43 of these are Turkish companies. Turkey ranks second after China that has 65 international construction companies. The total value of projects completed by Turkish companies in other countries has reached $250 Billion. As we know, Peru will make huge investments in its infrastructure in the coming years. Turkish contractors could make a significant contribution in this regard as highly motivated new partners and competitors of foreign companies that have been active in Peru since long time.

Negotiations are underway to establish a multilateral Free Trade Agreement between Turkey and several countries in Central America. What is the importance of Peru’s involvement in this? €¨

Four rounds of negotiations for the Free Trade Agreement have been completed . Both sides have some priorities and concerns, but we can overcome these inherent difficulties. The leaders of both countries have expressed their intention to sign the Free Trade Agreement in June this year and the negotiating teams have been instructed to reach that objective. The negotiating teams will meet in Ankara this March with the goal to finalize the FTA. Turkey, connecting Asia and Europe both commercially and culturally, has one of the largest economies and markets in its region. As the world’s 18th and Europe’s 7th largest economy, our purchasing power parity (PPP) per capita income exceeded $19,000 in 2014. From 2002 to 2014, our per capita income has grown from $3,492 to $10,404 at constant prices. In the same period, Peru has achieved high economic growth rates, mostly over 5% per annum. It is noteworthy that Peru is on the way to become a member of OECD and a party to the Trans Pacific Agreement signed on 3 February 2016 in Auckland, New Zealand. The inward foreign direct investments (FDI) performance of Peru is also impressive. In 2013, Peru was the most attractive country for investment in Latin America according to the FDI/GDP Index. The Free Trade Agreement could serve as a lasting and appealing bridge, not only between Peru and Turkey but between the two regions as well. We do not see Peru merely as a bilateral trade partner. Peru is a strategic hub for our economic cooperation and partnership with the region at large. Our recent bilateral trade volume of $260 million does not reflect the existing potential between Turkey and Peru.

How do you envision the future of bilateral relations between the two countries? What are the Turkish government’s goals and ambitions to be achieved over the medium term?

Bilateral relations have made progress since 2010. There is still a lot of work ahead. We need to sign and ratify certain key agreements soon, most important of which is the FTA. We need to pay mutually more official visits. The role of governments is to pave the way for the people and entrepreneurs to proceed. Our goal is to increase the currently modest bilateral trade volume to $1 billion in the next five years. We would like to see Turkish contractors and investors start their projects in Peru already this year.

* This contribution was submitted by the Press Office of the President of the Republic of Turkey.