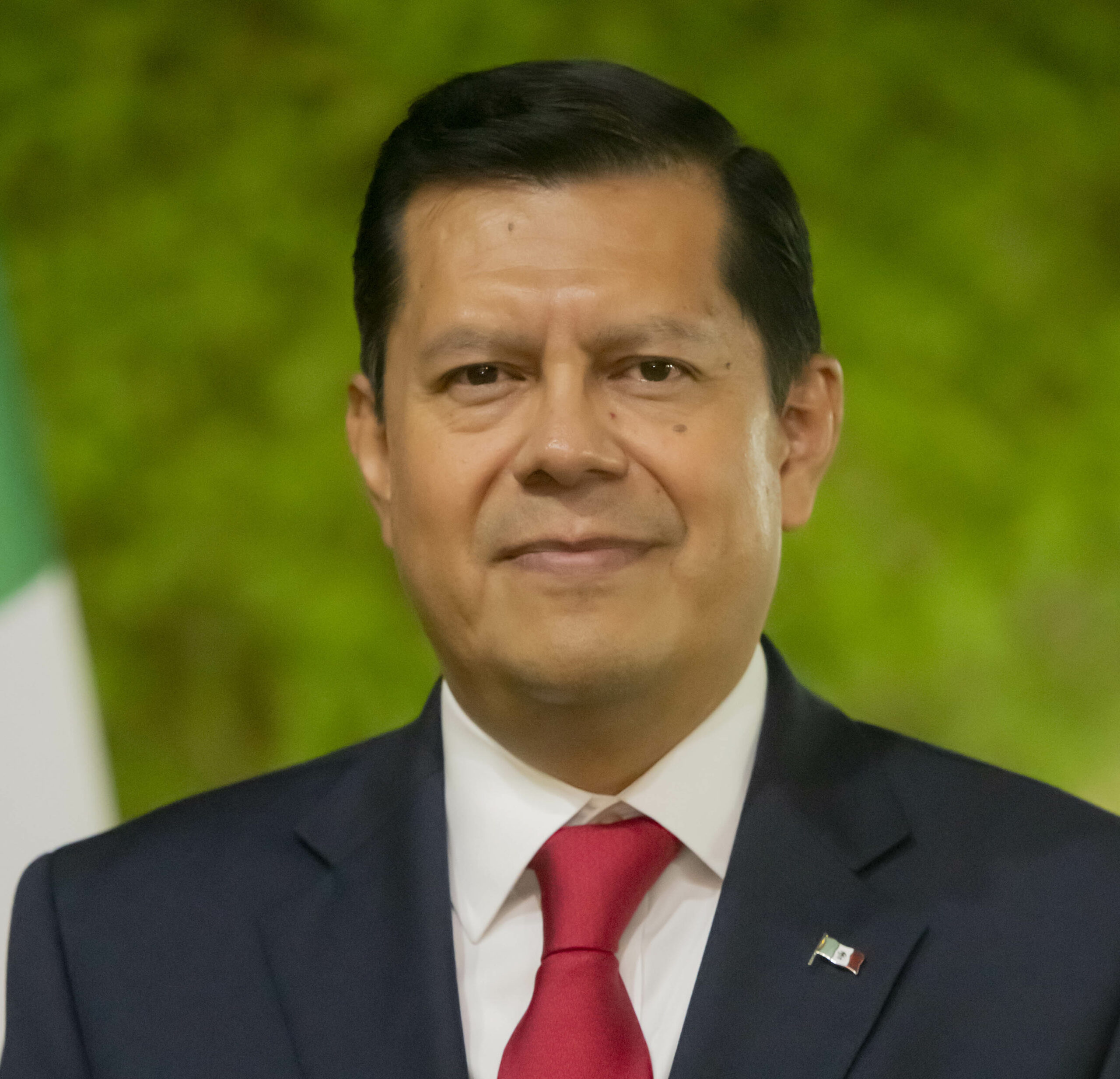 Aníbal Gómez-Toledo has been a career diplomat since 1994. On November 7, 2019, he took office as Ambassador of Mexico to the Kingdom of Saudi Arabia, Bahrain, Oman, and Yemen, based in Riyadh. Previously he served as Chargé d’Affaires at the Embassy of Mexico in the UK, where he earlier worked as Deputy Head of Mission.

Share on:
"We want to continue strengthening the political dialogue and set the ground to boost our exchanges in the economic field, including trade and investment."

Aníbal Gómez-Toledo, Mexican Ambassador to Kingdom of Saudi Arabia, Bahrain, Oman, and Yemen, talks to TBY about 70 years of bilateral ties between Mexico and Saudi Arabia.

How would you assess the evolution of the ties between the two nations, and what are the main highlights and milestones achieved during 70 years of dialogue?

Aníbal Gómez-Toledo: Today, we have a solid highway to voice our political dialogue. We are friends and strategic partners. We have a robust framework of fifteen bilateral agreements between Mexico and Saudi Arabia. Most of them were signed six years ago and among them we have memoranda of understanding for political dialogue, the tackling of international crime, the prevention of tax evasion and double taxation, as well as scientific cooperation, tourism, oil, relations between academic institutions, and labor and the economy. Most importantly, in this 70-year relationship we have had no issues, and this is significant in a relationship. On this path that we are on together, we share views, challenges and eventually differences. This is what we have built and confirms the upward importance that Mexico is giving to Saudi Arabia and vice versa.

Before the outbreak of COVID-19, bilateral trade between both nations amounted to USD352 million. What changes occurred as a result of the pandemic?

Aníbal Gómez-Toledo: Regarding bilateral trade, we had first peak in 2011 and then in 2014 when we scaled over USD1 billion, then in 2015-2016 there was a pronounced drop when the bilateral trade reached about USD200 million. However, during and after COVID-19 it has been increasing. We are now on the rise again, and we expect to continue boosting our exchanges. Something interesting that I have noticed since I arrived in Saudi Arabia is the increasing range of Mexican products that can be found in Saudi supermarkets, from avocados and berries to honey and dried chilis, among other products. Some of these products are produced in Mexico and packed in the US. Sometimes the label says made in Mexico some other says made in the U.S due to the TMEC free trade agreement. Other products arrive in Dubai and then are sent to the Kingdom. That’s why we assume they are expensive compared to products coming from other regions and countries. Within the Vision 2030 strategy, Saudi is progressively developing its local industries across numerous sectors, but it still needs to bring a wide range of products from abroad, and this is where I see a window of opportunity for Mexico if we connect and trade directly, having in mind that my country is a manufacturing super-power and a world exporting leader, therefore is great potential to boost our bilateral trade, but as I have mentioned, if we want to capitalize these opportunities we need to improve our air connectivity, and this is something both countries are already discussing as part of our renewed political dialogue, boosted by Mexican and Saudi Foreign Ministers.

In March 2022, Mexican Foreign Minister Marcelo Ebrard and his Saudi Arabian counterpart met in Riyad and agreed to strengthen bilateral economic relations. What will this specifically focus on?

Aníbal Gómez-Toledo: I want to highlight first that in July 2021 we resumed our bilateral dialogue through the Mechanism of Political Consultations we created in 2009. There had been a state visit in 2016, but I should underline that dialogue within our political mechanism had not occurred in the past 10 years—The last meeting took place in 2011. We reactivated this dialogue successfully thanks to technology, the use of which significantly accelerated in response to COVID-19. Then the Saudi Foreign Minister, His Highness Prince Faisal bin Farhan Al Saud, visited Mexico on November 29, 2021, and a follow up visit to Riyadh by the Mexican Foreign Minister, Marcelo Ebrard, took place last March 23-25 with a solid and productive agenda featuring topics such as trade, investment, tourism, and academic cooperation. During that visit, the Mexican Foreign Minister also met with the Saudi business community at the Federation of Saudi Chambers, and visited the Shura Council. More recently, last June 12-15, the Saudi Minister of Investment visited Mexico to pursue conversations that started in 2021. The bilateral relation between Mexico and Saudi Arabia has other key aspects of importance such as cooperation in education and culture. We are seeking to establish bilateral cooperation programs between Mexican and Saudi institutions of higher education, including the Mexican Diplomatic Academy. Apart from that, both countries are excited to celebrate the 70th anniversary of our bilateral relation this September 12. Also, this September Mexico will host MONDIACULT, a world summit organized by the UNESCO and the Mexican government, that will gather the Ministers of Culture of dozens of countries. The Saudi Ministry of Culture will be present. Therefore, we will continue to connect the dots.

Saudi Arabia aims to attract 100 million tourists a year by 2030, as the country focuses more on a diversified economy. As far as tourism is concerned, what lesson can the KSA learn from Mexico?

Aníbal Gómez-Toledo: The country is now undergoing a highly positive transition. We are learning a lot about what they are doing, and Mexico already has vast experience in different fields, including tourism, ranking among the top 10 countries for international visitors in 2019.  Mexico didn’t close its borders during the pandemic and because of this we were among the top three countries receiving international visitors in 2021. However, we need to return to the pre-pandemic levels. Saudi Arabia’s plan is to welcome 100 million tourists by 2030. They are doing a great job by working in the right direction, and Mexico is ready to strengthen our cooperation with our Saudi friends to achieve their goals. In addition to our experience in the tourism sector, as people we share similar characteristics within our DNA. Both Mexicans and Saudis are generous, welcoming, and friendly, which are key elements to serve better international visitors. Besides, Mexico has turned authenticity into a brand, and it has paid dividends. Here they have the potential to do the same. Image and position seem to be essential also. As far as hospitality is concerned, it is worth mentioning that a hospitality brand that was born in Tulum, Mexico, Habitas Hotel, is present now in Al Ula, Saudi Arabia. Local operators have hired Mexican staff in an effort to give a Mexican touch of authenticity in the customer service. We hope that in the months and years to come, there will be more Mexican resorts in Saudi Arabia. Within the field of entertainment, which is also important for the tourism industry, Mexico has already presence in Saudi Arabia through Cinépolis, a movie theater chain—the fourth largest in the world—that is planning to open 200 cinemas in the Kingdom. It has already started operating in the GCC, with new openings in Jeddah, Daman, and Jizan.

What are the main short-term priorities of your agenda?

Aníbal Gómez-Toledo: We want to continue strengthening the political dialogue and set the ground to boost our exchanges in the economic field, including trade and investment. We need to increase the flows of tourism between the two countries, and to achieve this goal it will be necessary to review and eventually facilitate the visa process. We would like to increase the presence of Mexico in the region, and Saudi Arabia is the place to do so. The Mexican Embassy is working in that direction, and apart from our agenda to commemorate the 70th Anniversary of the bilateral relations Mexico-Saudi Arabia and our National Day this September, I’m certain that in the coming years there will be more Mexico in the Kingdom.