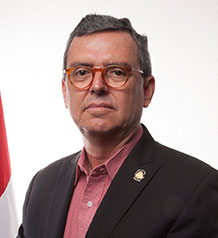 Dr. Edgar E. Gutiérrez Espeleta’s many positions have included professor at the University of Costa Rica, cofounder of the “State of the Nation” project of the National Rectors Council of Costa Rica, founder of the Observatory for Development at the University of Costa Rica in 1997, and its Director until 2005. Dr. Espeleta was the Director of the School of Statistics of the university until August 2013 and the Director of the Graduate Program in Statistics until May 7, 2014. He was also coordinator of the “Atlas de Desarrollo Humano Cantonal” project, a joint initiative with UNDP. He is currently the Minister of Environment and Energy.

Share on:
"We have addressed the problem of illegal trafficking of protected species by establishing different mechanisms to prevent and combat it."

How does the Ministry of Environment and Energy cooperate with other ministries to ensure that environmental issues are addressed?

Our President has instructed us to work together as a team. This directive is not just empty rhetoric, as it has been formalized by an executive decree whereby, among other things, the environment, energy, and land-planning sector was created, which has the Minster of Environment as a rector. Other ministers, beyond the Ministry of Environment and Energy, as well as public institutions, which have in their competences environmental topics or themes, also participate in this sector for coordination purposes. That structure makes it much easier to actually work with the other ministries, which has not always been the case. In the past, I saw that sometimes it was difficult to bring together leading organizations like the Ministry of Environment and Energy and the Ministry of Finance. Thankfully, we no longer have much trouble in coordinating activities and overcoming problems that we face. There is always a willingness to overcome difficulties, which has to do with the nature of the Governing Council. We are a group of people that has a national agenda, and don’t just think about the next election. Of course we have disagreements, but there are always ways to overcome these.

Costa Rica is known as a global leader for environmental protection and clean energy. What are the main highlights for the coming year of the National Energy Plan 2015-2030?

This plan was the first made by promoting the participation of different actors in society. We decided to establish a process that ensures the participation of different actors in order for us to get to know what they are expecting from the energy sector in the near future. The second feature is that after hearing what the participants had to say we decided to work on the main pillars that synthesize what we wanted to do during the next 15 years: energy efficiency; optimal distributed generation; a sustainable energy matrix; an environmentally friendly vehicle fleet; sustainable power development; sustainable public transport systems; and cleaner fossil fuels. For example, when we talk about diversification of the energy matrix, we do not want to put all of our eggs into just one basket. In 2015 Costa Rica’s energy was generated 75.3% by hydro, 12.8% by geothermal methods, tapping volcanoes, 10.08% by the wind, 0.77% from an alternative energy known as biomass, 0.01% from solar, and 1.04% from other fuels. We now have about a 70% participation rate of hydro generation in our matrix, and on the other hand, we know, from climate change models, that water is going to be a scare resource in the a few decades; therefore, there is a must to diversify the energy matrix in order to build the needed resilience to provide electricity for the generations to come. Hydro will of course remain the main source; however, we need to bring new sources such as solar and biomass online, as we have a lot of agricultural residue that could be used for generating electricity. The other way of reducing the electricity bill by companies is if we embrace efficiency by adopting new technology, which we are supporting in order to help the private sector become more efficient in its use of electricity. The main objective underlying the energy plan is a national development model low in emissions orientated toward the de-carbonization of our economy. The plan then complies with the Costa Rican goal of carbon neutrality for 2021.

What are the main advantages of investing in Costa Rica’s energy sector and what steps are being taken to attract FDI?

It is not easy to invest in the energy sector per se in Costa Rica. Even if foreign companies come to produce solar energy, electricity is owned by the state, which means that every kilowatt produced has to be sold to the state. The way that we have set up the market is that only 15% of the state-owned capacity we have in place to generate electricity can be placed for private generation. The market for fossil fuels is roughly the same, as there is only one state-owned company that imports all fossil fuels in Costa Rica to be distributed by private distributors. On the other hand, oil exploration in Costa Rica has been forbidden until 2021 by an executive decree signed by the President and myself, which, again, complies with our commitment in the Paris Agreement on climate change.

How is the ministry working with local authorities to combat the illegal trafficking of protected species?

We have addressed the problem of illegal trafficking of protected species by establishing different mechanisms to prevent and combat it. The most recent one is the agreement I signed with the Minister of Public Security and the President of the Supreme Court to establish a National Commission on Environmental Security with the mandate to fight criminal organizations that are trafficking wildlife species. With this we are now capable of working with international security bodies such as Interpol, which is helping to identify these groups. We have been able to capture some criminals that were trafficking rosewood, which is a precious wood that is placed in foreign markets by kilograms. It is so precious that foreign markets will pay whatever is needed to obtain just a kilogram. As you know, at the moment we are facing an important fiscal crisis, but ultimately when there are more resources available, all of these institutional arrangements will provide the required muscle for the government to combat the illegal trade of wildlife species.

What are your goals and priorities as Minister of Environment and Energy for 2017?

I would like to see more electric vehicles in our streets and a better and more environmentally friendly public transport system in place, along with much better quality fossil fuels in the market. With better fossil fuels we are going to have cars that are less pollutant and more fuel efficient, which would mean less imported fossil fuels. I would also like to see a more diverse energy matrix, including more solar and biomass and more resources employed in our protected wildlife areas.