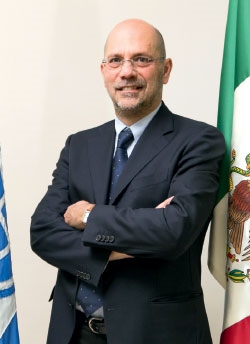 Back The Right Horse

Roberto Albisetti joined the IFC in 1998 as a senior investment officer in the petrochemical department. Today, following several foreign assignments, he is Country Manager for Mexico and Senior Manager of the IFC, with a focus on Mexico and Central America. Prior to the IFC, he was a Senior Vice President of SACE, where he was head of operations for the Italian Export Credit Agency. He had earlier been advisor to the Executive Director for Italy at the World Bank. Albisetti holds a degree in Economics and Business from the University of Genoa, and pursued graduate studies at New York University in international banking and finance. In the academic arena Roberto has been professor of finance at SDA Bocconi Milan and at the University of Genoa.

Share on:
In 2013, the IFC tripled its average annual investments in Mexico. What factors prompted this increase in project funding? Before 2013, our average for new investments was between $250 million […]

In 2013, the IFC tripled its average annual investments in Mexico. What factors prompted this increase in project funding?

Before 2013, our average for new investments was between $250 million and $300 million a year. To some extent, the year ending in June 2013 was an outlier, and the result of a business plan that we put in place in 2010. It was a strategy of repositioning in the market, aiming for higher impact, and gaining greater relevance in Mexico’s business community. Our approach was two-pronged: on the one hand, we wanted to increase the percentage of our portfolio in Mexico, because Mexico is a large country with developmental needs, a positive outlook in growth terms, and open to external investment, particularly with the reforms lining up. We also wanted to rebalance our investment portfolio, because it was relatively skewed to financial intermediaries, and we wanted to have more investments in the real sector. We started repositioning IFC in the marketplace, looking primarily to sectors of Mexico’s greatest competitiveness, and in sectors where there was more content in terms of innovation and employment potential.

Which sectors are you focusing on?

We came across a study that was done at the end of 2009 by BCG and adapted the results of the study to understand what our best options were for positioning ourselves with respect to what IFC does. We looked at the sectors with comparative competitive advantage and developmental impact. We measured the results in one case vis-í -vis domestic demand, and in the other case via the relationship of the competitiveness of these sectors globally compared to Mexico. For instance, financial services provides a combination of domestic demand and developmental impact that we are looking for as in Mexico private credit penetration is 26% of GDP, one of the lowest in Latin America. Besides financial services we defined housing, food and beverage, health services, and education as competitive sectors were the IFC can play a role. Key sectors that are driven by external markets where Mexico competes globally and have a high developmental impact on the economy, included some sectors that we don’t yet play a role, such as steel. Tourism, for example is important, but remains on the boundary. Other sectors we included were health services, business services, information technology, electronic and electric equipment, industries requiring heavy machinery, and innovative manufacturing.

Why is Mexico important to the IFC investment strategy in Latin America?

Mexico is now one of the 10 highest contributors in the IFC portfolio. However, this was not the case until quite recently, because it was perceived within the IFC that Mexico no longer required its support; however Mexico’s income inequality and the economic crisis of 2008 and 2009 hit the country severely, increasing poverty levels and confirming that the IFC still had a role to play. Following the crisis, the World Bank put in place very quickly a financial support program, and our reactivation was a little slower because unlike the World Bank, we are market driven, meaning we go where the market dictates. There are areas where we have played an important role, especially in renewable energy. We have invested a great deal in wind power in Oaxaca. We have European investors as well, and have invested in a solar-electricity power plant in Baja California. It is a 30MW plant and the first merchant solar-power plant, making it an important project.

What is the importance of your investment plan in the petrochemical park that Braskem Idesa is building in Veracruz for Mexico’s petrochemical industry, and what are your expectations regarding its impact for the economy of the region?

We started working to develop the relationship with Idesa, the Mexican partner of this project, in 2009. After a year and a half of talks, it called us with an offer for a major, challenging project. We realized the project’s importance, and agreed to support it. It has been awarded international recognition and the financial arrangers and backers have been arranged. We believed that the project was important because it was the largest petrochemical project in the country for 25 years. We had committed a relatively large amount of money to it as well, roughly $630 million, more or less half from our own balance sheet, and the other half from external banks. The project is only a kilometer away from the city of Veracruz. The impact on development fields have resulted in manufacturing jobs, plastic production, and various groups have been enticed by the success to move employment back to the area.