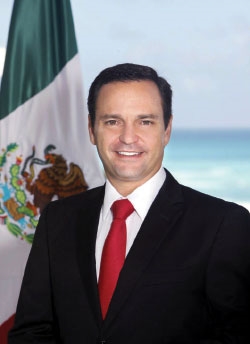 Back to the Beach

Paul Carrillo de Cáceres has lived in the city of Cancún since he was 5 years old. He joined the municipality of Benito Juárez Institutional Revolutionary Party (PRI), on January 23, 1995, when he was 23 years old. Cáceres studied at the University of Monterrey from 1990 to 1994, and graduated with a degree in International Studies. He was elected President of the Municipal Executive Committee of the PRI in Benito Juarez, Quintana Roo from 2007 to 2008 and from 2012 to April, 2013, during which he led over 500 actions for the membership and supporters. While in public office, he served as Managing Director of Citizen Participation in Benito Juárez, and later as Chief of the Institute for the Promotion of Housing and Property Regularization, later elected as Deputy Director of the XIII Legislature of the State President Tourism Commission, from March 24, 2011 to October 25, 2012, during which time, the mayor promoted bills championing young people and the tourism sector.

Share on:
What is the importance of this year’s Mexico’s Annual “Tianguis Turí­stico,” which has been held in Cancún? Some 44 years ago, Cancún did not exist, yet today it is a […]

What is the importance of this year’s Mexico’s Annual “Tianguis Turí­stico,” which has been held in Cancún?

Some 44 years ago, Cancún did not exist, yet today it is a brand that is well known worldwide. We have all succeeded in our efforts, and I think Cancún is one of the regions most entitled to host such an important touristic event for the country. This year’s Tianguis Turí­stico edition exceeded expectations, with an economic impact of more than $15.5 million. For example, last year’s Tianguis in Puebla brought together people and companies from 43 countries, while this year there were more than 60 countries represented at the event. In this context, we welcome countries such as Vietnam and Slovenia for the first time. In addition, we had above average hotel occupation rates and more than 35,000 business tables were set up during the event. Our main aim is to make this economic impact visible in the lives of Cancún’s citizens.

How do such events contribute to expanding the brands Mexico and Cancún worldwide?

Mexico is the second largest recipient of tourists in North America and Latin America combined, just behind the US. We received almost 24 million visitors in 2013. Quintana Roo receives around 10 million visitors out of that number, while Cancún receives around 4 million. Our goal is to sustain the positive trend, and we focus all our efforts on achieving this. Tourism represents a significant share of Mexico’s GDP, and plays a key role in national transformation. This is something that President Peña Nieto has understood well by incorporating tourism as one of the key drivers of his public policies, labeling the industry a strategic sector, and increasing investment in it by organizing events such as Tianguis Turí­stico. In fact, the current administration altogether with the federal and state government has already invested more than $46 million in paving roads over the past six months. President Peña Nieto also announced a $14 billion budget for the tourism industry, which will prioritize the recovery of beaches.

How can tourism contribute to the further development of Cancún?

The citizens of Cancún, regardless of their places of origin, are the region’s main assets. Cancún is the dream destination for many recently graduated youth who want to work in the tourism industry, and once they arrive they perceive Cancún as a land of opportunities. Thanks to that commitment, and the character of these and many other people, Cancún today is one of the leading tourism destinations in the world.

What are the strategic goals of the Cancún brand in the tourism industry?

Over the years, Cancún has become a top destination for “Spring Breakers” from the US. Industry research reveals that many of these people return with children once married, thanks to their fond memories of the service they received and the quality of the resorts and beaches. Our goal is to achieve this kind of stability within other segments and guarantee an average occupation rate of above 80% throughout the year. All strategies are implemented alongside the government and the Mexican Tourism Confederation. For example, the success of this year’s Tianguis Turismo was due to the perfect combination of these three institutions and their efforts.

What business opportunities does Cancún offer to investors?

The real estate industry is starting to show positive trends following four difficult years. We will finally complete the 2013-2030 territorial classification plan, setting up the guidelines for those interested in developing hotels, or similar projects. We have to boost the development of certain tourism projects away from the coastline, as it is already fully urbanized. These new projects we want to push forward will also help us to reach other segments of the economy; basically, the plan will involve the development of the city and its hospitality industry. Also, I should mention that the center of Cancun is undergoing a thorough renovation after 44 intense years of existence. It is a modernization process that involves a large investment of over $40 million in the construction of new buildings, and related infrastructure and services. In short, we are in the process of developing a city far beyond the hotel image it had many years ago.

How is the nature of tourism changing in Cancún?

We have two main focuses for the development of tourism; in sports tourism we organized the first international fishing tournament in the history of Cancún, with the participation of 64 boats from around Mexico. In addition, golf tourism could be a future element in our strategy. The other type of visit we would like to boost is cultural tourism linked to musical events. Recently we hosted Ricky Martin, Enrique Iglesias, and Bon Jovi, among others, and such events clearly bring guests. Our idea would be to create a widely appealing cultural calendar to attract further international interest. I should also mention that MICE tourism is one of the segments in which we see the greatest potential for Cancún. In my opinion, this component comes second in the ranking, just behind family tourism.

How do you see the future of Cancún?

Cancún never had a municipal president raised in the area, so this novelty has encouraged us in many ways. My cabinet is entirely composed of young people who were born and raised here, meaning that the level of commitment to what happens in Cancún is higher than ever. And again, the urban development plan is going to play a key role in the Cancún we all want to see in the future.