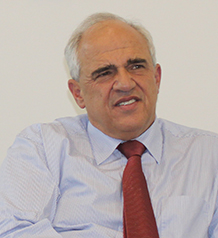 Ernesto Samper Pizano, the Secretary General of Union of South American Nations, was President of Colombia from 1994 to 1998. He has held various executive positions, including Ambassador to the Assembly of the United Nations in 1983 and Minister of Economic Development from 1990 to 1991. He studied Law at the Javeriana University of Colombia and later obtained a Master’s Degree in Economics. Pizano has received several national and international awards, including the Grand Cruz de Boyaca, (Grand Cross of Boyaca) in Colombia, the Orden del Libertador Simon Bolivar, (Order of the Liberator Simon Bolivar) in Venezuela, among others.

Share on:
TBY talks to Ernesto Samper Pizano, Secretary General of The Union of South American Nations (UNASUR), on the importance of the Union, its priorities, and Ecuador's vital contributions to its projects.

What are the primary tasks undertaken by UNASUR?

Ours is a young organization that brings together all political players of the region and streamlining the projects taking place. Among the most important projects we handle is the convergence of all regional projects taking place, including Mercosur, the Pacific Alliance, and ALBA countries, among others.

What are the main differences between the construction processes of the EU and UNASUR?

We start off from a different point of view; as a region, we have a common language and history, as well as a similar geography and conditions. We are the fourth largest economy in the world and we started building this on the common regional identity the countries in the region display. We have common regional projects within the infrastructure, connectivity, and institutionalization fields, among others.

The Banco del Sur aims to become the main financial institution in the region. At what stage of development is the bank today?

One of our main objectives is to financially strengthen the region through several tools such as the Andean Development Corporation, the Latin-American Reserve Fund, the Mercosur Infrastructure Fund, and the Southern Bank. This project has developed at a slow pace, but has already established its directory. I believe it will play a key role in leveraging the resources of the region. We also have several alliances with other international finance organizations. Our aim is to co-finance infrastructure projects in the region. UNASUR has a list of 32 priority infrastructure projects, of which we will co-finance seven. The main feature of these projects is that they involve at least three countries. For example, there is the highway from Caracas to Buenaventura through Bogotá and the railway connection from Southern Chile to the central railway corridor in Bolivia. Our other priority in the social field is inclusion, and in the political sphere it is social participation in political processes, while in the economic arena our priority is to create regional value chains . We are a region sharing the benefits of our land—oil, gas, agriculture, and so forth. To begin adding value to our resources we have several infrastructure and connectivity projects such as a common fiber optic network that will have a submarine connection with Europe. This project will be completed within five years. We also work on competitiveness through the use of cutting edge technologies.

How would you assess the new defense policies that UNASUR is keen to implement in the region through this school?

In April 2015 we established the South-American Defense School, which aims to achieve a higher level of regional security. We work towards common security and defense policies regarding several risks as climate change and in order to promote sustainability, and biodiversity, as while we are a wealthy region, we also stand to suffer considerably from such threats. The curriculum is also concerned with civil security. The school is the best example of the regional commitment to tackle such issues from a common perspective. With the creation of the South-American Defense School the region goes from the conflict hypothesis to the trust hypothesis.

Peru has repeatedly expressed its interest in developing a dispute resolution body within UNASUR that could serve as an alternative to the CIADI. What is the status of this effort and how could it benefit UNASUR countries?

The initiative has already achieved virtually 100% consensus. I would speculate that current dispute resolution mechanisms are obsolete and uniformly result in litigation. We have a completely different approach that instead prioritizes consensus. Naturally, too, we understand the need to balance national and personal interests where disputes arise.

You recently met with Peru’s President Humala. What was the outcome of that meeting and how did it contribute to regional integration?

President Humala has two focuses within UNASUR: social inclusion and the ties between the private sector and UNASUR. Meanwhile, we are due to host the International Energy Forum in Quito in September 2015. The main players of the energy industry in the region will take part in this event to build bridges between the industry and UNASUR. President Humala believes in the strategic importance of such events.