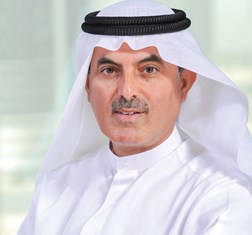 Bank of the Future

Abdul Aziz Al Ghurair is the CEO of Mashreq Group and member of the Board of Directors of Abdullah Al Ghurair Group of Companies, one of the biggest and most successful business groups in the UAE. In 2012, he was appointed as Chairman of the UAE Banking Federation. Throughout his career he has held various dignitary positions, and his wide experience in the banking industry and business have made him a well-known personality in the region. He was elected as Speaker of the United Arab Emirates Federal National Council (UAE Parliament) for a tenure of four years, which ended in February 2011.

How do you assess Mashreq Bank’s contribution to the development and growth of Dubai over the past decades?

Since its inception 50 years ago, Mashreq has not stopped distinguishing itself as a bank of the future. Innovation has been deeply embedded in the DNA of Mashreq throughout; since its foundation in 1967, Mashreq has enabled some of the UAE’s iconic projects. The bank has always been at the heart of Dubai’s economic boom, undertaking initiatives that were deemed impossible. Starting with the deepening of the Creek in the 1960s, Mashreq enabled the construction of the Dubai’s most significant infrastructure projects such as Dubai International Airport, Burj Al Arab, Dubai Metro, Burj Khalifa, and Palm Jumeirah—the first offshore development of its kind at the time; it was built in 2003 for about USD5 billion. Mashreq’s commitment to making its customers’ lives simpler was evidenced when it introduced industry-first innovative products, such as credit card, ATM, and state-of-the-art mobile banking app. The launch of Mashreq Neo—the UAE’s first full-fledged digital bank—is another example of how we addressed emerging customer needs. It also marked a new era in the digital transformation as digital commerce and cashless payments were identified as top government priorities. Mashreq’s commitment to a digital future is closely aligned to its strategy of investing heavily in its people, and further developing the Emirati talent pool; Mashreq is one of the few banking institutions to have a dedicated national development program. Notably, the number of UAE nationals who have joined the bank in the past five years has grown exponentially, highlighting the bank’s commitment to supporting the UAE’s vision to grow future leaders and to foster an empowered Emirati workforce.

How do you access the potential for Dubai becoming a leading regional Fintech hub?

Dubai boasts an unmatched infrastructure and innovation ecosystem, providing a perfect environment for technology and disruptive businesses. In 2017, the Dubai International Financial Center (DIFC) established a USD100 million fund to invest in fintech start-ups. Since 2010, roughly USD100 billion has been invested globally into the fintech industry according to Accenture, clearly demonstrating an immense appetite for its development. Moreover, FinTech Hive, DIFC’s start-up accelerator, is one of the first fintech accelerators in the Middle East, Africa, and South Asia region, and Mashreq is a first-round partner in this initiative. Mashreq has managed to stay ahead of the game so far. We have been making significant investments in artificial intelligence, robotics, and future technology over the past two years. This means Mashreq is lessening its reliance on human resources as it prepares for the digital future.

Dubai has been working towards the goal of being the preferred investment destination for foreign capital. How do you assess the success of these efforts?

Dubai attracted USD7.4 billion of inward FDI last year, a 7.1% YoY increase bolstered by investment projects from the US, Europe, and Saudi Arabia. In particular, the emirate is a top global destination to invest in technology and technology transfer, with medium- and high-tech ventures accounting for more than 60% of investment projects, the latest Dubai FDI Monitor report said. The UAE government has been taking steps to increase FDI inflows. These measures include encouraging new businesses to set up in free trade zones with lower registration costs, streamlining regulation in emerging growth sectors such as Fintech, and announcing plans to relax corporate ownership laws. Dubai’s performance can be regarded as reasonably well in a not-so-good global trading environment.

The economic outlook looks positive with firmer oil prices, easing fiscal consolidation, and the pickup of global trade and investments ahead of Expo 2020. Our key areas of growth will be contract financing, education, healthcare, energy and renewables, and real estate. Outside the UAE, we have a target of around 25-30% revenue contribution from our international franchise. Saudi Arabia, Egypt, and India are important markets for us and we have already launched several initiatives in these countries.