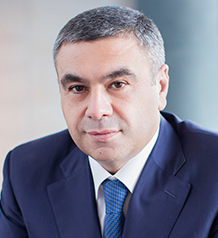 Chairman of the Board, Bank of Azerbaijan (IBA)

Elmar Mammadov was born in 1967. In 1991, he graduated from the Department of Finance and Credit at Azerbaijan State Economic University and in 1996 from the law department of Baku State University. From 1990-1995, he held various positions in the State Tax Inspectorate, from 1995-2004 in the International Bank of Azerbaijan, and from 2004-2009 in Kapital Bank. Between 2009 and 2013, he was the Chairman of the Executive Board of Kapital Bank OJSC and in 2014-2015 of Azer-Turk Bank. Since July 2015, he has been the Chairman of the Executive Board of the IBA.

Share on:
What measures have been taken so far to implement the decree of the President of the Republic of Azerbaijan regarding the privatization measures at the IBA? The government of Azerbaijan […]

What measures have been taken so far to implement the decree of the President of the Republic of Azerbaijan regarding the privatization measures at the IBA?

The government of Azerbaijan has taken a series of measures to meet the objectives stated in the decree of the President of the Republic of Azerbaijan on stabilization measures and preparation for the privatization of the state share in the IBA. In fact, measures in this direction are still being taken. The decree identifies the removal of problematic assets from the bank’s management and their transfer to a specialized agency as one of the top priority issues. Several tranches totaling AZN3 billion were allocated to the Bank in 2015 with this aim. The bank removed a portion of high-risk assets from its own management and transferred them to AgrarKredit. Thanks to this state support, the volume of IBA’s high-risk assets has been substantially reduced, enabling the bank to acquire a fairly large volume of liquid assets. It is also worth noting that when problem assets were removed from the Bank’s balance-sheet, their balance value was adopted as the selling value and the interest accrued on problem loans was added to it. This represents tremendous state support for the bank. The state has also taken into consideration the risks that the International Bank of Azerbaijan may face in the aftermath of the shift to the floating currency rate in December 2015 and increased the Bank’s capitalization. The general assembly of shareholders of the International Bank of Azerbaijan decided to increase the Bank’s registered capital through the emission of new shares in the amount of AZN500 million in February 2015, bringing it to a total of AZN1,141.3 billion. This step will contribute to the bank’s viability and credibility and mitigate the risks associated with the exchange rate of the manat in relation to other currencies.

What is the IBA’s agenda regarding the restructuring of its arrears to international financial institutions?

The bank’s meetings and negotiations with foreign partners will continue as planned. Discussions are also underway with international financial institutions and investors. The goal of this is to update foreign partners on the positive developments at the bank and identify directions of potential cooperation. Another important objective is to strengthen the bank’s financial sustainability by lowering the interest rates on financial resources attracted from foreign sources. This has been possible in respect to several partners. In particular, by attracting resources with low interest rates, the bank managed to repay a portion of its arrears with a higher interest rate. As of August of 2015, the IBA repaid its arrears to foreign financial institutions in the amount of $550 million. In addition, IBA-Moscow’s arrears of $140 million have also been repaid by the IBA. Thus, the bank has cleared its foreign debt of $700 million over the course of five months. Thanks to the reduction of the bank’s foreign liabilities, our market risks have decreased and financial sustainability improved.

The IBA attracted a ‚¬50 million loan from the European Investment Bank last year. How will this loan support SME development in Azerbaijan, as well as the capitalization of local companies?

This loan agreement between the IBA and the European Investment Bank was signed in September 2015. The funds will contribute to SME development in Azerbaijan. They will be channeled into priority business projects in this sphere. Economic diversification and an increased share of small and private enterprises in GDP represent key directions of the country’s strategic development policy. From this perspective, the loan agreement signed between the IBA and the European Investment Bank will contribute to this policy, facilitate the successful implementation of business projects on the ground, and improve employment opportunities and living standards of the population. We believe that a partnership with such an authoritative international financial institution will ease the access of small and medium-sized Azerbaijani businesses to financial resources. This will particularly benefit those engaged in the non-oil industrial and service sectors. Another important aspect of this agreement is that, in addition to contributing to the economic diversification of Azerbaijan, the credit resources will also invigorate the IBA’s standing.

What is your outlook for the country’s economic development given its relative slowdown in the aftermath of the global recession?

The economic development expectations were stated in the article of President Ilham Aliyev headlined Future of the Azerbaijani Economy, which was published on the website of the Davos World Economic Forum in January 2016. Despite the deep economic and financial recession in the world, Azerbaijan is trying to safeguard itself from the implications of the downturn. The economic successes achieved to date are evidence of that. The fact that oil prices have plummeted under the impact of political factors has led to a reduction of hydrocarbon revenues in oil producing countries, urging them to revise their economic priorities; yet, having foreseen such a necessity several years ago, Azerbaijan embarked on economic diversification to reduce their dependence on the oil price. These developments were enshrined in various state programs, in particular the Azerbaijan 2020: Outlook for the Future concept approved by President of the Republic of Azerbaijan Ilham Aliyev in December 2012. If we look at the strategic objectives and specific tasks identified in this document, we can see that Azerbaijan has braced itself for a period of new economic realities. Under such circumstances, we do not think it will be too difficult for Azerbaijan to turn the new challenges into opportunities. The country’s financial and banking sector is expected to play a major role in this. Banks are perhaps the most important partner and instrument for the development of the real economy. The main mission of the banking sector at the current stage is to switch from an aggressive development strategy to one of sustainable growth, restoring people’s confidence in banks.

What objectives has the IBA set to achieve these goals?

The IBA is a backbone bank, contributing to economic diversification and financing private-sector development. Our main goals are to protect the bank’s positions in key business directions. Financing the real sector of the economy, supporting entrepreneurial projects, and contributing to the implementation of a number of important state projects are of particular importance to us. The process of restructuring banks in the country has entered a qualitatively new stage. Measures to stabilize banks possessing high-risk assets, consolidate several banks, apply new regulatory procedures to provide insurance for bank deposits, and expand the market for mortgages and securities attest to the fact that the country’s financial sector is on the eve of a major transformation in the near future. The IBA is working hard to protect and further enhance its market positions in the new environment. One of our strategic priorities is to work as a team and develop a corporate culture. In addition, we see the optimization and effective management of business processes as issues on the Bank’s agenda for the coming years.

Azerbaijan will host the Formula One European Grand Prix this summer. How can this sporting event contribute to the attraction of foreign investment to the country?

The environment of stability and development has allowed Azerbaijan to assert itself as a sporting nation. Our country has already hosted numerous international events, including the inaugural European Games, which were held at the highest possible level. It would be appropriate to view Azerbaijan’s reputation for being a sporting nation through the prism of its successes in the area of tolerance, intercultural dialogue, and multiculturalism. It is no coincidence that 2016 has been declared the Year of Multiculturalism in Azerbaijan. The Formula One Grand Prix to be held in Azerbaijan this summer and the Fourth Islamic Solidarity Games due in 2017 will make an important contribution to this policy. These international events also serve as an excellent opportunity for Azerbaijan to introduce its investment environment to the world and to attract the attention of foreign investors. The influx of tourists to the country in the run-up to these major events also triggers the development of banking and service sectors in Azerbaijan. Sport holds a special place in the IBA’s corporate responsibility agenda. We have sponsored a number of important sporting events and intend to carry out this mission in the future as well.