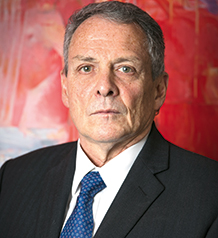 Juan Jose Echavarrí­a currently serves as Governor of the Central Bank of Colombia. He led the mission to restructure coffee in Colombia. He was a member of the Board of Directors of Banco de la República from 2003-2013; he was also executive director of Fedesarrollo between 1998 and 2003. He was Minister Plenipotentiary of Colombia to the OAS, and deputy Minister of Trade during César Gaviria’s administration (1994-1998). He was dean of economics at Universidad Nacional de Colombia from 1984-1985. He studied engineering at the Escuela de Minas in Medellí­n, then pursued graduate studies at Harvard and Boston universities, and obtained his PhD in economics from Oxford University.

Share on:
TBY talks to Juan José Echavarrí­a, Governor of Banco de la República, on key successes in the past year, the bank's response to the drop in Colombia's credit rating, and its outlook for growth.

What were the main accomplishments of the bank in 2017, and what are your priorities for 2018?

Our main accomplishment was the reduction of inflation. A low level of inflation helps the economy grow more in the long run, protects Colombians’ real income and contributes to sustainable and dynamic capital markets, among others. In June 2016, we had 9% inflation, and when I became governor in January 2017 it was 7.5%. We closed 2017 with 4.09%, and the goal is to move to our long term target of 3% in 2018. The reduction of inflation allowed us to reduce policy rates by 325 points, from 7.75% to 4.75%, our second achievement. Private banks also reduced most rates, active and passive, short term and long term, which means monetary policy has been transmitted to the rest of the economy. The only exception has been interest rates on consumption, which fell slowly, an event partially related to higher risk in an economy with slow growth. However, interest rates on consumption will fall once the economy recovers its long-term growth. The economy will probably grow 1.6-1.8% in 2017, a bad figure by Colombian historical standards, 2.7-2.9% in 2018 and 3.3-3.5% in 2019, close to Colombian potential GDP growth.

How can the next government consolidate the economic recovery expected by the Central Bank in 2018?

Growth in the last few years has been lower than in the past, not only in Colombia but in many other countries in the region. On the other hand, comparative evidence shows that the size of the negative shocks suffered by the Colombian economy was much higher than in other countries and much higher than during other shocks, including the 1930s. Oil prices fell much more than other commodities (i.e. metals), and the importance of oil in the Colombian economy is extremely high.

What was the bank’s first reaction to the drop in Colombia’s credit rating?

The market’s reaction after the drop has been negligible: the exchange rate even fell (i.e. a revaluation) and bond prices increased. Neither the Ministry of Finance nor the Central Bank were expecting the drop, and we agree with the Minister of Finance: it is clearly unjust when focusing on outcomes (low growth and so on) instead of the adjustment process, which was correct. In other words, those policies implemented will help future growth and were needed.

Which sectors will see stronger growth in 2018?

In general, I am optimistic about future Colombian growth. Corporate taxation was reduced, a historic peace agreement was signed, financing conditions are excellent, and massive infrastructure projects have been undertaken. The large devaluation of the exchange rate in 2014-2016 will favor exports, manufacturing growth, and agriculture. Manufactured exports to the US and Ecuador are growing by 12% and 20%, respectively. Potential Colombian growth is larger than actual growth, with values close to 3.3-3.5%, a figure we expect to obtain in 2019.

What is the Central Bank’s macroeconomic outlook for 2018?

We had a current account deficit of 6.5% in mid-2016 that stood at 3.7% at the end of 2017. This means the adjustment of the external sector is not complete yet. But the effects of most shocks will end in 2018: the devaluation of the exchange rate is gone, and the exchange rate has been extremely stable for more than 12 months; we hope that bad weather will not affect the economy this year; and there are no tax reforms in sight. Besides, oil prices have increased from USD30 to more than USD65 per barrel. The level of foreign direct investment (FDI) in 2016 and 2017 is similar, despite the fact that a large company, Isagen, was sold in 2016. Portfolio flows continue to enter the country, helping us with the fiscal and external adjustments.