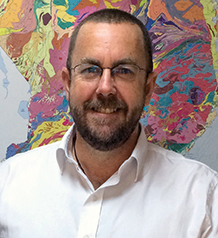 Ben James is a geologist by training with over 15 years of experience in the exploration and mining industry. He has worked for various companies including Oceana Gold, RSG Global, Katanga Resources, Hill 50 Gold, and Herald Resources. After joining Baobab Resources as Exploration Manager in 2006, he then went on to become Technical Director in 2008 and assumed the role of Managing Director in 2009.

Share on:
TBY talks to Ben James, Managing Director of Baobab Resources, on the exploration and development of mineral resources in Mozambique.

How have Baobab’s activities evolved in Mozambique?

Baobab Resources has been wholly focused on the exploration and development of mineral resources in Mozambique since 2005. The company, working with its joint venture partner, the IFC, has discovered and defined a 750Mt iron ore resource immediately adjacent to the core iron and steel making raw materials of coal, power and water. By leveraging the project’s unique access to these resources, Baobab intends to establish a vertically integrated mining and steel-making operation, producing steel products to supply the industrial, commercial, and urban growth in Mozambique, as well as regional end-markets.

Tete province is central to three major regional growth areas and attracts the lion’s share of fixed capital investment in the Southern African Development Community, with existing infrastructure—in particular international port, rail and road networks—being rapidly refurbished and expanded. Significant investment is also directed towards power generation. Mozambique is home to southern Africa’s single largest hydroelectric scheme at Cahora Bassa and there are numerous other hydro, gas and thermal plants in the pipeline worth an estimated $10 billion. This explosive regional growth underpins a sustained and rapidly expanding demand for steel. Currently Mozambique consumes approximately 400,000 tons of steel a year, which translates to less than 15kg per person per year. Consumption is expected to double within the next decade, but even at double the per capita consumption, Mozambique will be a long way behind the curve in comparison to its regional peers—underlining the long-term growth potential not just in Mozambique, but in the neighboring southern African region. Situated 50km north of the provincial capital of Tete, Baobab’s iron and steel project is centrally located in the heart of the regional development picture, ideally positioned to service the Mozambican demand for steel as well as the neighboring landlocked markets of Zambia, Malawi, and Zimbabwe, which are almost entirely dependent on steel imports.

The project has ready access to the Moatize coalfields. How is this an advantage?

Baobab seeks to utilize the thermal coal being produced as a wash by-product on the project’s doorstep to convert its captive iron ore into value added steel. Baobab’s c.750Mt iron ore resource is exceptional, with 550Mt of the inventory underlying a footprint of just 2.5sqkm. At 0.5Mtpa of steel production, there are sufficient resources to support over 100 years of operation (the first 30 years of mining will be at a staggeringly low strip ratio of just 0.15).

What makes the iron and steel project such an important development and how do you see this project transforming the province and country?

The Tete iron and steel project is of game-changing importance for Mozambique. It attracts unprecedented government support and is strategically aligned with the 2015 presidential manifest and five-year plan, which focuses on industrialization and job creation. The size of Baobab’s resource and technology selection will underpin over 100 years of steel production and is scalable to meet the future demands of Mozambique and the region. With its captive iron ore, abundance of low cost coal, and geographically competitive location, Baobab will be operating at the bottom of the global steel cost curve. This, combined with a growing national and regional steel demand, translates into a robust economic proposition delivering long-term investor returns. By ensuring that the entire value chain remains in country, the project will also deliver unprecedented socioeconomic returns at both local and national levels. The project marks a profound shift in the way we think about African resources. With Africa emerging as the next big growth market, the previous model of exploit and export is rapidly becoming outmoded. In-country beneficiation is an essential catalyst for nation building and industrialization. By fully utilizing their raw materials, countries like Mozambique will be empowered to fast track the development process and achieve its full potential.