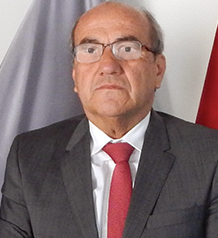 Beefing up the Ports

A retired naval official, Edgar Patiño Garrido received his bachelor’s in maritime sciences and his master’s in economics, national defense, and development. With more than 28 years’ experience in maritime activities related to the public sector, he has extensive knowledge of planning, budgeting, and economic and financial operations and administration. He is an expert in optimizing processes, improving client services, reducing operational costs, and maximizing profitability and productivity. He has spent the past eight years managing project planning for public-private partnerships (PPPs) related to transport and ports.

Share on:
TBY talks to Edgar Patiño Garrido, President of the National Port Authority (APN), on the role of Peru's ports in the economy, the impact of the Panama Canal expansion, and efforts to tackle crime at ports.

What is the role of Peruvian ports in the country’s economic development?

The economic development of a country is based on a logistics chain that integrates its production, transport, and distribution systems. From this perspective, ports are an important part in the development of international commerce. Since nearly 90% of our exports and imports pass through them, the APN has been an important step in the promotion and development of the country’s ports. There are currently 81 port installments in the country, including maritime, river, and lake systems. Of these, 26 installments are for public usage and 55 for private. And the state only plays a normative and supervisory role, leaving the management of these terminals to the private sector.

What innovations or developments are being introduced into the port system in Peru?

As a public-private initiative, the Peruvian state has carried out a series of port concessions, a process that began in 1999 with the Matarani Port Terminal and followed, in 2006, with the concession of the New Container Terminal-South Pier of Callao Port. These were followed by the Paita Port Terminal in 2009 and the Multipurpose North and Loading Minerals terminals at the Callao Port in 2011. These modernizations have brought much greater efficiency and widened our international commerce, reduced operation times, and improved flows in the logistical chain. Altogether, these concessions generated infrastructural investments in the ports of nearly USD1.4 billion for public use and USD700 million for private use.

How could the expansion of the Panama Canal affect Peru?

Given its strategic position, the expansion of the Panama Canal will grant Peru opportunities in the growth of international commerce by permitting the entry of larger ships. The Peruvian state is already preparing for this new scenario by giving priority to the development of port infrastructure and ensuring that land routes improve connectivity in the logistical chain at the national level. This development is in addition to the implementation of the state’s productive diversification plan, designed to generate increased economic growth in the country.

What steps is APN taking to increase port security and prevent drug trafficking?

A very important subject for APN is port security. As the modernization of the ports advances, the increase of illegal stock transfers is worrying. To combat this, the Peruvian government has allocated a large amount of funds, especially in the fight against the illicit trafficking of drugs (TID). It is also fighting to lower coca leaf cultivation, reduce merchandise transfer routes, and strengthen control levels in the port installations by continuously improving the international ship and port facility. As part of this effort, in 2015 the APN and the Anti-Drugs Directorate (DIRANDRO) of the Peruvian National Police (PNP) signed agreements in order to combat activities related to TID and organized crime at the port installations. As a result of these agreements, we formed the Port Intelligence Committee to prevent illegal port-related activity, and invited DIRANDRO personnel to help monitor the Callao port. APN has also forged an agreement with SUNAT to carry out joint underwater inspections of ships in the Callao port. With the support of APN boats, SUNAT divers will verify that the ships’ hulls do not contain TID.

What are your main objectives for 2016?

The work of the APN is to ensure that port infrastructure guarantees an efficient merchandise trade, which we are achieving. Various projects are on target. In coordination with the MCT and Proinversión, we are evaluating private initiatives of the Salaverry, Chimbote, and Ilo port terminals in order to develop them for public use. Our next target is to consolidate the participation of ports as an essential node in the logistical chain.