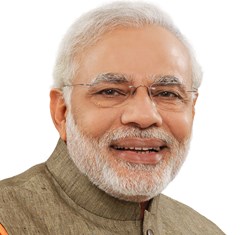 Narendra Modi grew up in Vadnagar, India. He entered politics as a youth and quickly rose through the ranks of Rashtriya Swayamsevak Sangh, a Hindu nationalist political party. He was the Chief Minister of Gujarat from 2001 to 2014, and is the Member of Parliament for Varanasi. He was elected the 14th prime minister of India in 2014.

Share on:
Narendra Modi, Prime Minister of the Republic of India, on India's relations with the UAE, the significance of the construction of a Hindu temple in Abu Dhabi, and fostering greater goodwill.

In this sixth edition of the World Government Summit, I have been honored with the role of the chief guest and the honorable guest country given to India. This is a matter of pride and great happiness not only for me, but for all Indians. In the form of Prime Minister, I have traveled to the Gulf region several times before 2018. However, whenever I come here to the UAE, I feel a special attachment.

After several decades, India’s relations with Gulf countries have become so deep, so comprehensive, and so vibrant. Today, our dynamics with the Gulf countries is not just confined to a buyer-seller relationship, but it has become a true partnership. I was in Abu Dhabi and signed several agreements, one of them, the Lower Zakum Concession, is the first-ever investment of an Indian company in the upstream sector of the Middle East. The brighter aspect of the partnership has begun.

The Indian community not only sowed the seeds of its dreams along with the dreams of local people, but also with the same commitment, by considering this place as its own home. India takes pride in that more than 3 million Indians live in the Gulf countries, as they have become partners in the developmental journey of this region.

In the UAE, people were surprised when His Highness Crown Prince took the initiative of constructing a Hindu temple in Abu Dhabi when I came here last time. I would like to express my gratitude to His Highness Crown Prince on behalf of all the 1.25 billion Indians. The construction of a temple is significant also in the form of a bridge of goodwill. We have been raised in a tradition in which a temple and a holy place is an agent of humanity, where a holy place is an agent of harmony. I believe that this temple will be unique in terms of architecture, in terms of technology, and in terms of the message it gives. It will also be an opportunity to make the world community feel the mantra which we have followed for living our lives: the whole world is one family. And because of this thing it will also become a medium for acquiring a unique Indian identity.

I would like to tell all those who are related to the construction of the temple that the rulers of this place have shown so much respect for India, have given so much respect to India’s cultural traditions: now it is our responsibility not to leave any loose end, not to commit any mistake.

In a way, a small India resides here. There is not even a single corner in this country where India is not represented. And that is why you can experience very well how fast India has been changing and with what kind of confidence 1.25 billion Indians have been moving ahead to realize their dreams.