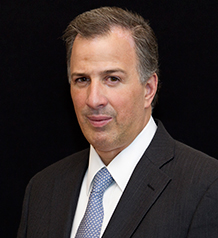 José Antonio Meade Kuribreña received a degree in Economics from the Instituto Tecnológico Autónomo de México (ITAM), a Law degree from the Universidad Nacional Autónoma de México (UNAM), and a PhD in Economics from Yale University. He has worked as a professor at ITAM and Yale University, and also served in various positions in the finance sector, as well as being a former Secretary of Energy. After serving as the Secretary of Finance and Public Credit, he became Secretary of Foreign Affairs under the Peña Nieto administration.

Share on:
TBY talks to José Antonio Meade Kuribreña, Mexico's Secretary of Foreign Affairs, on its ambitious foreign policy agenda, the future of trade with Asia, and its role in facilitating cooperation between its neighbors.

What are your key priorities for 2015 and what goals would you like to achieve once the “Sexenio” finishes in 2018?

In a globalized world, foreign policy is the tool for identifying opportunities and steering clear of the risks any country faces. Mexico’s foreign policy priorities hinge on the country’s own growth and development and must contribute to achieving an economically prosperous country. Central and North America, as well as the Caribbean, carry special weight for us. With the Caribbean nations, we have discussed how to increase agricultural productivity and improve cooperation on energy issues. In Central America, our dialogue is centered on economic growth, infrastructure, better standards of living and social inclusion. Mexico, the US and Canada have built one of the most integrated regions in the world. Through the Pacific Alliance, Chile, Colombia, Peru and Mexico are pushing for greater mobility of persons, capital, goods and services. We are also aware of the potential of the Asia Pacific region, and Europe has been a source of long-term productive investment. Our foreign policy toward the Persian Gulf region has focused on increasing our presence there, and collaborating in areas such as renewable energy and education. We seek greater cooperation with African nations, and to that end we are expanding our diplomatic presence in the continent. By 2018, we see Mexico as a country that is robustly contributing to cooperation and governability in the world on a global scale.

What is your outlook on the APEC forum? What steps should Mexico take to make the region more appealing for international trade with Asia?

Mexico will continue its active engagement in APEC, as the forum is a gateway to Asia-Pacific economies. We will work on a feasibility assessment of a Free Trade Agreement of the Asia-Pacific (FTAAP). In the longer-term, Mexico’s areas of interest are integration of SMEs into the global economy and structural reforms.

This year marks the 15th anniversary of the Free Trade Agreement (FTA) between Mexico and the EU. What are the main achievements of this agreement?

The rationale behind negotiating the FTA between Mexico and the EU was to increase trade and investment flows by allowing preferential access to new markets while fostering strategic alliances between economic actors. The EU stands as Mexico’s third largest trading partner, and over the last 15 years, exchanges between Mexico and the EU more than tripled, from $18 billion to $65 billion. The EU is a strategic ally, a technological development pole, and the home of important firms in the automotive, aeronautical, and pharmaceutical industries, which are crucial for Mexico’s development.

What role should Mexico play to spearhead a larger integration between Latin America and its English-speaking neighbors?

Because of its geographic location and socio-cultural ties, Mexico can act as a bridge between Latin America and the US. Mexico has played an important role in accompanying US efforts to promote closer ties with the region, particularly with Central America and Cuba. Regarding Central America, Mexico has engaged and supported the Alliance for the Prosperity of the Northern Triangle, through which the United States is seeking to boost the productive sector and improve security in El Salvador, Guatemala and Honduras. We are working on the construction of a Central American gas pipeline, which will improve energy infrastructure in the region and create better opportunities for citizens.

What policies were taken in 2014 to remain on track for the Millennium Development Goal (MDGs) target of 84% for 2015?

Mexico has succeeded in achieving meaningful progress in the MDGs, as the proportion of people living on less than $1.25 per day has been halved. Primary education is now universal and youth illiteracy was reduced to 1.4% in 2012. In healthcare, malaria is close to being eradicated in Mexico. Most people now have access to piped drinking water. In terms of gender equality, women’s representation in Congress has increased: in 2012, women held 30% of the seats in the Chamber of Deputies and the Senate.