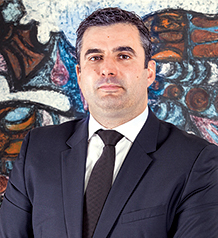 Rui Barros currently serves as CEO and Executive Board Member of Barclays Bank Moçambique; previously Rui held executive positions as Risk Head at Standard Bank in Mozambique and Atlantico Europa, the Lisbon-based operation of the Angolan banking group. Rui served as Director of Structured Finance for Lehman Brothers and as credit analyst at Fitch Ratings. He worked in capital markets and lectured in financial markets at several Portuguese universities. Rui graduated in Economics at UTAD, in Portugal, and holds a Master’s of Science degree in Finance from the Catholic University of Portugal. He also studied and engaged in academic research at Arizona State University, and recently completed the Advanced Management Programme at INSEAD in Singapore.

Share on:
TBY talks to Rui Barros, Administrator for Barclays Mozambique, on the scope of regional banking, capitalizing on economic development, and what attracts foreign banks to the country.

What strategic priorities have you set for Barclays Mozambique for the next five years?

Barclays Mozambique is positioning itself to take advantage of the country’s exponential growth potential, by gearing the bank up to support the opportunities presented to Mozambique over the next five years. Barclays recently embarked on a recapitalization process with an injection of an equivalent of $125 million in September 2014 with the express purpose of repositioning itself for growth, to take a lead role in Corporate Banking, Debt Capital MarketsA (DCM) and advisory mandates in key growth sectors, while growing its Retail franchise in Prestige and Premier Segments. Our goal is to become Mozambique’s go-to bank. We aim to be a trusted partner in the economic development of the country and its people. On this journey, we intend to become the employer of choice in the banking sector and build a sustainable and profitable operation.

What is the importance of the Mozambican market for Barclays’ overall strategy in Africa and worldwide?

Africa is one of the four pillars of Barclays’ strategy, as outlined by our Chief Executive Antony Jenkins in May 2014. Barclays Africa Group Limited (BAGL) is the legal entity listed in the Johannesburg Stock Exchange that consolidates the business of Barclays in the continent. At 30 June 2014, we had a market capitalization of $136.9 billion. We operate in 12 countries and have 12 million customers, and total assets of $977.8 billion, 10,749 automated teller machines, 1,287 branches and more than 42,000 permanent employees. Barclays Africa has majority stakes in banks in Botswana, Ghana, Kenya, Mauritius, Mozambique, Seychelles, South Africa, Tanzania (Barclays Bank Tanzania and National Bank of Commerce), Uganda, and Zambia. It also has representative offices in Namibia and Nigeria as well as bancassurance operations in Botswana, Mozambique, South Africa, and Zambia. The creation of Barclays Africa Group gives us a strong competitive advantage. We offer our clients deep local knowledge and presence and the expertise and support of a global bank. As such, we have the ability to play a key role in empowering Africa by reducing the costs of doing business, by providing and enhancing access to the continent, and by being the bridge between local and global markets. Within the continent, Mozambique is one of the key markets for Barclays. It is amongst the countries in which the Group has invested the most in recent years and equally where it expects stronger growth. We believe that in the mid-term Barclays Mozambique can be among the largest businesses of Barclays Africa.

How would you describe the business environment in the country for foreign investors?

Mozambique is quickly improving in terms of its business environment and foreign investors have very clear regulations in place and a relatively straightforward process to become established in the country. Mozambique’s proximity to South Africa is an important feature when it comes to sourcing inputs and hopefully in the future also as a market for export. The major ports of Mozambique are another important factor, with Maputo, Beira, Nacala, and Pemba being strategically located. The development of services to support your business (banking, legal firms, consulting, accounting and auditing, etc.) is also making life easier for investors. Those coming from abroad appreciate the fact that well-known brands like Barclays are present in Mozambique. The political and regulatory environment has been stable for several years now and despite some uncertainty that always surrounds the electoral periods, we believe that Mozambique offers a unique opportunity for investment.