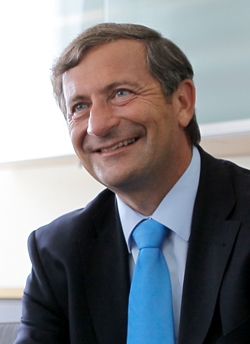 Minister of Foreign Affairs, the Republic of Slovenia

Karl Erjavec was born in 1960 and educated in Law. He has worked in several positions, including in the Office of the Human Rights Ombudsman and the Minsitry of Justice. Between 2004 and 2008 he was Minister of Defense, and in 2006 chaired the informal meeting of NATO defense ministers in Slovenia. In 2005 he became the President of the Democratic Party of Pensioners of Slovenia and between 2008 and 2010 served as Minister of the Environment and Spatial Planning. In 2011 he became a Deputy of the National Assembly of the Republic of Slovenia and in 2012 assumed his current position as Foreign Affairs Minister.

Share on:
"The agreement on the avoidance of double taxation between Slovenia and the UAE has been ratified."

What role does Abu Dhabi play in developing Slovenia’s interests and relations with the UAE?

As the capital of the UAE, Abu Dhabi represents the framework for our relations that have been developing very successfully. Having rapidly become the second largest economy in the Arab world and ranking among the 25 most competitive economies globally, the UAE is a partner of special interest to Slovenia. Its political importance and well-developed international relations make it a country with which we wish to enhance cooperation even further.

How will the agreement on the avoidance of double taxation signed between Slovenia and the UAE in 2013 affect mutual economic and trade relations between the two countries?

The agreement on the avoidance of double taxation between Slovenia and the UAE has been ratified, and will shortly enter into force. Furthermore, negotiations on the economic cooperation agreement and the bilateral investment agreement will be launched in October and December 2014, respectively. This will establish the foundations for the safe operation of Slovenian and Emirati businesses in the Emirates and Slovenia, respectively. On this basis, we can definitely expect significant growth in trade and especially in investment flows.

“The agreement on the avoidance of double taxation between Slovenia and the UAE has been ratified.”

As of March 2014, Slovenian citizens have been exempted from the need for pre-entry visas to the UAE. What effect do you see this policy having on enhancing the political and economic relations between the two countries?

Our political relations are extremely positive and constructive, in accordance with our common objectives. We understand the decision of the Emirati authorities to unilaterally liberalize their visa regime ahead of full bilateral liberalization by the UAE and the EU as a step that not only corroborates the existing interest, but also effectively strengthens the totality of relations between the two countries and their people. This opens the way for enhanced political dialogue, offers new opportunities for economic and cultural cooperation, and simplifies people-to-people contacts on both sides. It also provides the possibility of an increased tourist flow from Slovenia to the UAE. Regular high-level political dialogue was confirmed by the visit of the Emirati Minister of Economy HE Sultan bin Saeed Al Mansouri at the 2014 Bled Strategic Forum. Further, I am planning a visit to the UAE together with a delegation of Slovenian high-tech industry representatives in the first half of 2015.

Many foreign companies and corporations have set up regional offices and headquarters in Abu Dhabi. How would you characterize the tax regulations and policies of the UAE government in regard to promoting investment from Slovenian businesses in the country?

The considerable success of key Emirati businesses in the global markets does not come as a surprise, and cannot be attributed only to the favorable geographical position of the country. The UAE’s openness policy has substantially contributed to the establishment of companies that are today not only important regional, but also global, suppliers. In addition to Emirati private companies, the Abu Dhabi Investment Authority (ADIA) also plays a prominent role in foreign investment. Slovenia hopes for the greater investment involvement of both leading Emirati private entities and ADIA in the ongoing privatization of some major Slovenian state-owned companies. Another reason for the desired stronger UAE presence in Slovenia is the fact that the geographical and sectorial diversification achieved by its companies has significantly contributed to the creation of new jobs in relevant environments. Furthermore, the openness policy has been attracting foreign investment and leading global corporations to the UAE. Slovenian businesses are no exception. It is in the UAE that Slovenian companies have the highest number of representations and production facilities in the Arab world—not the least because of the favorable tax policy.

What importance does Slovenia place on the UAE in regards to its geographic position in the Middle East?

For Slovenia, the UAE is not only one of its most important economic partners, but also a financial, economic, and transport hub for its cooperation with other Gulf and Asian countries. In these sectors, the UAE excels regionally and globally; whilst on the other hand, Slovenia offers the services of its best high-tech companies in the further development of the country.

What are some of the key areas of joint cooperation underway between the governments of Slovenia and the UAE in terms of economic diversification?

The economic diversification of the UAE opens up ample opportunities for the development of various forms of cooperation. With its rich industrial tradition and successful niche high-tech providers, Slovenia can offer numerous interesting solutions to the UAE. There is also further potential in increased tourist flows. Finally, given its natural features, Slovenia can be of interest to the UAE in its production of high-quality food and in its advanced agro-alimentary industry.