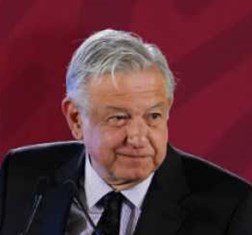 Share on:
Andrés Manuel López Obrador has a bold vision to transform Mexico and his government is working hard to realize the “fourth transformation of public life.“

I will announce to the people the following milestones achieved thus far by the government to realize Mexico’s fourth transformation of public life.

Our foreign policy is based on the constitutional principles of non-intervention, self-determination of all nations, peaceful resolution of disputes, refusal to use threats or coercions in foreign relations, legal equality across states, and international cooperation for the development, respect, protection, and promotion of human rights, as well as the fight for peace and international security. Our relationship with the US government has been cordial; we do not use aggressive language, but are dedicated to diplomacy and permanent communication. It is important to note that our neighboring government is committed to investing up to USD2.5 billion in our neighboring countries in Central America, in addition to USD3.8 billion in productive projects in our country, particularly in the south and the south east. This policy is part of a proposal to boost development from south to north to turn migration into a voluntary decision, instead of being an act forced by poverty, scarcity, insecurity, and lack of opportunity.

For the economy, we are applying the formula to put an end to corruption and impunity. These efforts will help us secure and obtain additional resources that can be used for the development and well-being of the people. That is the goal of our economic plan, basically. We seek to eliminate corruption and the privileges in order to obtain extra funds to finance the country’s development. That is why we will not have the need to modify, and we will not do so under any circumstances, the macroeconomic balance. We will never spend more than the resources the treasury collects. We will not take on more debt to finance the budget. We will responsibly manage public finances. Taxes will not increase, and new taxes will not be created.

This year, according to Social Security data, 22,628 new jobs have been created and purchasing power recovery has been improving. In terms of domestic consumption, convenience and department stores report a 2.5% growth in their January sales compared to the same month the year before. I am proud to announce we have achieved an important agreement with the private sector and workers’ representatives to increase the minimum wage by 16%, an increase in real terms the likes of which was not seen during the 36-year neo-liberalist period.

Tren Maya will be an important construction project that will benefit the states of Quintana Roo, Yucatán, Campeche, Tabasco, and Chiapas. It entails the construction of 1,500km of new railway roads for tourists, national passengers, and cargo. The estimated investment will range between MXN120 billion (USD6.2 billion) and MXN150 billion (USD7.8 billion). And 300,000 direct jobs will be created just during the construction phase. In four years, once this important network is completed, we will have the capacity to transport 3 million visitors per year, and we will increase the arrival of tourists to the archaeological areas of the Mayan World and cities like Chetumal, Mérida, and Campeche.

We are optimistic because the corruption at Pemex and Federal Electricity Commission, although once tolerated, has come to an end. Thanks to that and to the austerity plans for the government and the aforementioned companies, we have increased our investment in oil production, refining, and energy generation.
In the past year, the investment budget for Pemex was of MXN185,830 million (USD9.6 million) It is now MXN272,627 million (USD14 million), which is nearly 46% more.
The Federal Electricity Commission had MXN37,200 million (USD1.9 million) in investment last year; now it has MXN61,000 million (USD3.1 million), 64% more.
We will have the capacity to process gasoline and diesel at the refineries of Salina Cruz and Minatitlán. We will use Pemex’s existing oil pipeline to transport gas, we already have electricity, and to all of that we must add the fact that the isthmus will be entirely turned into a free trade zone; in other words, taxes and the price of energy will be reduced. That will facilitate the installation of new industrial parks that generate jobs and good salaries. All of that must have the participation and benefit for the people with absolute respect for the environment.