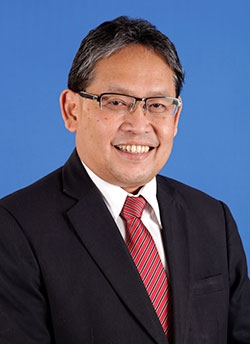 Vice-Chancellor, the University of Malaya

Professor Dato’ Dr. Mohd Amin Jalaludin is the Vice-Chancellor of the University of Malaya, having previously been the Director of the UM Specialist Centre. He is an accomplished academic, and is the current President of the Asia Pacific Academic Consortium Public Health (APACPH) and Vice-President of the Asian Federation Laryngectomee Association (AFLA).

Share on:
"The University of Malaya is the oldest in Malaysia, is well respected, and is ranked first among the finest local universities."

What is the history of the University of Malaya?

The University was established in Singapore in 1949 with the merger of the King Edward VII College of Medicine, which was established in 1905, and Raffles College, which was founded in 1928. Therefore, the university is technically 110 years old. In 1959, there were two campuses, one in Malaysia and one in Singapore, and in 1960 the campus in Kuala Lumpur became the University of Malaya, while the campus in Singapore became the National University of Singapore. Currently, we have almost 25,000 students with a ratio of 1:1 in terms of undergraduates to postgraduates. Our vision is that, by the year 2020, as a research-focused university, we will have two postgraduates for every undergraduate. Our niche courses are Engineering and Information Technology, and we are also well established in Medicine, the Life Sciences, Islamic Studies, and Social Science.

In which areas is research currently focused and what are some of its practical applications?

There is a considerable body of research being undertaken. We have a research grant of around $590 million from the government of Malaysia for five years, from 2011 to 2015, specifically for high-impact research. This grant has enabled us to establish high-impact research laboratories with excellent facilities and equipment. As a result, we have succeeded in having with us three Nobel laureates as well as Malaysian scientists who returned from overseas to work on high-impact research projects with our researchers. Our research is currently focused on both the sciences and the social sciences. For example, at the Faculty of Medicine, research has led to the implementation of a better and more effective treatment protocol for children with leukemia, which has led to an increase in survival rates. Similarly in breast cancer research, survival rates of women have improved because of the work undertaken. Meanwhile, in the engineering faculty, we have a bio-medical engineering group that is researching to produce better prosthetics for amputees. And in Islamic Studies, we have established a Quranic Center and at the Faculty of Accountancy and Business Administration, Islamic Finance and Banking is one of our leading courses. Emphasis is also given to cross-disciplinary research. For example, the Academy of Islamic studies conducts research together with the Institute of Biological Sciences on natural products and also works with our engineers, the Islamic Center for Halal Food Groups, and the Medical Center. Then we have the UM Living Lab, which conducts research on biodiversity, sustainability, and waste management. Research activities by the UM Living Lab have also led to initiatives such as the installation of solar and wind powered lighting in the surrounding areas of the UM lake.

“The University of Malaya is the oldest in Malaysia, is well respected, and is ranked first among the finest local universities.”

How is the university working to improve its place in international rankings?

We are currently ranked at 151 in the QS world ranking and aim for further improvement. The University of Malaya is the oldest in Malaysia, is well respected, and is ranked first among the finest local universities. In 2014, we published almost 4,000 research papers and, as a research university, we receive research funds from the government of Malaysia, for which we are very grateful. On top of that, the government has awarded us $590 million over five years for high-impact research. Thus, since 2007, we have managed to sustain our excellent track record of achievement and have established partnerships worldwide, notably with Nobel Laureates. We have managed to secure four such individuals to assist us in bringing fresh ideas to our research initiatives. The other 19 public universities in this country are like our brothers and sisters, and we assist one another wherever possible. Meanwhile, we are fortunate to be the only public university located in Malaysia’s capital city.

What can be done to prevent a brain drain in Malaysia?

I had the opportunity of being involved in the Malaysian Brain Gain programs. The first such program was a failure because, while many people wanted to return, Malaysia lacked the necessary infrastructure to make it a viable option. In the second program, we improved and learned from our mistakes. The University of Malaya plays an important role in bringing in a good number of people and convincing them to stay. That is why our infrastructure has tremendously improved in terms of facilities and research equipment. For instance, we have established research facilities equivalent to a Nobel Laureate laboratory. We have to do this because, if researchers lack quality facilities, they will naturally look elsewhere. Money is also a consideration for them and so we allow them to create spinoff companies. This means that although the patent belongs to the University, the establishment of a spinoff company allows them to commercialize the product from the research, where 70% of the profits go to the researcher and his or her team and 30% to the university. In this manner, we will be able to retain top researchers in the long run.

What are some of the programs in place to encourage entrepreneurship?

Entrepreneurship is not confined to students, but also involves the researchers and fellow staff. We have a new policy whereby PhD students, upon completion of their research, can return as lecturers or researchers. However, before that they have to adapt and observe the management process at the Vice-Chancellor and Deputy Vice-Chancellor’s offices, as well as learn the skills of managing their research projects. Of course, in engineering, for example, there are numerous products, which are of a high quality and have commercialization potential. In fact, we have our own commercial arm to oversee this, as well an innovation hub. In this manner, we are able to encourage entrepreneurship. With the help of the government, we seek to convert our commercial innovation hub to a Malaysian innovation hub. Then, hopefully before the ASEAN Economic Community (AEC) is declared in December 2015, this hub will have become the ASEAN Innovation Hub, to be shared with ASEAN countries for the commercialization of research projects in the region.