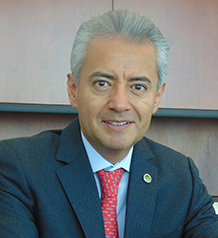 Francisco Pérez Cisneros was named CEO of the Mexican member firm in June 2013, after serving as the National Audit Managing Partner from 2010 to 2012. With over 30 years at Deloitte, Francisco has held a variety of roles including Consumer Business Leading Partner in Latin America, as well as member of both Deloitte’s México Board of Directors and the Executive Committee. Cisneros graduated from La Salle University with a B.A. in accounting. He has also completed executive programs at Columbia University, Northwestern University (Kellogg), and the PanAmerican Institute for High Business Direction (IPADE). He is also a Certified Public Accountant.

Share on:
TBY talks to Francisco Pérez Cisneros, Director General of Deloitte, on how Mexico is facing up to its historical challenges.

What makes Mexico a growth market for Deloitte, and what is its potential?

We are still an emerging economy, which is why we are considered a growth market. Our proximity to the US economy means that Mexico is going along. Macroeconomic conditions have been stable, inflation has been controlled for a long period of time, and our international reserves are meaningful. The US dollar has strengthened recently; however, Mexico does not hold much in US dollar deposits compared to other countries in Latin America. We shifted from being a country dependent on raw materials to manufacturing. Not long ago, 60% of Mexico’s economy relied on oil exports, but that has now been reduced to 15%. Even in Chile, which has an important and stable economy, more than 50% of exports consist of primary goods rather than manufacturing.

What are the biggest challenges for doing business in Mexico right now?

Our core business is helping our clients. This does not necessarily mean solving problems, as we can also help tackle new challenges that may not necessarily be a problem; helping clients grow and evolve is a challenge; however, not a problem. Every quarter, we do a survey in Mexico of the major companies and executives, and one of the topics that we discuss is what the major challenges are. The top challenges for the top executives within the country are corruption and insecurity. These are not economic challenges, but rather social issues. The economy is doing well in spite of this, but these are the major concerns that our executives and entrepreneurs have. We have clients who are going overseas, and the economy is evolving so we need to cater to these new needs. We have been opening digital service lines so that retailers can interact with their customers following a multiple channel strategy. We are evolving technologically as a society, and Deloitte helps in this regard. We need to be much more aware of climate change issues; for such we have sustainability services whereby we help our clients reconcile their normal company strategy with one that assists the community and society all together.

Is the level of corruption that people perceive in Mexico accurate?

In our survey, when asked how they saw themselves a year ago compared to now, 50% of executives say they are doing better, and 71% say they foresee themselves better off a year from now. We are doing well, and even though corruption is a cancer in Mexico’s economy, it is unfortunately everywhere in the world and is an issue that we need to tackle. The government is trying to address this now following high pressure from society that has resulted in steps being taken to address the problem. In 2015, we sponsored an economic event in Paris, and participants wanted to support and promote the Mexican economy. There was an international CEO of a Mexican subsidiary who said there may be corruption in Mexico, but we can do business without being corrupt. We have to bear in mind whenever we talk about corruption that there are two sides; the one being corrupted and the corrupting agent.

Will the energy reform positively or negatively affect the international interest in Mexico?

This reform would be much better if it came some years ago. That being said, it is still going to be good for Mexico. The dramatic decline in the price of oil impacts it, but these reforms go beyond the short term, and, in that regard, it will be beneficial. We expect more important investments in Mexico. There are companies interested, and it is going to ultimately be a welcome change. We need the same reforms to help us in having low prices for commodities such as gas, as that has also been helping our economy and curbing our inflation. It could have been better, but it is still a good move and will help our economy.