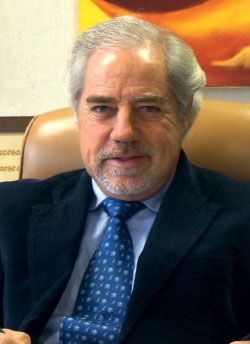 Founder, CEO, and Chairman of the Board, Velsimex

José Ignacio Escalante de la Hidalga was born in Mexico in 1953 and studied Veterinary Medicine at the University of Anahuac. He also holds a degree in Business Administration. He worked for Merck Sharp&Dohme in the agrochemical and veterinary area, and for Velsicol de Mexico. He joined Velsimex in 1988. He is the Founder, CEO, and Chairman of Board of the company.

Share on:
Velsimex is one of the top six companies in the agrochemical sector, and your competitors are all major multinationals. How do you remain competitive in such a market? We started […]

Velsimex is one of the top six companies in the agrochemical sector, and your competitors are all major multinationals. How do you remain competitive in such a market?

We started 25 years ago by importing just one technical product: chlordane. I had been working at Velsicol Chemical Corporation, which sold 80% of the company to Sandoz. Velsicol did not sell chlordane to Sandoz, and so we created Velsimex to distribute the product. It was a strong product used against termites, but as a technical product it faced opposition in the market and was withdrawn because as it was highly persistent. As Velsicol was the sole manufacturer in the world, we had been turning a good profit from the product and constantly reinvesting our profits to purchase new products, having observed independent companies from China and India. This enabled us to compete with the multinationals at that time, 25 years ago. Multinationals always have new products to launch on the market, which is their major weapon. Our major weapon has been my word, because everyone can sell a commodity, but if you honor your word you are standing by what your company promised.

How did your company develop over subsequent years?

In the past, Mexican companies were purchasing many of their products locally from multinational companies, or from a local government company called FertiMex, which manufactured about six insecticides. In the beginning, we were buying the technical product, passing it to another company that formulated it for us, and then marketing the product under our own label. Subsequently, we purchased our own plant and started to formulate the products ourselves. That was how we managed to compete with the multinationals; we imported technical-grade product, formulated it, and went to the market under our own label. We improved our market share by providing credit and offering conditions that customers welcomed. At the outset we tried to sell close to the price of the multinationals, while offering a much lower price to distributors. When a distributor sells a non-multinational product at the same public price, they enjoy the highest margins. My thinking when we began was that if I gave healthy profits to our distributors we would establish a distribution network for the future, which is precisely what happened. Today, Velsimex is the largest supplier to 60% of our 350 customers, which gives us the opportunity to create long-term relationships.

Have you created jobs directly or indirectly as a result of your growth?

We have grown rapidly as a result of importing technical products in our formative years. However, these days many other companies are doing the same, particularly from India and China, and we face stiff competition. Our plan is to continue developing registrations and manufacturing technical support at such a rate that we become the first or second seller of every product we offer, thereby increasing our margins. Another plan is to synthesize certain technical insecticides, fungicides, and herbicides. These are the two pillars on which we are planning to build the future of the company. Between our two plants, Agrí­cola Innovací­on, Velsimex, and Quimix we have more than 400 employees.

To what extent do you think the agrochemical market can help increase the agriculture sector’s contribution to the economy?

In Mexico, agriculture is not treated with the importance it deserves, and accounts for only 4%-5% of our economy, although over 40% of the Mexican population lives in rural areas. At the beginning of the 20th century, there were 1.6 billion people in the world. There are now around 7 billion people and the acreage more or less than same. The real difference is agrochemicals, the use of which produces a much higher yield. Major developments stem from new agricultural practices that include the use of agrochemicals such as fertilizers, insecticides, and fungicides. If more agrochemicals were used correctly in Mexico, the country’s crop production could improve significantly. For example, in some areas one hectare produces more than 14 tons of corn, while in Chiapas there is land where the yield is only 800 kilograms per hectare.