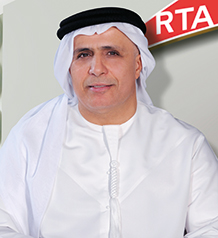 Director General & Chairman of the Board, Road and Transport Authority (RTA)

HE Mattar Al Tayer, a professional civil engineer, graduated from the University of Wisconsin in 1983 and holds an honorary fellowship of the British Institute of Civil Engineers (ICE). He was appointed to lead the RTA in November 2005. Prior to that, Al Tayer worked in Dubai Municipality, assuming several leadership roles and eventually becoming Deputy Director General. He participates on several boards and committees both at the local and federal levels. In September 2011, HH Sheikh Mohammed bin Rashid Al Maktoum bestowed onto Al Tayer the Mohammed bin Rashid sash for his efforts and achievements at the RTA.

Share on:
TBY talks to HE Mattar Al Tayer, Director General & Chairman of the Board of the Road and Transport Authority (RTA), on rail projects in the pipeline, a new water canal project, and going green.

Which upcoming rail project will attract the most attention?

The RTA’s efforts will cover all the elements of the transport system including public transport and road infrastructure, whilst focusing on integration between different systems and their surroundings. RTA is currently working on “Route 2020,” a 15.5km extension of the Dubai Metro Redline to the Expo 2020 site. The line also serves many major developments, including the Discovery Gardens and the Green Community. Other main rail projects that will be under consideration in the coming years include the Redline extension toward Academic City. RTA will also be procuring more trains to meet the fast-growing demand on the current metro system and will foster and expand the bus feeder system to serve the new metro stations. In addition, the bus network will be subjected to continuous optimization and expansion to serve newly developed areas. All these public transport efforts will support RTA in achieving its aim of holding a 20% share in Dubai’s public transport by 2020.

What opportunities does the Dubai Water Canal project offer to investors?

The Dubai Water Canal project will link the Business Bay District with the Arabian Gulf. It aims to strengthen the position of Dubai as a tourist destination and the new area is expected to attract 20 to 22 million visitors a year in addition to encouraging tourist mass transit, while maritime transport is expected to carry more than 6 million passengers per year. The channel will add 6km to the waterfront of Dubai, while the project will provide an area of over 80,000sqm dedicated to public spaces and amenities. Undertaken collectively by Meydan and Meraas Holdings, the project will feature a cast of deluxe luxury houses, footpaths, and cycling tracks, as well as deluxe retail outlets, luxury hotels, and gourmet restaurants.

What initiatives is the RTA launching to reduce the carbon footprint?

RTA recently announced its plan to convert 50% of Dubai’s taxi fleet into hybrid cabs by 2021. Also, the Dubai Metro will reduce CO2 emissions by over 770 tons per day by reducing the number of vehicles on the road and reducing congestion. Furthermore, the Dubai Tram lays claim to several firsts. It is the first turnkey tramway or light rail system in the Middle East. Its ground-based power supply system employs cutting-edge technology that energizes the current rail beneath the tram as it passes. This is considered safer than conventional overhead catenary-type systems, and encourages the public to use public transportation and reduces CO2 emissions. In 2013 the RTA deployed seven electric-powered buses fitted with electronic motors instead of the traditional diesel motors, and the project has been broadened to include 17 buses. Also, the RTA has launched CNG-powered buses instead of diesel-powered ones to improve the marine transit service between the two shores of the Dubai Creek. In relation to RTA public buses, we have started a trial for an electric bus powered by battery systems and a trial for a CNG-operated bus.

What is RTA’s strategy for the next five years?

We will continue improving Dubai’s transportation system with a particular focus on optimization and integration. In this context, RTA has established a transportation integration department that has the mandate to look after the integration of different transport systems and modes. In March 2016 we launched the Dubai Transportation Integration Manual, which established the guidelines and requirements of integration at different levels of area and project planning, design, and operation with a focus on improving travelers’ experiences within the first and last miles of their trips. The manual will be proactively applied to all of the RTA’s new projects and will be used to improve the levels of integration at existing metro and bus stations. The RTA’s strategy will also focus on improving services provided to the public. The RTA Smart City program, which includes introducing new applications and technologies, will contribute to the achievement of the Dubai government’s public happiness goal.