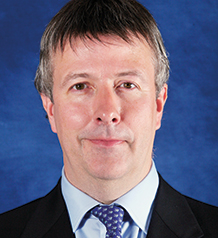 Richard S. Oliver is Chairman of the British Business Group. He has over 30 years’ experience in corporate, retail, and investment banking, based for most of that time in the EMEA region. He began his career in London, and later worked in Germany, Austria, Russia, and the UAE. Oliver has been based in Abu Dhabi since 2002 and currently works with a private office that he joined from the National Bank of Abu Dhabi. Oliver holds a first class masters degree in philosophy, politics, and economics from Oxford University and an MBA with distinction from the Cass Business School in London.

Share on:
TBY talks to Richard S. Oliver, Chairman of the British Business Group, on the opportunities in Abu Dhabi for British businesses, developing bilateral relations, and the similarities and differences between the two cultures.

What opportunities does the large public sector in the UAE present?

There is certainly a sense—for a trader or an SME coming to the UAE—that we need to carve out an identity and a niche here, but they are different in Abu Dhabi and Dubai. I would say Abu Dhabi is more interested in partnerships and taking an active role in business. Sectors concentrated in Abu Dhabi are oil and gas, defense and security, and financial and professional services. More recently, healthcare and education have become increasingly important, which in the past may have been more focused mostly on Dubai. Within the construction sector things have become more cost driven; at the higher end we do well, but at the lower end it can be more difficult for British companies to compete.

How are you trying to attract SMEs over here to support that sector?

The UAE UK Business Council has seven focus sectors. SMEs are defined as a sector in their own right, even though they operate throughout each sector of the economy. We are trying to attract SMEs both through a specific sector directly and as a class of business. We have set up, with the help of the British government, an entity called the British Centers for Business, which is so far represented in Dubai, with another planned for Abu Dhabi, and is an incubator for business. We also have sectoral advisors giving counsel to incoming businesses on market opportunities, offering market studies, and generally acting as a nexus for SMEs.

How might UAE and British relations develop with VAT coming in at 5%?

The drop in oil prices has presented the UAE with a need to find secure revenue streams, and, therefore, the decision to introduce VAT is a really positive development. It is a further part of the UAE’s evolution. We all know about taxes in for example the UK or US, and we know that 5% is not the end of the story. The tax will inevitably increase, but the UAE will adjust to that just as any other country.

What are some of the overall services that the group can provide to its members?

The BBG can assist companies in different ways. There are British companies in the UK that are seeking business in the UAE. The British government supports export businesses in a number of ways, and the group acts often as the first port of call as an adviser to newly arrived British companies in the UAE, or those thinking about entering the market. We hold events around visits by ministers and senior British representatives and act as a networking partner for businesses coming in. This is an entirely voluntary organization and people join to gain business connections, advice and general information. We provide the full spectrum of support, and we continually try to find new ways of making ourselves useful to the resident and visiting British business community.

How do you bridge the two businesses cultures between the UK and the UAE?

The cultures are indeed different, and regulation is a useful way to contrast the two countries. In the UK, some feel that there is now a little too much regulation, whereas the UAE is just at the beginning of this process. In both social and professional senses, the UAE is moving closer to the UK and other more developed economies. As a long-term partner, the UK still has plenty to offer the UAE, which at least in some senses is still a developing economy. We have tried a number of different experiments ourselves over the years, which the UAE can benefit from, such as privatization and public-private partnerships for instance, and we can also share our experiences where the results were not as successful as hoped. This is the real benefit for a country like the UAE, which is to leapfrog trial and error and implement proven solutions.