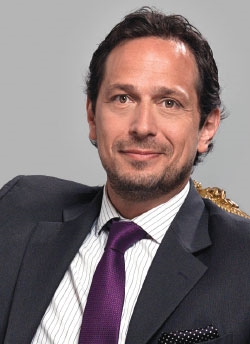 Martí­n Rosales is President and General Manager of Goodyear México, where among other duties, he holds responsibility for developing and executing business strategy, and supporting and realizing regional plans and projects. Previously, he had been General Manager of Goodyear Argentina since December 2011. Rosales had held management roles at companies such as Eastman and Kodak, where he was based in Mexico for three years, during which time he acquired wide experience and knowledge of the local market. Martí­n studied Marketing at the Universidad de Belgrano, Buenos Aires, Argentina.

Share on:
How has Goodyear evolved in the Mexican market since the 1940s? Goodyear has a relationship of over 70 years with Mexico, and this market has always been a vital one […]

How has Goodyear evolved in the Mexican market since the 1940s?

Goodyear has a relationship of over 70 years with Mexico, and this market has always been a vital one for our company. It was in fact one of the first markets that Goodyear arrived in beyond the US, and since then we have been leading it. Mexico is crucial due to its proximity to the US, but also boasts an interesting domestic market, which is the second largest in Latin America after Brazil, also in terms of tire volume. Mexico’s replacement business represents more than 18 million tires, and being attractive, has numerous competitors. Ours is an open market that has in place free trade agreements (FTAs) with key regions around the world. This simplifies both the production of tires in Mexico, and importing. Even though our main competitors in the industry, the large players, are producing tires in Mexico, more that 60% of total domestic demands is imported. In the case of radial truck tires, 100% are imported. This underlines just how convenient it is to do business with different regions across the world.

Do you have plans to invest in a new plant in Mexico?

There is such a possibility, and in mid-2014 we announced that due to our solid momentum and cash flow, we would invest in a new plant in the Americas to produce high value-added tires. Demand is set to increase over the coming year, and so as a company, we need to increase our production capacity. The plant will service markets in North America and Latin America, and we are in the final process of selecting its location. Mexico is one of the final candidates, and is a strong one. In terms of technology, this will be the best plant that the company has anywhere in world. It will produce complex tires, which requires the latest technology. The plant is required to enter production by 2017, and the final selection of location will be made at the beginning of 2015.

What recent changes have been made to your product portfolio?

We have a comprehensive portfolio and one of the most competitive ranges in the market. Due to the number of competitors, Mexico is a multi-brand market. In order to support this demand, we are managing three major brands, having divided the market into the three segments of premium, mid-tier, and economy. The first brand is Goodyear, and the second is Dunlop, which we launched at the beginning of June 2014 with three completely new product lines. It will give us about 80% coverage of the total market. Last but not least, we have Kelly, with which we compete in the third tier. Being more price-oriented we call it an economy model. We are leveraging these three brands to ensure a competitive portfolio that can lead each segment.

Which areas have the most potential for growth?

Mexico is destined to become a still more attractive market for automotive and tire companies. And in terms of applications, the two segments that are growing the most are sports cars and SUVs. Goodyear will grow here much faster than in other segments. In terms of value, it will be active in the mid-tier and premium segments, as the latter is seeing pronounced growth that can only accelerate over time.

What strategies will you need to remain competitive?

Goodyear’s strategy is based on three pillars. The first is the brand, as brand awareness in Mexico is crucial. The second is the quality of our portfolio, which is competitive in terms of quality, performance, and price. Price is also vital in Mexico, and we are competing aggressively on this variable. Lastly, we have a robust distribution channel through our dealer networks. Goodyear has a presence across the entire region. We are trying to have the right tire, at the right place, at the right time, and at the right price to ensure we are the consumer’s first choice. We also have a clearly defined segmentation strategy, rather than considering the market as a whole. The market has 12 segments, seven of which we are focused on leading. We currently lead the mid-tier segment across the market’s four applications. Meanwhile, Goodyear ranks among the top three in the premium segment.