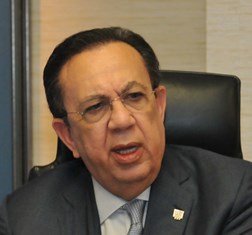 Captain of the Bridge

Héctor Valdez Albizú graduated in economics from the Autonomous University of Santo Domingo. He began his career at the Central Bank of the Dominican Republic (BCRD) as a technical assistant in the economic research department. Having risen through the ranks, he first became Governor in 1994. He was reconfirmed by then-President Leonel Fernandez Reyna in 1996 and appointed Cabinet Minister, occupying that position until 2000. He was reconfirmed in the role in 2004, 2006, 2008, and 2010, and again in 2012 by President Danilo Medina.

Share on:
The Central Bank of the Dominican Republic has provided stable stewardship for the island economy as it seeks to boost exports and attract FDI.

Can you give us an overview of fiscal year 2018 in the Dominican Republic?

From an economic perspective, 2018 was an excellent year for the Dominican Republic. We grew at 7%, the highest in Latin America and the world. This growth rate was obtained with a low level of inflation (1.17%), well below the lower limit set by the Central Bank. Regarding international reserves, we reached USD7.6 billion, the equivalent to 4.4 months of imports, far above our initial target. Our current account deficit is at one of its lowest levels in decades, about USD800 million, or 1.4% of GDP. In 2017, it was 0.2% due to low oil prices, but we saw a rebound in 2018 as the rest of the economy picked up. We have low levels of fiscal deficits compared to 2012. Poverty levels also dropped from 39.9% in 2012 to 23% in 2018, while critical poverty has declined from 9.9% to 2.9% in 2018. The economy generates a large amount of hard currency. Most of this comes from the tourism sector. In 2018, we saw 6 million tourist arrivals, making us the number-one Caribbean nation in terms of tourist arrivals. This generates USD7.6 billion in revenues. We saw diversification on the exports side as well as an increase in FDI over the last decade. On average, FDI is around USD2.5 billion per year. In 2018, we saw an FDI of USD2.513 billion.

What are the most pressing challenges that the country still needs to face?

One of the main challenges is improving competitiveness to promote access to other markets in terms of exports. Additionally, there is a governmental plan to promote 19 new measures to get more competitiveness in our exports. We are also making numerous efforts to improve education and develop new technologies. This can serve as a way to give more opportunities to young people. We also want to maintain local conditions to promote FDI and growth in the country. The Central Bank has a mandate to maintain a stable monetary system, keeping control over inflation, maintaining currency levels that do not impact the markets, and supporting a healthy financial system. Right now, the financial system in the country enjoys high levels of capitalization and solvency. In terms of our strategies for maintaining macroeconomic stability, we have a proven monetary policy based on the inflation targeting regime that we started in 2012. We also have prudent fiscal management, and we have seen consolidation across fiscal accounts. These two policy arms are working together to promote and maintain stability within the Dominican Republic.