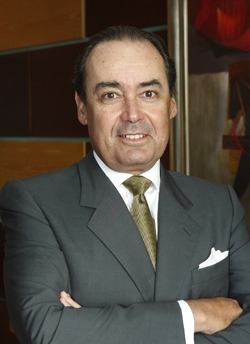 Walter Bayly was named CEO of BCP and COO of Credicorp effective April 2008. Before becoming CEO he was the CFO and previously held various other management positions within BCP. He joined BCP in 1993 after three years at Casa Bolsa Mexico, where he was Partner and Managing Director in Corporate Finance. Prior to that, for 10 years he was with Citibank in Lima, New York, Mexico, and Caracas, where he worked primarily in corporate finance and loan syndications. He received a Bachelor’s degree in Business Administration from Universidad del Pacifico in Lima, Peru, and a Master’s degree in Management from the Arthur D. Little Management Education Institute in Cambridge, Massachusetts.

Share on:
"We have always been proud of our ratings and of the fact that BCP has survived for over 145 years."

Banco de Crédito del Perú (BCP) is one of the largest and oldest banks in the country. This year it purchased MiBanco, a microfinance firm. Could you tell us about BCP’s retail business?

Historically, BCP has been the largest bank with the largest share of the customer base among those customers who are already part of the banking system. We decided that rather than capturing a greater market share of the existing customer base, or taking customers from a competitor, we would focus on bringing more people into the banking system and enlarge the pie itself, as penetration levels were relatively low. This was a strategic decision we took about seven or eight years ago, and we have been working hard on it with great success. The penetration level in the banking sector has increased, and now we are at a level slightly higher than Mexico and comparable to Colombia. Growth has been substantial over the past couple of years because of the combination of two factors. We started at a low level of penetration, and the country has grown considerably. Thus, the banking system grew by multiples of GDP growth. GDP was growing at 7%, and the banking system grew at three and a half times that rate. It has been a period of furious growth and we have been a driver of that growth by bringing more people into the system. The problem was that our branch network was not located where people wanted it because we did not have the right distribution channels, prices, or products, prompting us to address these issues. During that process, one of the lessons learnt was that a segment of the customers is better served by specific business models, rather than by a universal, large bank, such as BCP. We bought a microfinance company called Edificar and subsequently expanded into buying MiBanco. Today, we have BCP as well as microfinance companies with different business models that are more appealing to certain groups of customers. We have been successful in bringing a substantial number of customers into the banking sector. We are in the process of understanding their needs better and being able to serve them better. That is the challenge we have been working on for the past seven or eight years.

How would you characterize the frontier market in Peru, compared to other parts of the world such as East Africa?

There is no universal set of best practices for doing this. The solution has to be tailor made to specific markets and local conditions. We did look at best practices in Africa and Asia, and tried to bring what we thought was relevant to our market. For example, one element that was tremendously successful was what we call the BCP agent. This model was invented in South Africa, but we localized it to our own market. It is a machine at any corner store where you can use your credit card to obtain cash. The money goes from the holder’s account to the storeowner’s account, and the storeowner hands over the cash. It is similar to an ATM, but without a cash component. That cuts costs dramatically. An ATM costs $30,000 and you need 200 transactions a day to break even, while this machine costs $500 dollars and only takes 20 transactions to break even. This enables you to have transactions at points where an ATM would not be profitable. We have about 6,000 of them installed across the country. In microfinance, there are two basic models: collective lending and individual lending. The market is more developed in individual lending. What you need at the end of the day is a practice called lend to learn. You have to learn by making mistakes, but you have to be careful that those mistakes are not large enough to jeopardize financial institutions.

“We have always been proud of our ratings and of the fact that BCP has survived for over 145 years.”

Earlier in 2014 Moody’s and Fitch upgraded BCP’s rating. What do those ratings represent in terms of your business in Peru?

We have always been proud of our ratings and of the fact that BCP has survived for over 145 years, despite the volatilities the country has undergone. This only reaffirms the importance of the bank in the broader economy. We are extremely conservative, not only in terms of the amount and quality of credit risks, but also in the level of capital decisions that we would like to work with, the level of liquidity we would like to handle, and the risks we take in general. The continuous upgrade is a recognition of the way we manage the bank.

Mexico has just joined the Integrated Latin American Market (MILA). What do you think the greatest obstacles for further integration are?

The obstacles there are related to security regulations. Conceivably they should be easy to solve, but regulators have a complex process, leaving some problems unresolved. For example, if you really want to push integration, the regulators of the three countries should agree that if a security is approved by one of the countries, then it is approved by all. Instead, in reality the regulators take the approach that they will only approve it if it is done their way. The other issue is taxes. There is unequal tax treatment for capital gains, interest, and the like. This is a tough issue to solve that usually requires changes in the laws. I do not have a big expectation that the actual integration of the capital market system is going to happen fast. I do believe, however, that if you talk to any large institutional investor in Peru, Chile, or Colombia, they already operate in either of the other two countries. They do not need a common operating process or one platform to invest in each other’s countries.

Where do you see the bank in three to five years time? Do you have any specific goals in terms of growth, revenue, or corporate and retail banking?

Following this period of very strong growth where we have almost tripled the size of the bank, we will see more subdued growth over the period you mention, making for growth of 12% to 15%. We want to use this window of opportunity to make sure that we operate efficiently, that our portfolio is of the desired quality, and that we have the right risk management practices. It is an opportunity to step back and make sure that all of our basic structures and procedures are right, and that we are ready for the next step. We have been doubling the size of the bank every three years, which puts strain on processes, systems, and human resources. I would add a note of optimism here, in that the way in which the government manages its public finances, the way the banking system operates, and in the fact that there is no leverage in the private sector. We would like to continue growing at 8%, but 5% is still a solid number and the country presents a tremendous opportunity going forward.