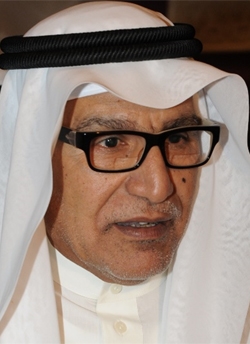 Dr Ahmed Al-Sanousi has more than 30 years experience as a Senior-level Director in the Contracting, Manufacturing, Healthcare, Trading, Commercial, Retail, and Service Operating sectors. He has been serving as a Senior Executive in positions of increasing scope, authority, and responsibility with direct involvement in the planning, development, management, operation, and maintenance of a large-scale, multi-organization system in an international setting. During the previous 10 years, Ahmed was an independent businessman involved in planning, initiating, and operating several small to medium-sized retail and service companies. Ahmed is an entrepreneur with demonstrated skills in strategic planning, business development, financial planning, management, marketing, communications, personnel administration, sales force management, and contract negotiations.

Share on:
"Beyond having a social impact, it will also have an economic impact."

How has the Prince Sultan Cultural Centre (PSCC) project evolved from an exhibition center into a massive multi-use real estate development?

It was initiated by HRH Prince Khaled Al-Faisal in order to have a Jeddah exhibition and convention center. The idea started from this, but that was during the late Prince Sultan’s life. We wanted to do something that carried on his name because he was well known for his charity and his support. Projects such as this are normally executed by a city’s municipality, or by the Chamber of Commerce, because they don’t usually make money as a development. Such projects only benefit the city once you have an exhibition; they become part of your tourism sector. At that time, we thought we had to have another business opportunity that could support this project and sustain itself. From that, we knew we had to create more business-oriented projects. We thought about what Jeddah needs and what it is known for. In the early days Jeddah was also known for its healthcare tourism. There were more private hospitals located there than in any other city in the region. We decided we should revive this business again, and hence we looked at establishing a medical park. Having the two anchors, namely conventions and exhibitions, and secondly the medical aspect, this megaproject was one of a kind. Our aim was to add value to both Jeddah and the country as a whole. Also, the different components needed to compliment each other. We worked to bring in top medical operators from the US, such as the Methodist Hospital from Texas. They are leaders in certain areas, such as cancer and heart disease. To achieve this high standard of healthcare, we also needed to bring in doctors. There are outstanding doctors here. Then, we needed to have proper housing and lifestyle options for them, and from that, proper schools for their children, and then universities, and then shopping centers. In this way, the project came together as a lifestyle and wellness concept. We have a large park as well, and we decided to use that. We wanted to introduce golf to Saudi Arabia; therefore, we established a golf academy where people could learn and play golf. Secondly, We wanted to make this city a benchmark for the future. We did a lot of work in terms of investment into how to make this city a smart, environmentally sound city. We are introducing new systems, such as district cooling, automated garbage collection, water and sewage, fiber optics, and telecommunications technology. It really is a unique city.

What economic effects will the PSCC have on the city of Jeddah?

Beyond having a social impact, it will also have an economic impact. We are not developing the whole project ourselves; we are developing the city, but we are also giving the opportunity to businesspeople to come and invest. They are the ones that are going to develop the hotels, schools, and sub-developments. In this way, we have created a chain of economic impact for the businesspeople of Jeddah. We have created the opportunities for companies and businesspeople to come and invest. This project will also have an impact on employment. With this and the medical park, we have created 5,000-6,000 jobs. We have created opportunities for people to work in the hotels, restaurants, medical facilities, exhibition spaces, and much more. Again, it is the aim not only to produce profit for the investors, but also for other reasons—we are creating jobs and a lifestyle for our children.

“Beyond having a social impact, it will also have an economic impact.”

How much interest is there from investors in the project?

Around 70% of the project is already committed. This is from local and international investors. We aim to have international associations. For example, for the medical development, any party that wants to come in and invest in a hospital has to have an international partner. With this, we have attracted foreign investment from Europe—Austria, Germany, and France. Even the hotels, schools, and exhibition areas have international operators as our partners. They are bringing in their own equity. We have already started construction on some of the projects, including the mall. The mall is local, but it is a strong operator. We have started the infrastructure and cultural center development work. We have also started the design work for the project, including for the hospitals, schools, and universities. Hopefully by the beginning of 2015, we will start to see construction coming out.

We are hoping to have people living and going to school here by the summer of 2017. By the beginning of 2018 the hospital will be open to the public. We are hoping that it will be three to five years maximum for the project to open. The project is being developed on a lease basis; therefore, participants are now paying rent. The components depend on each other. For example, the school needs the housing, and the housing needs restaurants. They are all connected, and as such they have to finish at the same time.