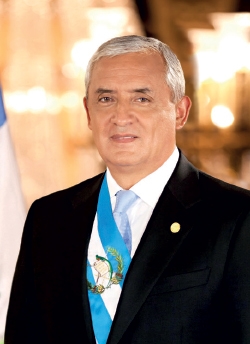 Center of the Americas

Otto Fernando Pérez Molina began his military career in 1966, distinguishing himself through discipline and leadership skills before going on to complete studies in defense and international relations in the US and Costa Rica. In his capacity as a senior military leader, he was instrumental in the re-establishment of democracy in Guatemala in the mid-1980s, and in 1993 was declared one of the top ten personalities of the year by the Chamber of Free Enterprise of Guatemala. In the late 1990s he became head of the Guatemalan delegation to the Inter-American Defense Board, and was awarded with the Guatemalan Army Cross, before retiring from the force with the highest honors. Following the foundation of the Patriotic Party in 2001, he has held a number of important public roles, finally becoming president of the republic in 2012.

Share on:
Colombia and Guatemala signed a Free Trade Agreement in 2007, which was subsequently ratified in 2009. The treaty initially allowed 53% of fisheries, mineral, fuel, vehicle and chemical products to […]

Colombia and Guatemala signed a Free Trade Agreement in 2007, which was subsequently ratified in 2009. The treaty initially allowed 53% of fisheries, mineral, fuel, vehicle and chemical products to circulate without tariffs, a percentage that was to rise to 70%. Could you evaluate what this Free Trade Agreement (FTA) has achieved for both nations?

The FTA you mentioned has just opened the door to future and deeper trade links between both countries. Ever since we signed and ratified it in 2009, commercial and trade ties have become stronger and we have seen an important rise in the arrival of foreign investment from Colombia in projects such as electric energy infrastructure. I think the FTA was great news for both countries, and will become an even more relevant trade tool for them.

The Colombian government has been helping Guatemala improve its training of police officers and use of crime-solving technology and intelligence since 2011. Could you comment on the goals of this alliance, and on other sectors in which both nations could deepen their relationship?

Public policies regarding security are one of the main interests our country has in Colombia. Current excellent ties between the two countries have enabled us to take advantage of Colombia’s expertise in this field, and train our security officers and staff, while modernizing the public institutions that engage with these activities. I would also like to mention cooperation in the agricultural sphere; Guatemala is also a relevant coffee producer and we have learnt much from Colombia’s experience in this area.

In 2013 Guatemala reached an accord to eliminate visa requirements for Colombians. How has this been made possible and what mutual benefits do you expect from this decision?

By removing visa requirements for Colombian citizens, we have managed to make trade and tourist traffic between both countries more fluent and dynamic. I think Colombia has become a true leader in the region and this move confirms that the country has gained the trust of other regional countries to revoke any kind of barrier, and promote deeper ties between them and other countries. Finally, we view this step as one of the prerequisites to achieving one of our key national goals; namely to become a full rights member of the Pacific Alliance.