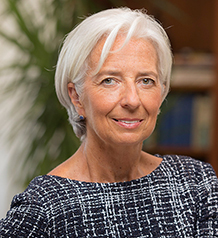 Christine Lagarde is Managing Director of the IMF. She was appointed in July 2011. A national of France, she was previously French Finance Minister from June 2007, and had also served for two years as France’s Minister for Foreign Trade. She served as chairman of the G-2O when France took over its presidency in 2011. Before then, she also has had an extensive and noteworthy career as an anti-trust and labor lawyer, serving as a partner with the international law firm of Baker & McKenzie, where the partnership elected her as chairman in October 1999.

Share on:
Christine Lagarde, Managing Director of the IMF, on the impact oil prices have had on the region and what that could mean for tax reform.

We are at a pivotal moment not only in the region but also around the world, and fiscal issues have really been taking front and center of the international agenda. More than fiscal, it is the issue of taxation that has been highly debated and has risen on the agenda of many countries. For those of you who think this is a recent development, I assure you that it is not.

I would like to talk about two ingredients of taxation for successful 21st-Century economies. The first one is the ability of countries to generate robust government revenue, which is, of course, the lifeblood of modern states. We all know that right now many countries have a pressing need to generate higher and more reliable revenue, although not necessarily for the same reason. For example, oil-exporting countries in this region are adapting to a new reality of low commodity prices. Developing economies need more domestic revenue in order to actually realize the goal of sustainable development. Some advanced economies, particularly in Europe, are relying heavily on fiscal resources to provide services and generate financial stability. So that’s the first ingredient, the ability to generate significant and reliable taxation.

The second ingredient is very peculiar to the 21st century, and it relates to international taxation and how our national tax systems, which are associated with sovereignty and, therefore, operate within territories, can adjust to improving trade and the movement of people and capital across borders. Many of you have read recent headlines and now reports concerning the likes of Google, Starbucks, or Ikea, because specific international tax issues have been raised by these companies that operate across borders and can actually take advantage of loopholes in international tax treaties. That does not necessarily mean they are acting illegally, but certainly in a way that optimizes the discrepancy between different tax positions. We need a system in the 21st century that discourages overly aggressive tax competition among our countries, because that overly aggressive tax competition eventually operates to the overall detriment of international tax and the generation of revenues by individual countries.

In 2015, our staff at the IMF estimates that oil exporters in the MENA region have lost more than $340 billion in oil revenue from their budgets, amounting to 20% of their combined GDP. Not only have oil prices fallen by around two-thirds from their most recent peak about 18 months ago, but supply- and demand-side factors give us good reason to believe that those prices are going to stay low for an extended period of time. The size and likely persistence of this external shock means that all oil exporters will have to adjust by reducing spending and increasing revenue.

Oil importers in the MENA region generate tax revenue of about 13% of non-oil GDP on average. That 13% compares with 17% in other emerging and developing economies. So there is scope for increased revenues at similar levels of development. That can be done by broadening the tax base, making personal income tax more progressive, and eliminating privileged corporate income tax regimes. These privileged income tax regimes can actually come back to haunt you as they can lead to a significant shortfall of revenue. It was estimated that the total cost of fiscal incentives for these privileged firms amounted to about 2% of GDP in 2012.

Domestic revenue mobilization is an imperative for countries that are seeking to achieve the new sustainable development goals. This is not a recipe in and of itself for reaching those goals, because it’s one thing to raise revenues and attain those thresholds, but it’s another thing to spend those revenues wisely and efficiently. To do that, we have seen that strong fiscal institutions and strong public financial management are key to achieving those goals.