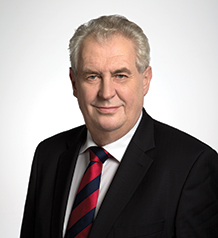 Miloš Zeman was elected as President of Czech Republic in June 2012 as part of the first direct presidential elections in the country. He established the new political party, Party of Citizen Rights (SPOZ), in 2009 and was elected its leader in 2010. Educated at the University of Economics in Prague, he graduated summa cum laude in 1969 and started to teach there. He had a long career in education and economics before being nominated by the Civic Forum to the Federal Assembly in 1990. In 1993, he was elected as the leader of the Czech Social-Democratic Party and was reelected in 1995, 1997, and 1999. In 1998, he was elected as Prime Minister of the country.

Share on:
TBY talks to Miloš Zeman, President of Czech Republic, on oil exports, industrial ties, trade, and building a solid relationship with the Azerbaijani government.

Azerbaijan is currently the second biggest oil exporter to the Czech Republic. How important is this relationship at the moment?

The fact that oil from Azerbaijan covers around one-quarter of the Czech annual consumption makes it a strategic partner that contributes significantly to the diversification of our energy resources. Our partnership with Azerbaijan, however, goes well beyond a simple case of oil supplies. This is only one part of intensive business-to-business and government-to-government contacts in many fields including trade and investment.

Trade turnover between the Czech Republic and Azerbaijan increased significantly from 2013 to 2014. What were the reasons for the increase, and what is your outlook for 2015?

Both sides are benefiting from a great combination of traditional Czech know-how and expertise in industry, transportation, and power generation, and of the astonishing Azerbaijani modernization effort. I expect a continuation of the positive trend and steady growth of the trade turnover.

In what areas is there the most potential for the Czech Republic and Azerbaijan to increase mutual cooperation?

I am glad that Azerbaijan is expanding its economic activities in the Czech Republic. We welcome Azerbaijani investment in our country and hope that there is even more to come. As for the Czech Republic, I hope that we will further increase not only the volume of exports, but also the direct involvement and investment of Czech companies in Azerbaijan. More specifically, I am convinced that we should focus mainly on the energy and infrastructure sectors.

As steps are made toward the development of the Southern Gas Corridor, what role do you expect Azerbaijan to play in supplying Europe’s growing energy demand?

We consider Azerbaijan a strategic supplier of energy not only to the Czech Republic, but also to the EU as a whole. Therefore, we hope that the new infrastructure will be operational as soon as possible. The Southern Gas Corridor is de facto the only project under construction that would bring new substantial energy sources to the EU.

The European Games in Baku is the first event of its kind in Europe. How important is this event for the development of Azerbaijan on the international stage?

When it comes to the European Games in Baku, my personal priority is the highest possible number of medals for the Czech athletes. On a more serious note, such an event is generally a great opportunity to present a country and its capabilities to the international public. So I wish all the best not only to the Czech athletes, but also to the organizers!