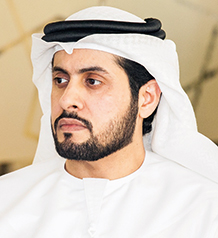 Khalifa Bin Salem Al Mansouri is the Undersecretary of ADDED. Prior to his appointment, Khalifa Al Mansouri held senior leadership roles with various government organizations within the Emirate of Abu Dhabi, which were mainly in the fields of economics, investment, management, and strategy. Al Mansouri holds an MBA from the University of Pepperdine, US.

Share on:
TBY talks to Khalifa Bin Salem Al Mansouri, Undersecretary of the Department of Economic Development — Abu Dhabi (ADDED), on its plans to make the Emirate a better place to do business, the new industrial plan, and how it is fostering innovation.

Which economic sectors represent the bulk of FDI and where would you like to see investment flow in the coming years?

According to the Statistics Centre – Abu Dhabi, FDI increased by 8% to reach AED95 billion by the end of 2016. Data indicates that most economic activities last year registered positive investment flows, especially manufacturing, construction, IT and telecommunications, financial institutions, and insurance, which was despite the 13% fall in FDI flows in that same year. These statistics reflect the competitive business environment of Abu Dhabi. To create economic diversification, the government of Abu Dhabi is working on bolstering the economy and business climate to merge Abu Dhabi with the international economy by attracting more foreign investment with more focus on the sectors that were specified in Abu Dhabi’s Economic Vision 2030. The Abu Dhabi Investment Office, under ADDED, is working on a strategic plan for the Emirate to attract FDI in non-oil strategic sectors. To achieve that goal, the Abu Dhabi Investment Office is working on promoting the Emirate as a global favored investment location and providing value-added services to potential investors. Abu Dhabi depends on FDI coming from Europe, which makes up 14% of the total, compared to 8% from Arab countries, 3% from the GCC, and 10% from Asian countries. In close collaboration with the Ministry of Economy, every year ADDED organizes and participates under the UAE Pavilion at Hanover Messe, in Germany, one of the largest specialized industrial fairs in the world. We also send delegations to Japan, China, Korea, and India, some of the biggest target markets in Asia, in addition to participating in the Annual Investment Meeting Dubai (AIM), an important platform that many countries participate in. The Abu Dhabi Investment Office plans to organize The Abu Dhabi Investment Week in a number of countries that have special economic relationships and large projects with Abu Dhabi in order to promote investment opportunities in the Emirate.

How will the new industrial plan propel Abu Dhabi’s manufacturing and exporting sectors and what role does the plan play in the Emirate’s diversification efforts?

ADDED, represented by the Industry Development Bureau, takes into consideration all factors that support the industrial sector and targets specific activities that contribution to Abu Dhabi’s Economic Vision 2030. During the upcoming term, Abu Dhabi’s industrial strategic plan focuses on providing a supporting environment for the industrial sector in priority areas such as industrial financing, protecting intellectual property, and foreign property laws. The aim is to support investors, bolster competitiveness, and achieve the industrial strategy. The manufacturing sector grew by 0.5% between 2015 and 2016, from AED50.3 million to AED50.6 million. Manufacturing accounted for 6.9% of GDP in 2016, which demonstrates the importance of the sector to the wider economy.

What are some of the leading initiatives ADDED supports to foster innovation in Abu Dhabi and promote the funding of SMEs and start-ups?

The Takamul program, which was launched in 2011, has implemented many activities since its launch, including supporting patents and enforcing the connection between inventors and concerned sectors, in addition to a continuous effort to improve the services it provides to inventors, universities, and other parties concerned with inventions and managing innovation pockets in many major local companies. Takamul’s support for patents starts with registration at the patents office in the Ministry of Economy, where the program pays for the initial registration fee and lawyer fees to handle the details of the invention and respond to appeals against the patent. Takamul has supported more than 200 patents since 2011 and approved 60 patents in 2017. In addition, the program includes many new projects that ADDED plans to launch during 2017, and Takamul has a dependable financing application that includes establishing intellectual property rules, implementing an in-depth commercial value analysis, and building and executing a business plan.